On April 25, 2015, an earthquake of magnitude 7.8 struck Nepal, causing catastrophic damage in Kathmandu, the capital city, and creating mudslides and avalanches in the Himalaya Mountains. According to World Vision, a humanitarian organization which aims to aid children, families, and communities in need, nearly 9,000 people died and more than 22,000 suffered injuries. The quake was followed by countless aftershocks, including another major earthquake with a magnitude of 7.3. More than 600,000 homes were destroyed and 288,000 were damaged in the 14 worst-hit districts. The worst impacts were in rural areas, where natural disaster response was extremely challenging.

Nepal is a country of constant earthquakes. Although most earthquakes tend to be of small magnitude, there are several that leave a lasting impact, such as the 1934 earthquake of magnitude 8.2, 1998 earthquake of magnitude 6.8, and the previously mentioned 2015 earthquakes. To make matters worse, Nepal is a mountainous country, created by the collision between the Indian Plate and the Eurasian Plate. Earthquakes block roadways and passages, making it almost impossible to provide first aid and supplies to remote villages. It is often dangerous for non-governmental organization (NGO) volunteers because of the lack of information about road conditions. Therefore, there is a great need for an alternative method of transportation: drones.

I first heard about this dire situation through an engineer volunteering in Nepal. He was collaborating with Africa-Asia Destitute Relief Foundation – Nepal (ADRF-Nepal) to initiate one-to-one connections between Nepalese children and worldwide sponsors. After realizing that drones could change the outlook for natural disaster relief in Nepal, I put forth my ideas to the engineer. He suggested that I look for ways to collaborate with ADRF-Nepal, so I quickly contacted the NGO to see what could be done. Within several months of discussion and planning, I was able to secure a few days in Nepal working with ADRF-Nepal. I was assigned to teach at two schools in Nepal, one in Kathmandu and one in Bhumimata, a small mountainside village. The purpose of the class was to educate young Nepalese students on basic drone engineering, providing a platform on which they can explore further into drones or related engineering subjects. The course material and curriculum were up to me to create within the remaining time.

With the help of a generous CSGC grant, I spent the last month developing an educational drone that elementary and middle school students can make and understand within a two-hour class. Initially, I concentrated on creating a standalone micro quadcopter that uses an Arduino and Bluetooth to fly. My first prototype was based on Montvydas’ Instructables, featuring a much smaller frame but with similar design and protocol. However, because South Korea’s RC market is much smaller than the United States’ market, I was not able to obtain several crucial components that were used in the Instructables and had to substitute with other similar parts. This proved to be ineffective, leaving me with a less powerful micro drone that could barely hover. Because I was worried that Nepal’s high altitude (therefore less dense air) would leave my first prototype stranded on the ground, I decided to design and build a quadcopter from scratch. 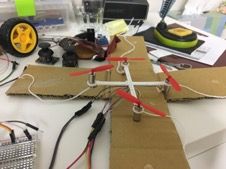 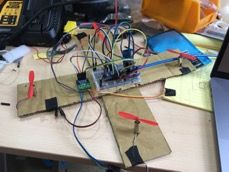 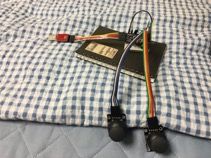 For the next two weeks, I researched and taught myself the inner workings of a drone. There were many factors to consider when designing a quadcopter, the most important one being the tradeoff between power and weight. The more powerful a motor is, the heavier it will be; similarly, the more powerful a battery is, the heavier it will be. I had to find the right balance between weight and power. Another factor to consider was pulse-width modulation (PWM). PWM is a method used to control the speed of motors by switching them on and off at a certain frequency. Although I could have simply used a drone flight controller such as the DJI Naza-M V2, flight controllers are too complex for elementary school students to understand. Therefore, I had to use an Arduino to control the drone and write code to implement PWM. It was here that I hit a wall.

The professor suggested that I look into the use of metal oxide semiconductor field effect transistors (MOSFETs) in PWM control, which I spent the next weekend studying. Specifically, I researched N-channel MOSFETs, which are devices used for switching and amplifying electronic signals. They consist of four terminals (gate, drain, source, and body), and when voltage is applied to the gate, current flows freely between the source and the drain. Therefore, I could connect a 3.7V lithium polymer (LiPo) battery to the source, connect the motor to the drain, and apply variable voltage on the gate using an Arduino. The MOSFETs not only need to withstand the voltage and the max current, but also have a low threshold voltage so that it can be switched on using the 5V Arduino output. One MOSFET that matched this output was SQ2310ES-T1-GE3, but I was not able to find a seller in Korea. Instead, I used the common IRF530N, which met the voltage and current limits, but had a high threshold voltage. Because the Arduino had 5V PWM output pins, I used a voltage step up (XL6009) in order to achieve high voltage input (27.5V). I had finally made a PWM motor controller that could spin my motors without burning out. 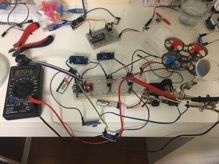 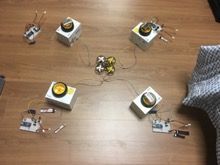 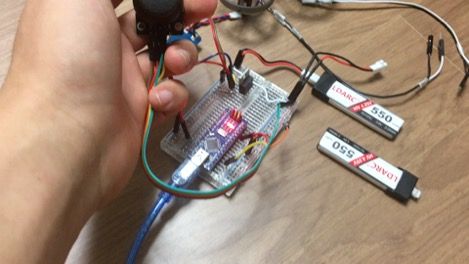 Excited, I tested a variety of different propeller designs with the current setup to maximize upward thrust. Connecting the four motors to each controller, the drone featured a TinyWhoop micro drone frame with 8520 coreless DC motors, with each Arduino taking input from a joystick. With individual motor movement, students would be able to better understand the combinations of steps needed for specific drone movements. The code was designed simply enough that they could write pseudocode which I could translate into Arduino code, while teaching them basic coding at the same time. The drone was small enough to be safe to fly inside a classroom while being tethered in order to prevent any accidents from happening. The design stage was complete. 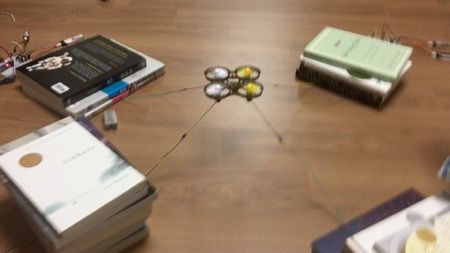 Now began the hunt for a sufficient supply of parts. Listing out the components used in my final prototype, I ordered enough to make a drone in each class. Because Nepal is a country full of cultural heritage, drone rules are very strict. In order to fly a drone outside of one’s own property, one must possess a license, which allows them to fly in certain regions. These licenses also open up various job opportunities as a professional drone educator or an engineer. Therefore, I also bought twelve mini drones (Terran) in order to teach the students in Nepal how to fly a drone, as well as to provide resources for them to practice in order to receive the licenses. For the small village of Bhumimata, I bought a DJI Spark to donate for use during the aftermaths of an earthquake or other natural disasters. After receiving all the components, I began packing my bag, excited to meet my students and teach them all I knew.