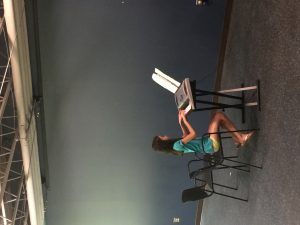 During the last few weeks of summer, I have been volunteering at a local student-run and non-profit organization called Roots of Music in my hometown of Wilton, CT. Founded by a handful of motivated musicians at the high school level, Roots of Music has strived to educate elementary and middle school students in a variety of musical genres such as classical and jazz music. With the immense influx of technological advancements in the past few decades, the lives of younger generations have been swarmed by TVs, smartphones, and tablets that have proven to decrease attention spans, promote social isolation, and negatively impact physical development. This is especially important for children whose first several years on Earth are critical for strengthening sensory, motor, and cognitive skills. In fact, according to an article written back in 2003 by the NIH titled, “Impact of Media Use by Children and Youth,” a child’s excessive exposure to technology can often result in a multitude of different mental and health disorders such as internet addiction and anorexia. However, not only does Roots of Music endeavor to be one of the many stabilizing forces amid the technology craze, but also it provides a suitable platform for kids to be physically engaged in active exchanges of ideas and emotions through music so that they can perpetuate the art in years to come.

During the summer of my sophomore year, I joined Roots of Music to continue the organization’s legacy and impact for the aforementioned reasons. For one week, the other high school counselors and I attempted to teach 30 kids ranging between four and nine years old the basics in instruments such as the piano, violin, and cello. At first, the task seemed impossible since all of the children were jumping and yelling all over the place during breaks and activities between lessons. Their hyperactivity had initially convinced me that they would obliterate the electric pianos and violins we had tried to buy with the minimal amount of funds that we had from bake sale donations. Furthermore, before the kids arrived at camp, all of them indicated what instrument they would be most interested in playing and how many years of experience they had with them. With an overwhelming majority of kids wanting to play the piano, I had been asked with teaching four elementary school children piano who all had 0 years of experience. Despite my initial reservations about how smoothly and successfully everything would run, I was miraculously able to pull back from my two years of piano experience back in first and second grade and teach the kids basic music theory such as reading notes and interpreting dynamics such as piano and forte. Ultimately, my first experience with Roots of Music culminated in a concert that featured all of the kids. Most importantly however, I was extremely happy to see all of them make incredible progress from barely knowing how to read music on the page to playing Yankee Doodle with both hands.

This year, I was grateful enough to have received a CSGC grant to continue working at Roots of Music. With thjs generous amount of money, we have been able to buy enough coloring supplies, snacks, t-shirts, and games for two weeks in order to make the camp more fun and engaging for the children. Everyday consisted of music related activities such as music theory games, music jeopardy, musical genre games, and rhythm games. Throughout the day, we would then pull out some of the kids and pair them up with counselors who would help teach them how to play a certain musical instrument. At the ends of each week, there is a concert for the parents that showcases how far each kid has advanced throughout the week. Once again, took in charge of four kids for piano and had zero years of experience. However, I felt more confident after my previous year trying to tackle the seemingly insurmountable challenge of teaching little kids piano.

Mariana, one of my first students during the day, was surprisingly able to catch on quickly to what I was teaching her. Last year, she seemed to be one of the more advanced students at the camp because of the few errors she made during her performance. Therefore, I tried to teach her how to play with both her left and right hands, interpret dynamics, and keep a steady rhythm when she played. During her performance this week, she was able to showcase most of the skills that I tried to teach her which will definitely challenge me to find more sophisticated material and piano techniques to teach her.

However, not all of the kids that I’ve been teaching have had a smooth experience so far. John, one of my other students, struggled with the fundamentals such as note reading, hand positioning, and hand-eye coordination. In order to address some of these issues, I first decided to find other ways of tackling his ability to read notes. Initially, I thought that making him tell me what the notes were on the page would be the best course of action, but no matter how hard he tried it didn’t seem to be helping. Instead, I brought him up to a white board and drew scales to help him see how notes were positioned relative to each other. I then drew his music on the board to make him guess what the notes were based on what I taught him using the scale. By making the process more interactive, I was able to see a marked improvement in John’s note-reading skills. Then, the next two problems were his hand positioning and coordination, which I decided to tackle by marking the piano keys with tape. Though this was a temporary fix for John, I hope that he will be able to take off his training wheels.

In the second week, I hope to further the skills that I’ve taught to my four students and continue see them improving upon what they have learned.