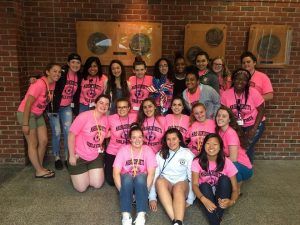 “Your vote would Mina (mean a) lot to me” reads my punny campaign poster, taped on the center column of the college dining common. Hundreds of fluorescent posters with catchy slogans decorate the once-bare walls, creating a disarray of colors that leaves one confused where even to look. I never imagined that I would ever be interested in campaigning for an election; frankly, the idea of setting myself up as an object of evaluation, vulnerable to the rejection of others, has always scared me. Yet somehow I found myself standing on a podium in front of 200 girls I had just met, convincing them why I was worthy of their trust and favor.

This past June, with the generous support of the CSGC, I had the privilege of attending Massachusetts Girls State, where I worked with incredible girls from all over the state who want to lead and serve their communities. During the week, we spent a lot of time learning from the stories of inspirational women leading their fields, but the most impactful experiences emerged through the opportunities to campaign for positions of “constitutional office”.

Coming into Girls State, I didn’t know what I wanted to accomplish during the week, and it was only with the immense support from my roomates that I agreed to run for the most prestigious position of the program: Governor. I was skeptical of what I could possibly gain from making a fool of myself in front of such an accomplished group of students, but this challenge from a motivational speaker lingered like an itch in my mind: “What would you do if you weren’t afraid?”

Through the week, my sense of achievement in simply deciding to run for governor grew into an open embrace of growth through making mistakes, striving for progress regardless of the final outcome. Even if I had not improved my ability to persuade, connect with, or speak in front of others, my experience at Girls State would have been worth it solely because of this realization: when I am not afraid of failure, there is very little else to fear. But of course, in running for governor, I gained much more than mere confidence; the trial-and-error process of noting what works in speeches and what causes strange looks during interviews has been invaluable. While I did not end up winning the title of governor (although I did make top three), I have learned so much about exploring options that I am unsure about, daring to reach for outcomes which I cannot foresee. So rarely does it feel like we are completely free to experiment with the unknown, to make mistakes with no academic, psychological, or social repercussions. Yet this is the perception of learning that I have brought back home from Girls State, in recognizing that I am free when I am not afraid to fall.

Continuing my interest in the political realm after Girls State, I’ve been working at the office of state representative Angelo Puppolo. While my eyes were opened to the sheer amount of bills Rep. Puppolo is constantly revising, editing, and advocating for, his genuine desire to help others has inspired me most. While constantly flooded with legislative duties, he is faced with a plethora of constituents seeking help with problems – unglamorous affairs such as insurance issues and housing unavailability. Understanding Puppolo’s work has lead me to appreciate the immense amount of patience and compassion those serving our state posses.
Admiring how they are subject to constant assessment and pressure, I maintain an enormous respect for those called into public service.