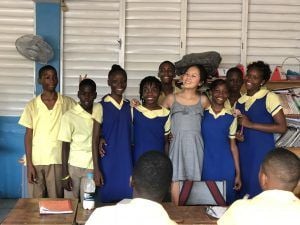 I remember, in 7th grade, I went on a school trip with the environmental club to see the famous mangroves of Jamaica. The guide took us on a boat tour through the beautiful shrubs to introduce us to the diverse ecosystem the mangroves foster. We saw many species of shellfish and birds that declared the mangroves their home. However, on our way out, we were faced with trash swarming the ocean, plastic bags and Styrofoam dominating much of the bay. The main source of this pollution comes from the lack of proper garbage management in many parts of Jamaica, resulting in trash from the streets running off with rainwater to the rivers and ocean.

This summer, I was given an opportunity by the CSGC to pursue a summer grant to address the concern of ocean pollution in Jamaica. My goal is to raise awareness about ocean pollution and help local schools develop a proper garbage disposal system by distributing garbage drums to schools in need of them. I partnered with the Jamaican Environment Trust (JET), a “non-profit non-governmental environmental organization in Jamaica focused on environmental education, advocacy and conservation”. They offered me two opportunities. One, to volunteer in helping host the JET School’s Environmental Program (SEP) Conference, and two, to provide bins for St. Michael’s Primary School in downtown Kingston.

Walking into the SEP conference, I didn’t know what to anticipate. I was told that most of the schools participating are elementary schools, so I thought it would be kids presenting briefly about environmental concerns. However, the conference went far beyond my expectations. Schools from all over Jamaica attended, some driving more than four hours to reach Kingston. Their projects were detailed, nothing like the small presentations I had in mind. Teams dressed up in costumes, brought carefully-made props, and carried music instruments for songs and raps they made for their presentation. Many topics were covered, including sugar cane burnings, Jamaican indigenous birds, and even organic pesticides and fungicides to treat diseases and to increase yield in gardens. I watched, alongside judges, and was impressed time after time on the amount of research and field work the teams did to prepare for the conference. Later, I had the pleasure of sitting with the judges during lunch as they discussed the results of the competition. They praised every project and admired the dedication of each team to their concern. After going over some critiques, we agreed that many students in Jamaica are talented but often shy due to their lack of exposure to conferences and workshops such as this one, and should be given more opportunities to public speak. During the awards ceremony, I was happy to learn that St. Michael’s Primary, the school that I will be buying the drums for, won an award for best garbage management even without trash drums. I left the conference knowing much more than I did when I came. I was glad to see students so young committed to helping the environment, and I look forward to hopefully working with them in the future.

As the second part of my grant, I worked the with the JET team in locating schools that lack the financial support to have a garbage disposal system, and bought trash drums for those schools to use with my grant money. However, with the one month I had in Jamaica, we were only able to track down one school in Kingston that the JET could reach out to for the grant, St. Michael’s Primary. I was grateful that the school accepted this offer, and they were beyond willing to work with me on the project. My first step was tracking down which company to buy the bins from and their pricing details. After speaking to many companies, one company suggested that I asked around for used drums instead of purchasing brand new ones. I learned that typically, new drums serve as storage for water and food, and used drums are usually in good condition, and would be more suited as trash drums, at a lower cost. After two weeks of contacting the JET, St. Michael’s Primary, and the drum company, of planning transportation and storage of the drums, and of setting a date with the school and writing a speech for my presentation, I was off to St. Michael’s. Upon arrival, I discovered that the school was a small and close-knit community. As we unloaded the drums, kids offered to help and rolled the drums to their building across the parking lot while laughing and joking with each other. I met the principal soon after, and was guaranteed an opportunity to speak in their daily morning assemblies. In my speech, I congratulated them on their award, talked about pollution and its effects on Jamaica and other countries, and thanked the school for their hard work for both the conference and for being conscious of the environment. After finally saying goodbye, I headed home. Next year, I hope to continue to support schools around Jamaica with this project. In addition, I want to do more for these schools through donations of books, school supplies, and anything else to support the education system.

I am very thankful for these opportunities made possible with the help of the CSGC summer grant program and the JET team. I am happy with the results from this summer, however, there is always more left to do. Along with moving forward with this project, I would also like to speak to popular supermarkets in Jamaica about their use of plastic bags. I realized time after time, employees often use many more plastic bags than necessary. I hope to distribute reusable shopping bags throughout supermarkets and encourage employees to use less plastic bags when bagging groceries. Pollution still remains a major issue in Jamaica, I hope to do whatever I can to continue to spread awareness and take action in hopes of a cleaner Jamaica.