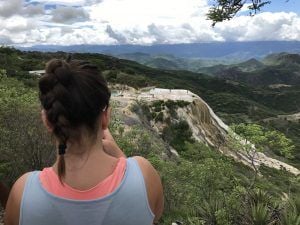 Maya Laur ’20 reflects on her experience in Oaxaca and the strong connections she has made.

I push open the shade of the plane window. The cool blueness of dawn filters into the fluorescently-lit vessel. The runway cuts through the Oaxaca planes, reaching out in front of us to greet the shadowed mountains. We turn a corner and suddenly a thousand tiny lights stretch before our eyes, the city still fast asleep in the distance. The engine begins to sputter, a rumble that rises from the tarmac until the sky shakes with anticipation. And then wheels scrape asphalt and we are off. Soaring into the air, leaving the city and its people far below us. From here, Oaxaca is just a strip of light in a mass of grey-blue clouds and swirling shadows. But I know there is so much more hidden beneath the streetlights below.

I close my eyes and calenda music fills my head, symphonies of trombones and drums beating out traditional Oaxaca rhythms. Orange and pink skirts swirling around me. University students throwing candy to spectators in the streets. Handcrafted marmotas (floats) marching to the rhythm of the base drum. One block down, tourists munch on chapulines and are startled yet excited to find out that they are indeed dead crickets while market goers sip cacao tejate and eat guava mole by the spoonful. The music drifts past the outskirts of the city to the Pueblecitos, where townspeople trade stories in open-air coffee shops. Sapulteca floats over the mountains and indigenous women craft ceramics from lumps of clay. The ghosts of their ancestors drift through the pyramids of Monte Alban, watching tourists, their own descendants, and the children of the Spanish conquistadores alike climb the ruins of their once-great city. One hundred and forty eight miles below, on the coast, surfers ride frothing-blue waves to shore while street-vendors sell hand-painted wooden turtles (alebrijes) in sandy markets. All of Oaxaca buzzes with music, color, and culture. I see it pulsing with life from 30,000 feet in the air. 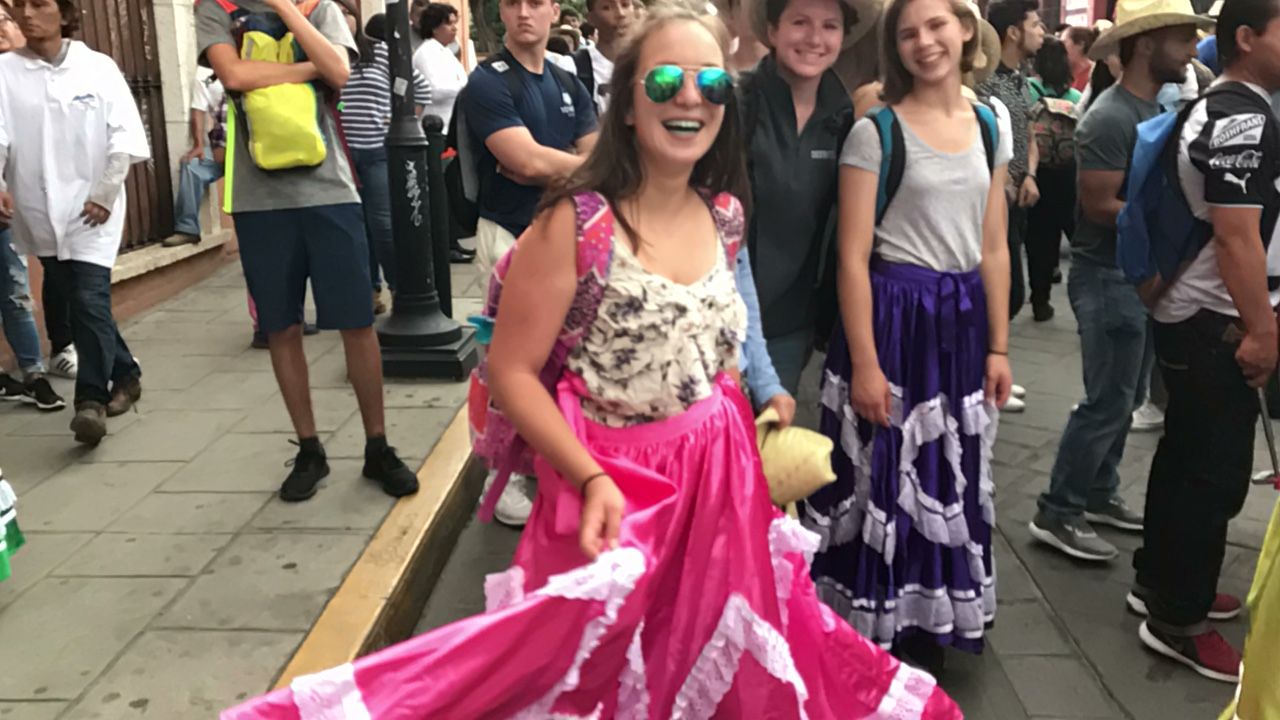 The plane begins to gain altitude and the city blurs into the gold and white of the rising sun. Home doesn’t feel so far away now. From this distance, though, “home” isn’t limited to the boundaries of Massachusetts but is in fact the entire planet earth. The land below me stretches far beyond Mexico’s limits on a map, connecting Oaxaca to my house in Western MA. From 30,000 feet in the air the borders below blur together; seem somehow less significant. We all walk the same Earth after all, share our sadness with the same stars, whisper wishes to the same oceans. Yet some of us in the United States hide behind these borders rather than embracing them. We see them as a reason to reject calenda music and colorful skirts, mole and Spanish lessons. We look at artificial lines on a map and envision a wall where there could be a bridge. Yet, in crossing the border that separates us from Mexico, our group has chosen to build a bridge. And, every time we speak to a street vendor in Spanish, or learn how to cook Oaxacan tortillas, or dance to the beat of the calenda base drum, we take a brick from the walls that divide us and add it to the bridges that connect us. 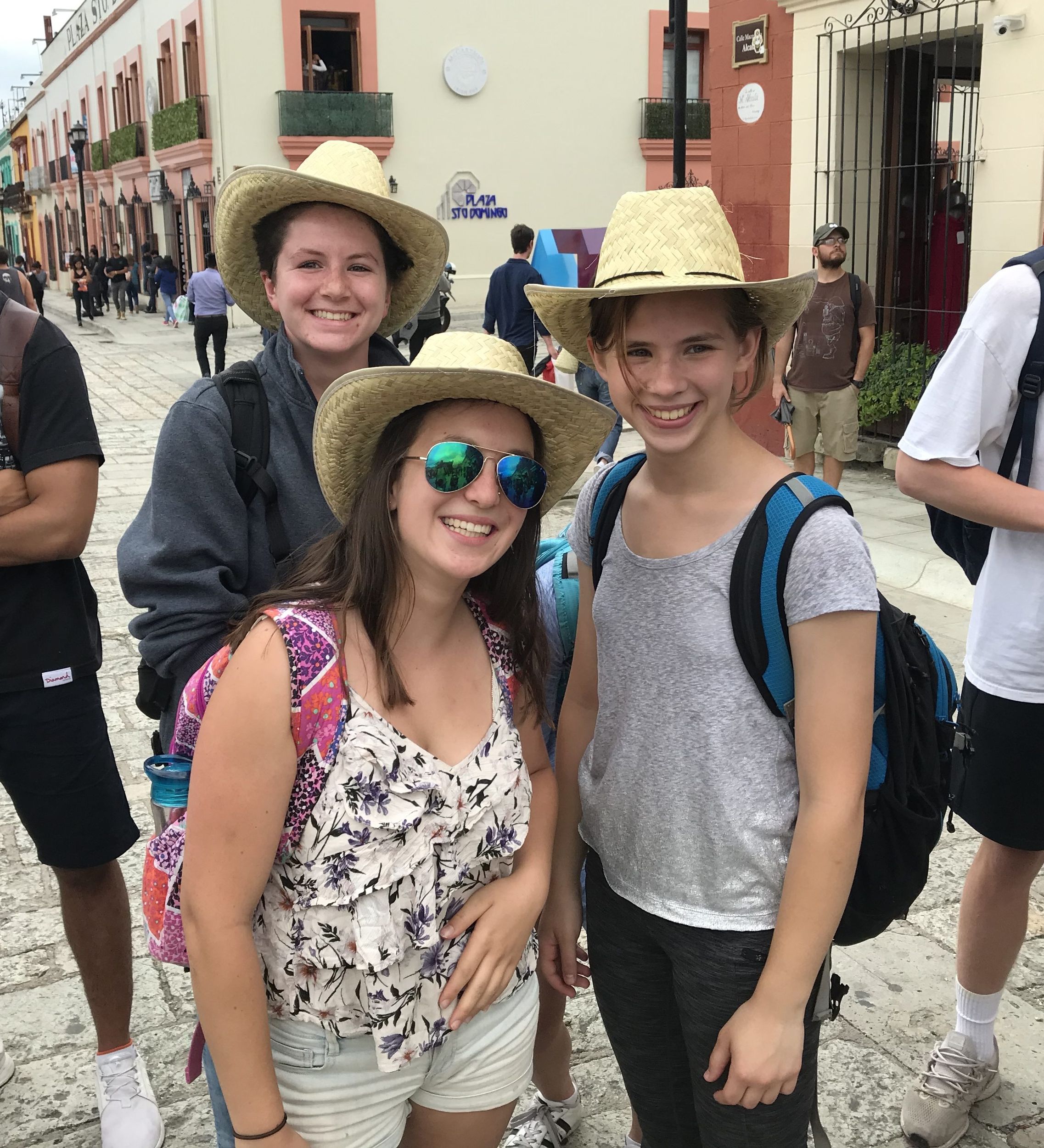 Now, as the airplane speeds across the border in a matter of seconds while immigrants below wait days in uncertainty to cross, unsure where their children have been taken to or if they will survive the deadly desert sun, I make a promise to them: to continue building bridges between us. I carry with me my host mom’s stories of hope and struggle, my black mole recipe, my newfound knowledge of Spanish, and more to share with my fellow Americans. So that one day all people will look down at Mexico from an airplane and see its people not as foreigners but as family – to be welcomed with open arms that reach across borders and are stronger than man-made walls. Because when we view the world from a new perspective, we realize that we are all shared inhabitants of this one planet Earth that we call home. 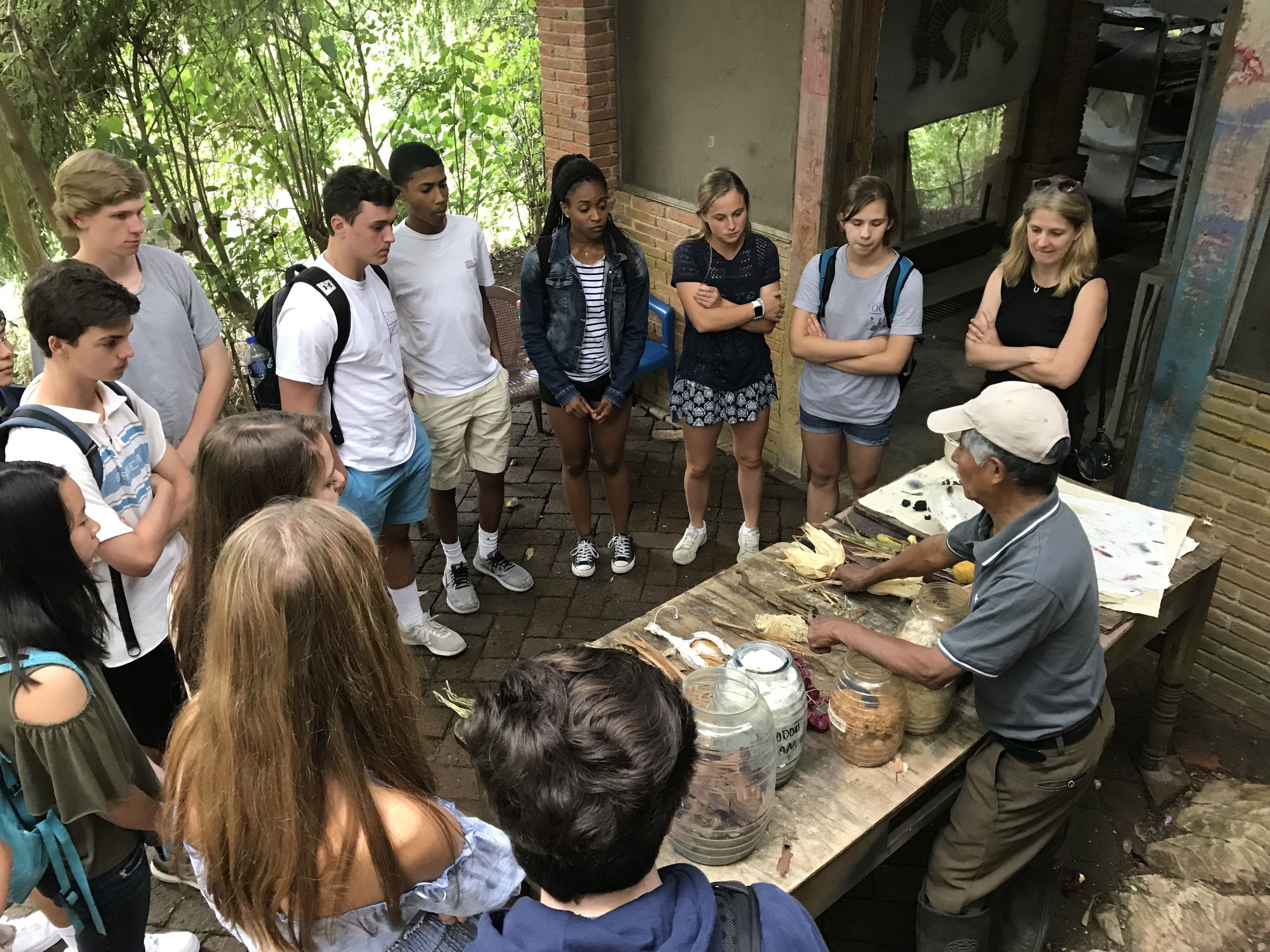 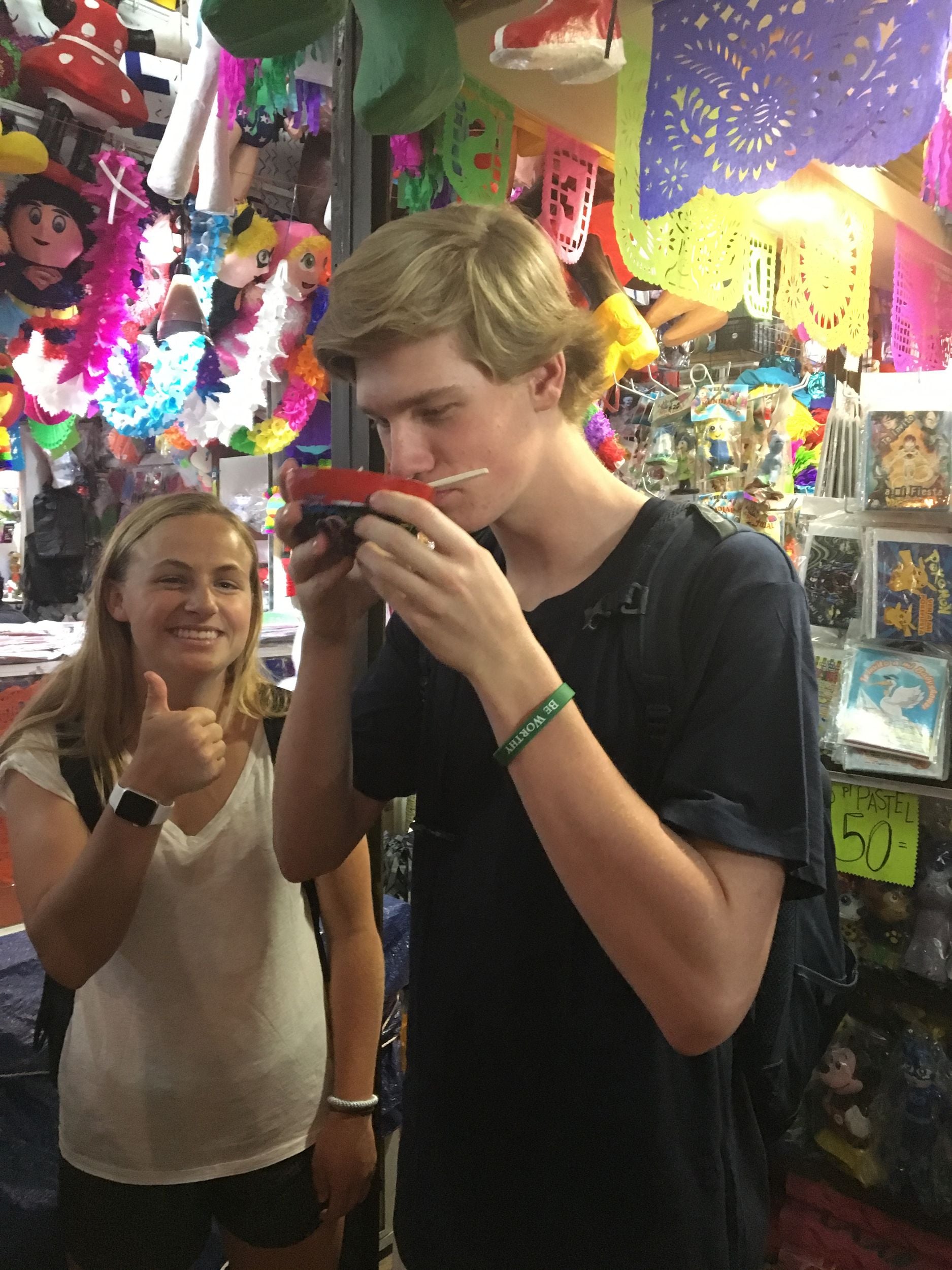 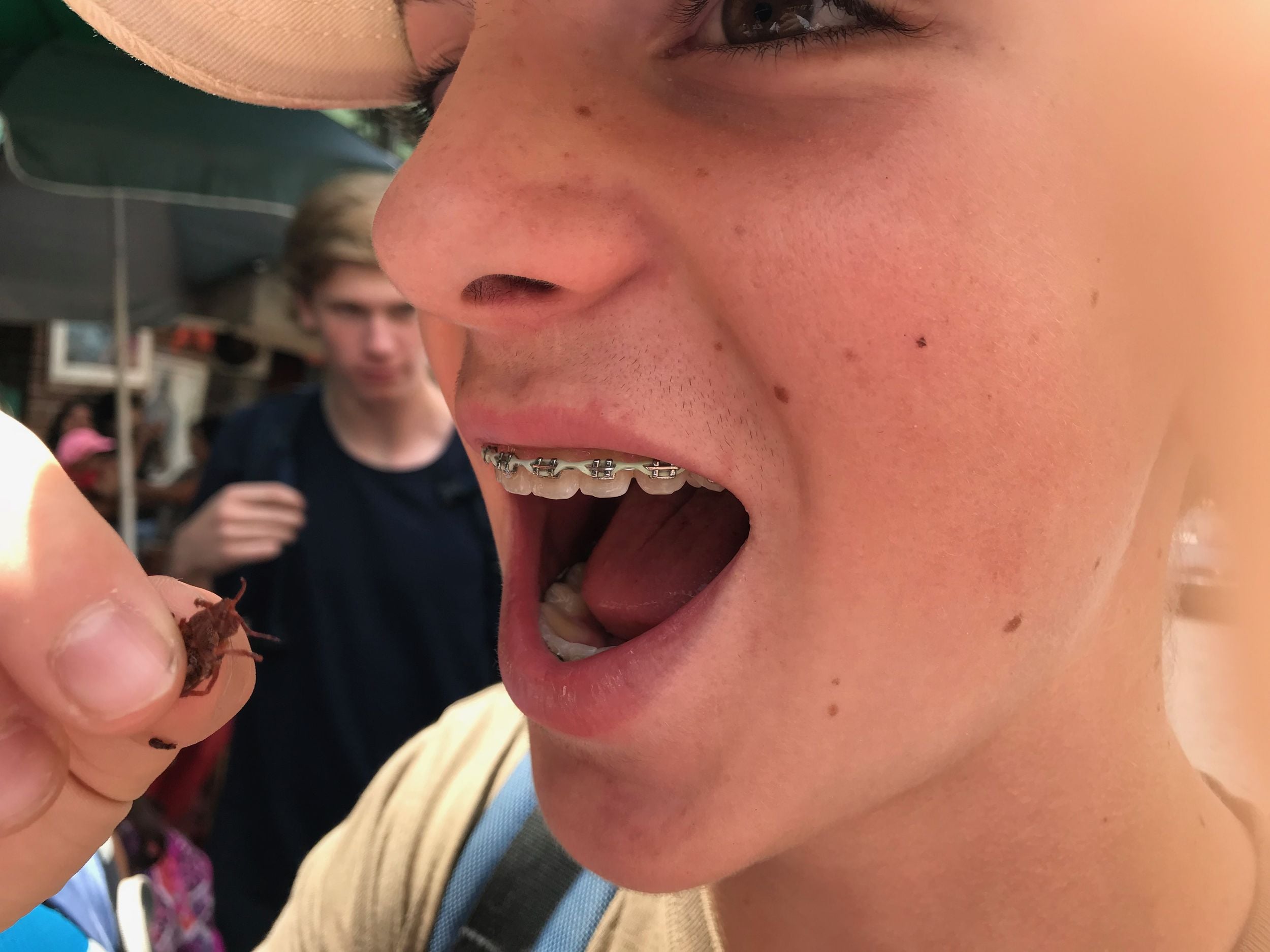