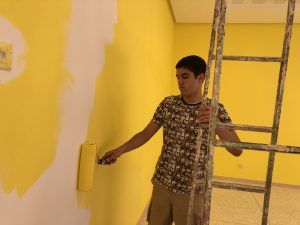 This summer, I received a generous grant from the Center for Service and Global Citizenship (CSGC) to contribute to my project of creating a playroom in the Oncology Department of the CHU Hospital in Marrakech, Morocco, for children suffering from cancer. Cancer awareness has been my focus since last summer, while I worked and volunteered in this hospital and conducted a workshop. Spending days in the Oncology Department, I realized that the children who were being treated mainly stayed in their rooms for hours on end, staring at the wall in boredom. The rooms in the pediatric department were cold and empty; children had no means of entertainment or an outlet for fun interaction with one another. I thought that a playroom in the hospital could have a life-changing impact for these sick children. I was honored to have the director of the hospital accept my proposal, and offer me the opportunity to set up a room.

Morocco is a beautiful country characterized by spectacular food, beautiful landscapes, and wonderful people. However, the healthcare system is a significant problem due to poverty and social inequality in public hospitals. Just by visiting the hospital, one can gain a general understanding of the underlying issues; people sit on the ground under the hot sun outside the hospital for hours, even days for some, awaiting care. Since the hospital is responsible for covering the entire southern region of Morocco, many of these patients travel from rural communities and stay outside overnight.

Upon my arrival in Marrakech, I immediately started my project by meeting with hospital officials and checking the room that I would be working in. As part of a new expansion of the hospital, this facility was still under construction. It was indeed in bad condition; there was dust, dirt, pieces of wood, and rocks all over the floor and the entrance, the windows were damaged, and the walls had cracks and indentures throughout. To work on solving these issues, I went to a local department store called Mr. Bricolage, where I met wonderful staff members who assisted me with selecting and acquiring all the materials accordingly. I was also delighted to meet the store manager, Stefane, who was very attentive and friendly as we chatted for a long time in French about my project; he was so moved by my ideas that he gave me a discount on my purchases. With his help, I was able to make educated selections on materials that would be important to accomplish my goals, such as paint and tools. It was rewarding to shop and chat with different staff who guided me and gave me tips on how to master my tasks.

My initial plan was to paint the walls of the room, but because of the poor conditions, I needed to overlay them with a layer of plaster to smoothen out the existing damage; I took the entire first day to complete this. The most difficult aspect of this task was ensuring that every intricate detail of the four walls were covered, and taking care to not let the layering touch outlets, light switches, and the windows, as well meeting my deadline. I moved around all day performing these multiphase processes. Soon enough, the walls turned from rough to smooth, and I was ready to paint.

Afterwards, I had chosen yellow as my designated color for the room, but I had never painted before. I spent the entire second day learning how to do so, and then painted all four walls in the room. Similar to the plastering job, the most challenging aspect of this task involved intricately covering every possible corner; it took a lot of work and patience to do it effectively, but by the end, I was proud of the final product; three beautifully coated walls in yellow, and one in white. I also brought in two homemade wooden benches that I designed, built by a woodworker, and painted them myself in burgundy.

Once this was done, I had to clean up the mess that came as a result. The floors remained incredibly dirty and the windows had to be fixed. I spent my third day of work progressing towards solving these issues. A clean floor took about an hour to accomplish, and replacement windows took their fair share of work to find in the correct dimensions and install with the help of workers from the hospital. Once the room was tidied up, I had to begin to focus on the furnishing and comforting. I placed the fixtures, such as small play tables and chairs, as well as a playmats, into the room. Also, Marrakech, currently experiencing weather that easily surpasses 100 degrees on a daily basis, can lead to even hotter rooms when there is a lack of air conditioning. After sweatily working in the room for several days, I decided to work with the hospital to install air conditioning promptly. I then placed play boxes that would be able to be filled with toys in various areas in the room. At this point, I was ready to begin turning it into a real playroom.

First, I had to buy toys and materials to establish a setting. I returned to Mr. Bricolage and was able to find more playroom mats, small tables and chairs, and other appliances. I also visited some local toy stores and bought a mini bowling set, a ring toss game, toy balls, and more. With toys came the need for a playful setting. I decorated the painted walls with decals I had previously bought in the United States which depicted characters from “Super Mario,” “Pokemon,” and “Frozen,” and also hung up paintings of animals and other child-friendly images that I purchased in Morocco. After several additional adjustments and additions, such as balloons and other colorful ornaments, the toys and decorations were complete. 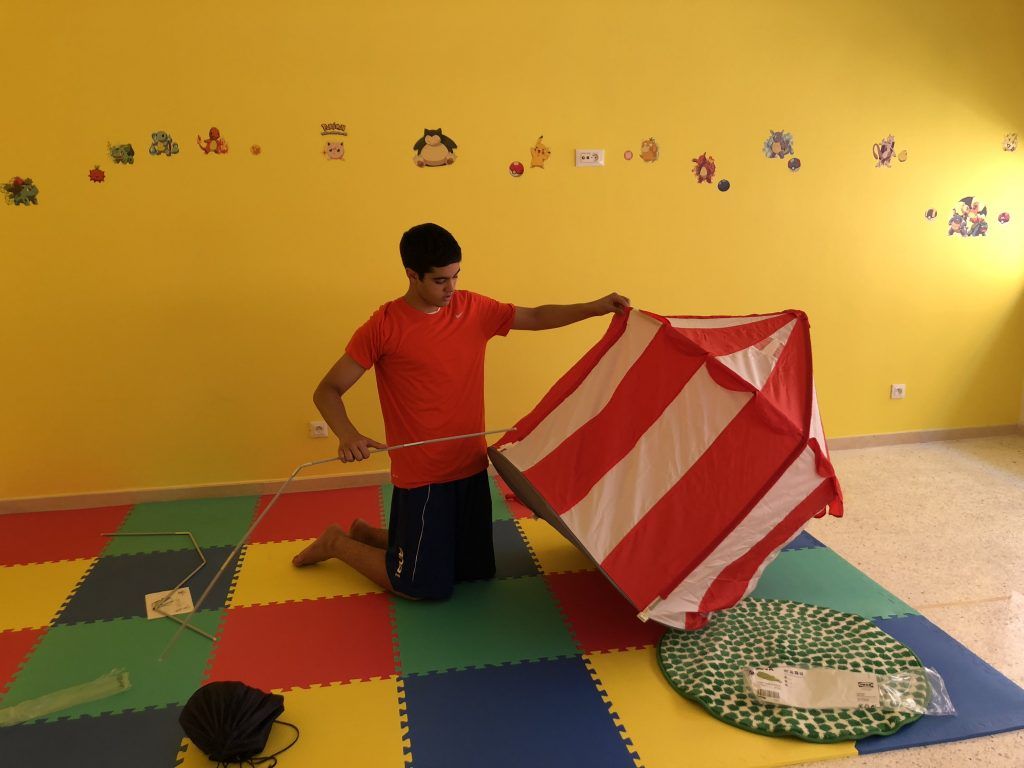 I am currently preparing for my inaugural party, the first day that children will be able to play in and enjoy the room, and a two-week, free, instructive program in the hospital for children undergoing treatment. I will describe the process of planning for this in my next blog post, as well as the event itself. Thus far, this project has proven incredibly enriching, not only for the children who will enjoy it, but for my personal knowledge of the struggles that Moroccan healthcare patients face on the daily. I am actively making it my personal goal to help these efforts, and am working hard to expand my horizons of understanding regarding the challenges facing the healthcare system in Morocco in the present day. I greatly look forward to the outcome of my project, as I dedicate a dream playroom for young patients to enjoy a place to come and have fun as a positive outlet in their days long after my departure.