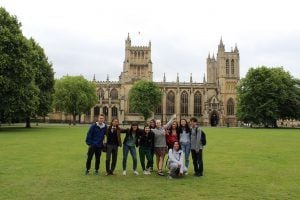 Traveling to Bristol brought with it a wave of different experiences and viewpoints which I have not experienced so far in the trip. From the Bansky’s to the 500 year old archway, Bristol was brimming with multiple different aspects of British society. We immersed ourselves in a very thorough manner by exploring old Bristol along with a thriving hippie neighborhood. As a result of these different cultural pools, my perception of the city has deepened in a multilayered way.

Getting off the train this morning after an extremely enjoyable ride, I took in a very first glimpse of the city. The cityscape was outlined by layers of old buildings with church steeples and apartment complexes. This surprised me because I had imagined an old historic British port with loads of history and a picturesque aesthetic. This preconceived notion was shattered during our street art tour given by a street artist himself. As Alex led us through the works of many renowned artists, the setting seemed to deteriorate. Soon we were squeezing through a narrow alley enveloped in graffiti and dominated by conflicting aromas. This displayed a new side of Bristol and Britain in general. 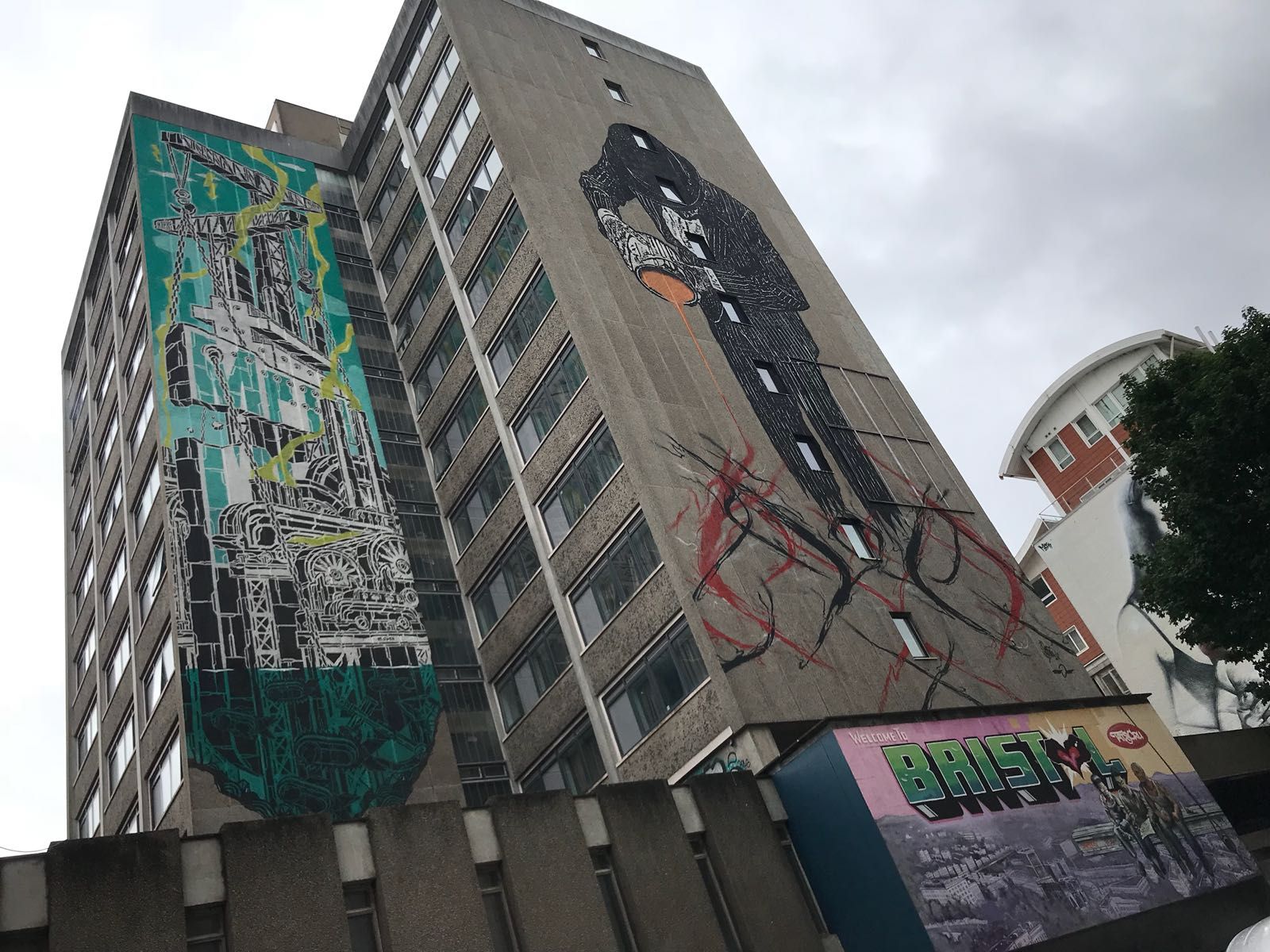 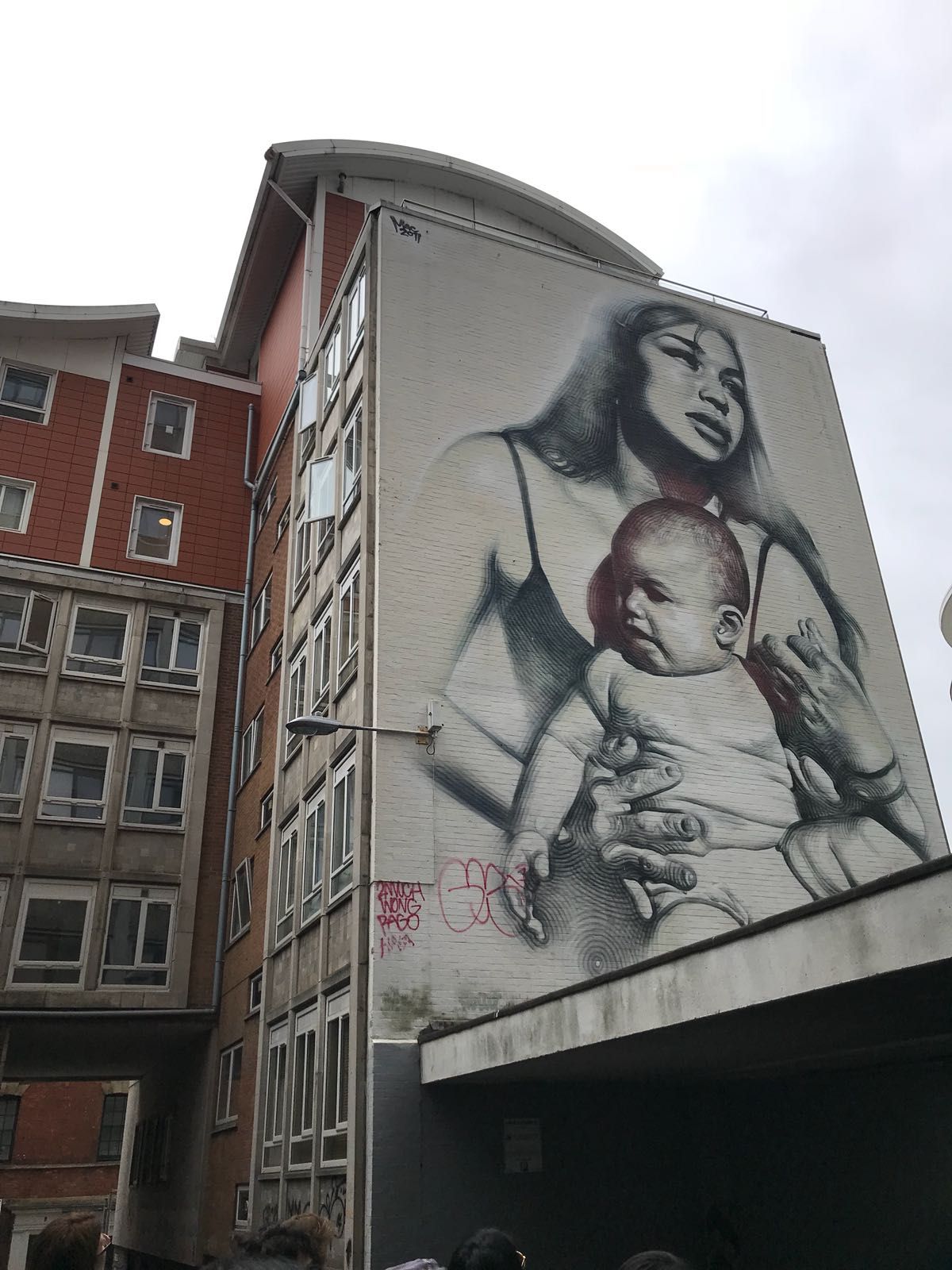 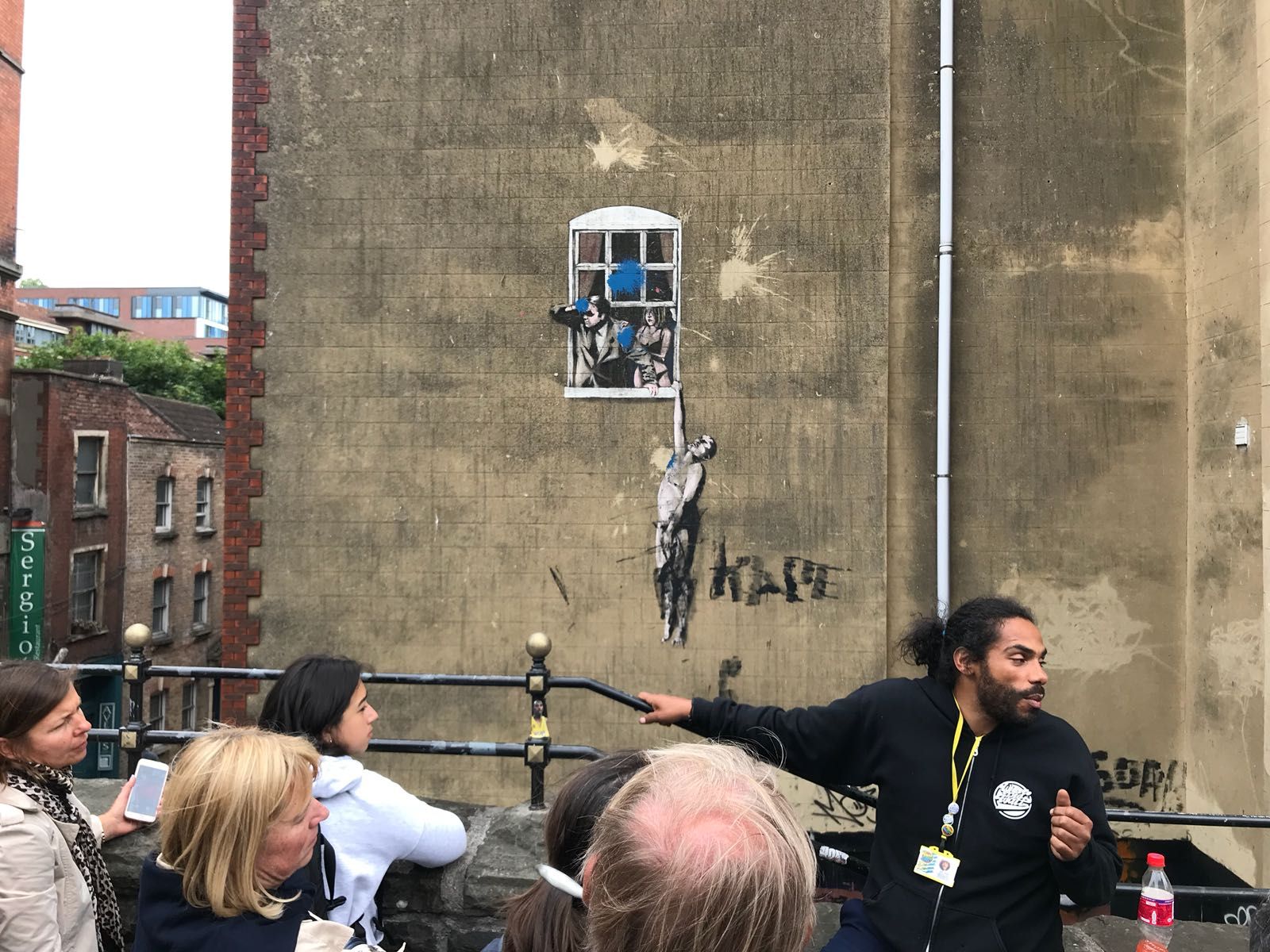 London so far has been picturesque and the landscape from the train was beautiful but now we were experiencing a poorly maintained neighborhood with boarded up windows and graffiti everywhere. While this was shocking, I think it was also important to fully understand and immerse ourselves in British society. Not all of it is picture perfect as portrayed. As that tour showed to us, homelessness, unemployment, and other societal problems affect the UK just like the US. Our tour guide also helped highlight the daily problems and issues of his profession. Not only was it mostly illegal and dangerous, but it is very challenging to make a living.

The other side to Bristol revealed itself in different ways throughout the rest of the day. Our walk through Spike Island along with the hours spent on the college green playing hacky sack were very enjoyable. John, our most recent tour guide showed us the ins and outs of the haunted section of Bristol. He took us through the old section of town and showed us 500 hundred-year-old arches and markets. This help to unveil the historical part of Bristol. We learned about Blackbeard’s pub along with the theater frequented by Paul McCartney. John’s in depth perspective shed new light on the city. I finally understood the hundreds of years that are woven into the city walls. I now see how the problems that Bristol has faced in the past just serve to strengthen culture. German bombings and bubonic plague are just pieces of the complex history of this special city. 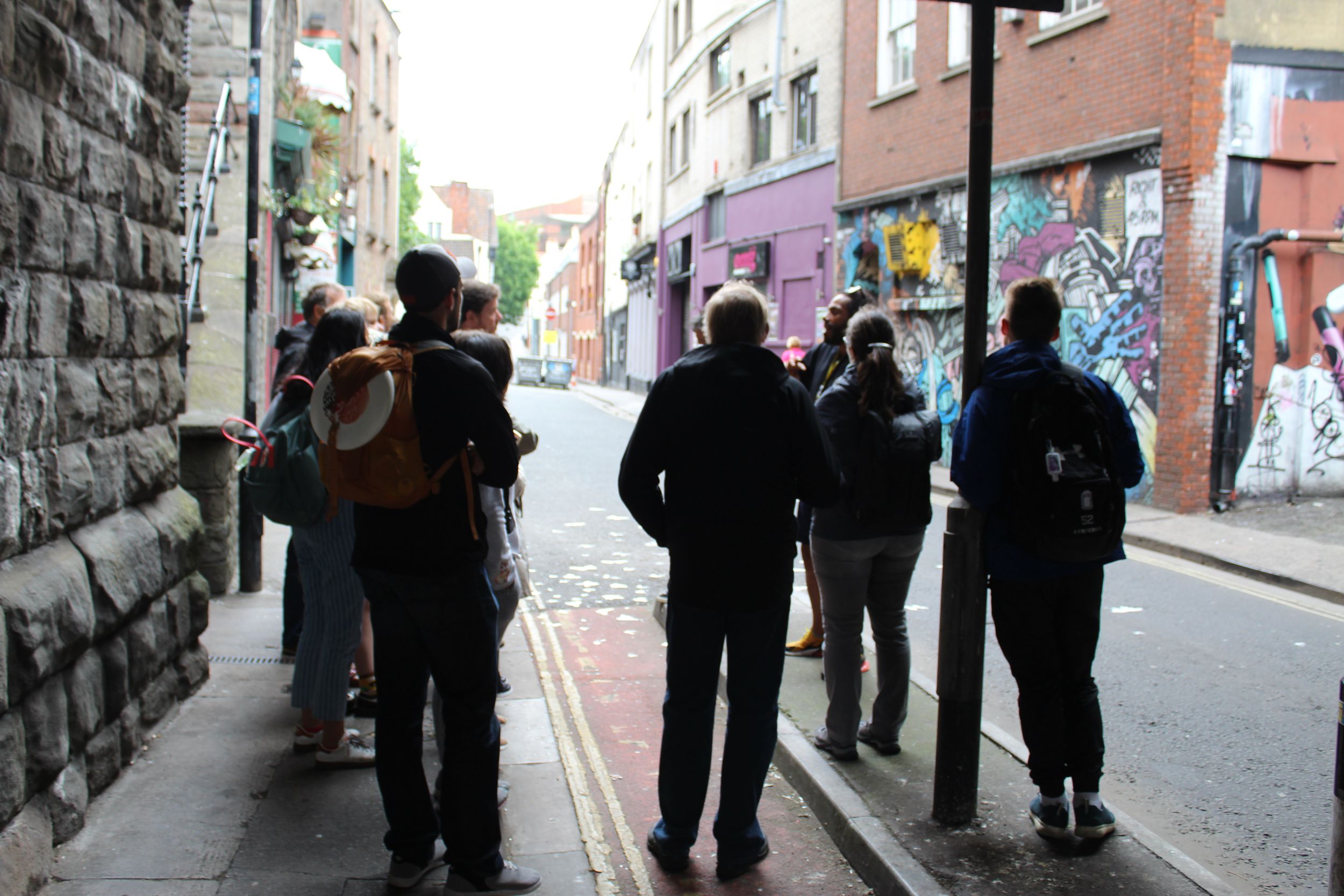 Ultimately, in just one day, I feel that I have come to a real understanding about a complicated city. While the hippie portion of town did make me uncomfortable and out of place, it did serve as a strong and necessary tool for me to see the other side of British society. I am happy to have experienced the uncomfortableness rather than remain ignorant to a prevalent piece of culture. Also, the haunted tour of the old city was interesting because we saw so many unique shops and landmarks which all have unique backgrounds and stories.

It was a great end to a great week and I am incredibly excited to see what next week offers. 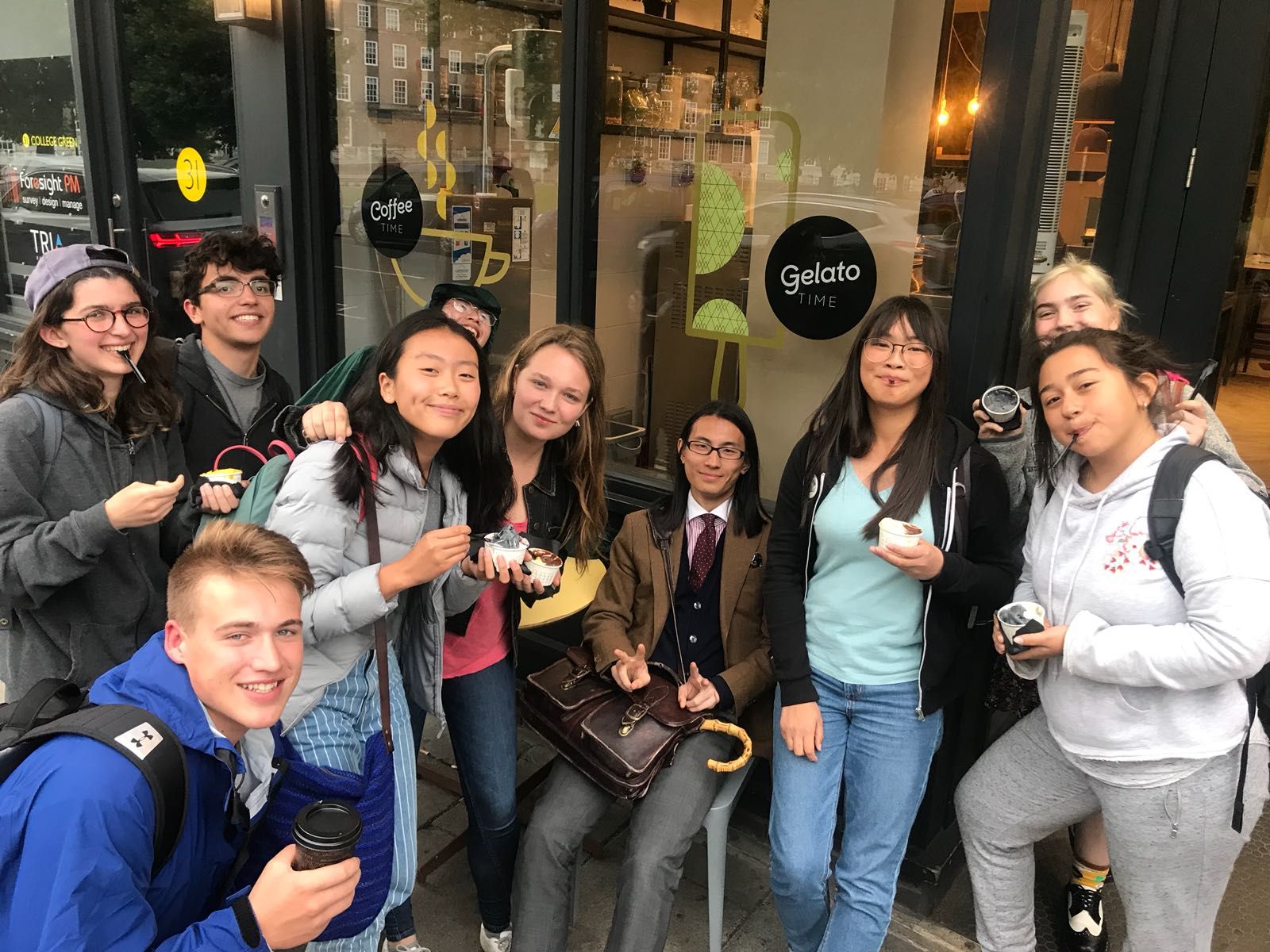 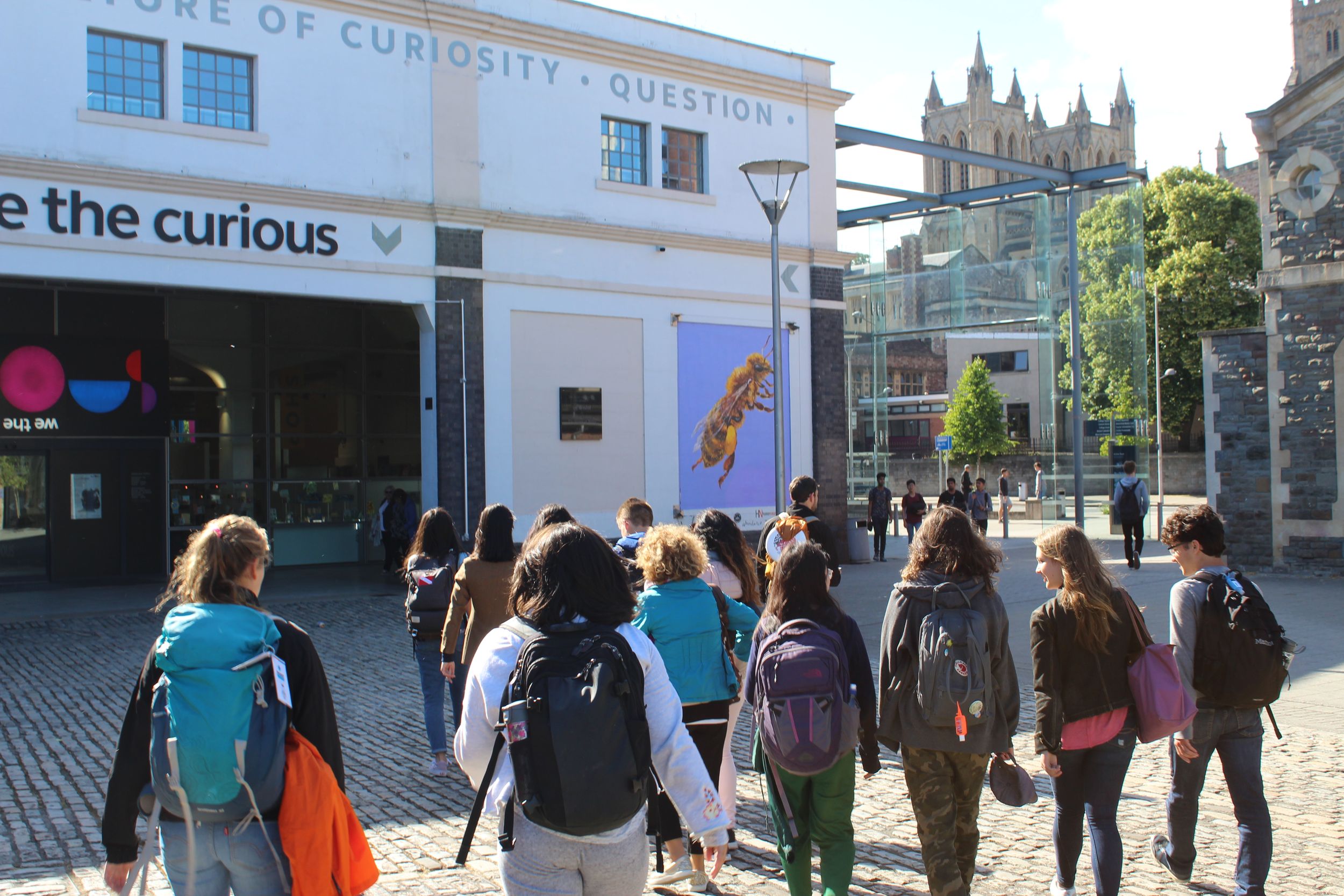