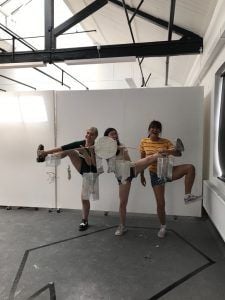 Today began (as it always has) with a groggy wake-up and breakfast at Crescent Cafe, then continued on to an in-depth discussion about art. We talked about what art/drawing meant to us, and what it should be. There was the broad themed-answer, that art should be expressive and can come in many different forms, but we also talked about other themes. One point that we brought up was about how art should be open to everyone, and that artwork should connect with an individual, not be contained within a group. We also talked about the social justice aspect of art and how art should open up ideas in people’s minds and give them inspiration, not narrow their perspective.

After that, we did a drawing exercise led by Anna and Susan. We separated into two circles, one inner ring and one outer ring, and partnered up. Each partnership received a piece of paper that had something relating to the trip on it, like yesterday’s slideshow of artists and their works, hacky-sack, or Mrs. Bicknell. It was like a high-pressure game of Pictionary; one person had a minute to draw something and the other person would have to guess it. It was actually pretty easy, since we already had experience speed-drawing (or more like scribbling) on the boat back to London from Richmond.

At Central St. Martin’s, we started our day-long project, which was to create a ‘wearable sculpture’ with miscellaneous materials, such as chicken wire, plaster bandages, and newspaper, and use the skills we had learned in the past few days, like using India Ink. Overall, it was an interesting experience. I partnered up with Lucy and Susan, and as everybody followed through with their blueprints and began their tasks, we shuffled through five different ideas for our sculpture, beginning with a metal tube that fit over your arm and ending with something resembling a wearable mobile with caged hands. We spent the entire day (that is, approximately five hours) gathering materials, making a mold out of Susan’s hand, putting things together, admiring our work, watching our futile efforts crumble before our eyes, and fixing it. Despite all this, I’m proud to say that our sculpture is currently drying in the studio (I hope) and everybody else’s sculptures turned out to be the stuff of legends. 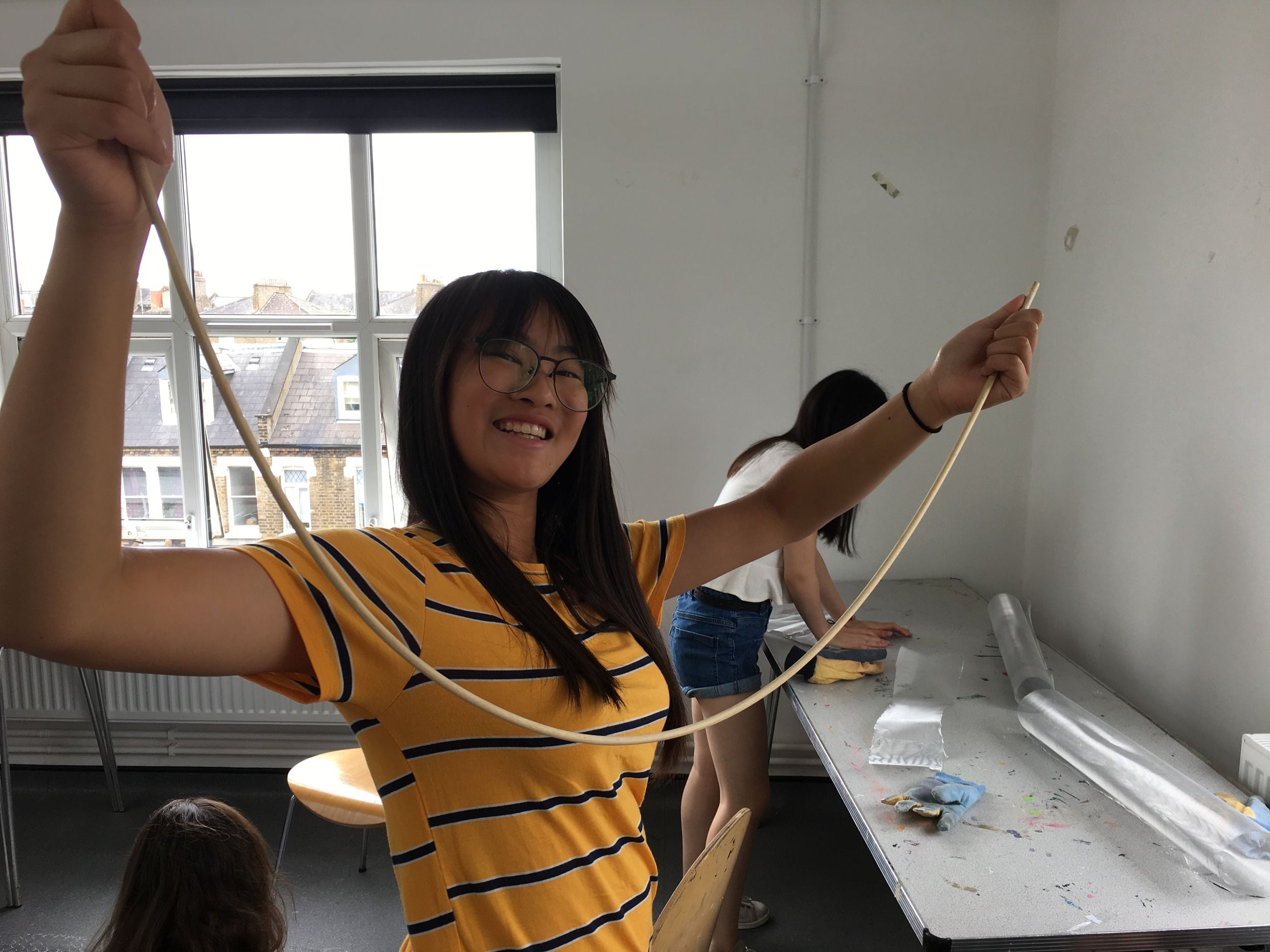 Jack and Cynthia made one that could only be worn by two people (which could potentially trap them and force them to be best friends forever), Natasha and Max made a headpiece that was a little taller than half of Max’s height, and Anna, Henry, and Maddie made a tall, snaking sculpture that ended in a loop and had a mold of Henry’s face suspended in the middle. One of the definite highlights from this experience was watching Anna and Maddie put wet plaster bandages all over Henry’s face, but a close second was when Max and Natasha took their piece out onto the street to get it photographed. Watching the scene from three stories high, it looked like an amateur photoshoot of a bold designer piece. 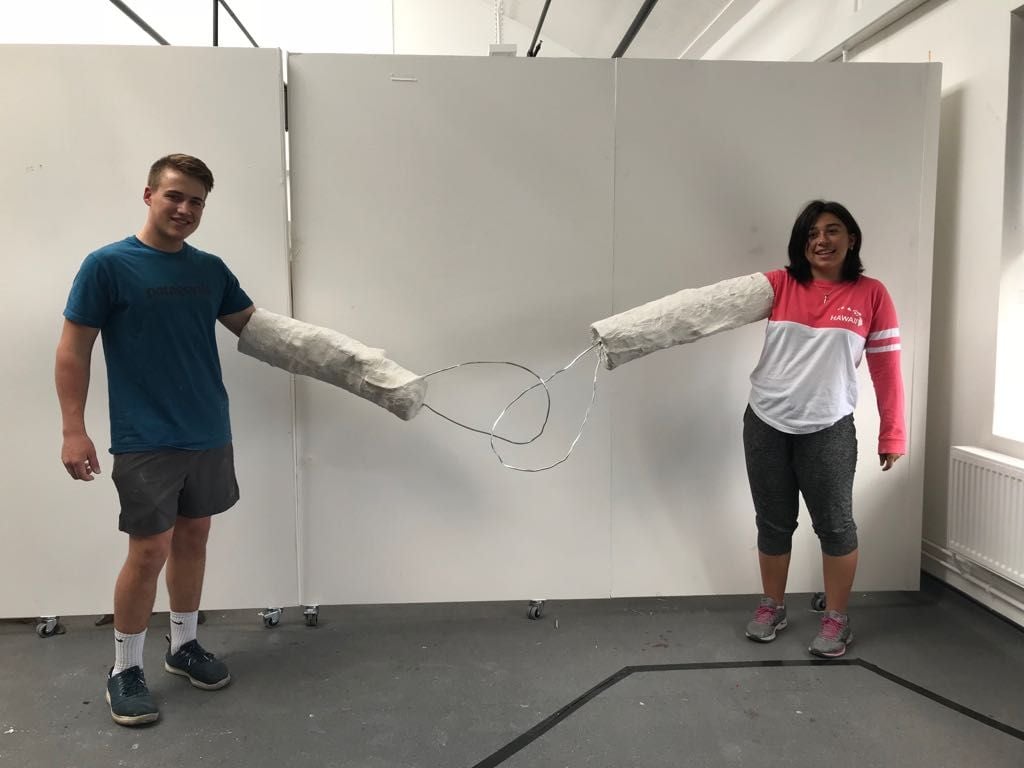 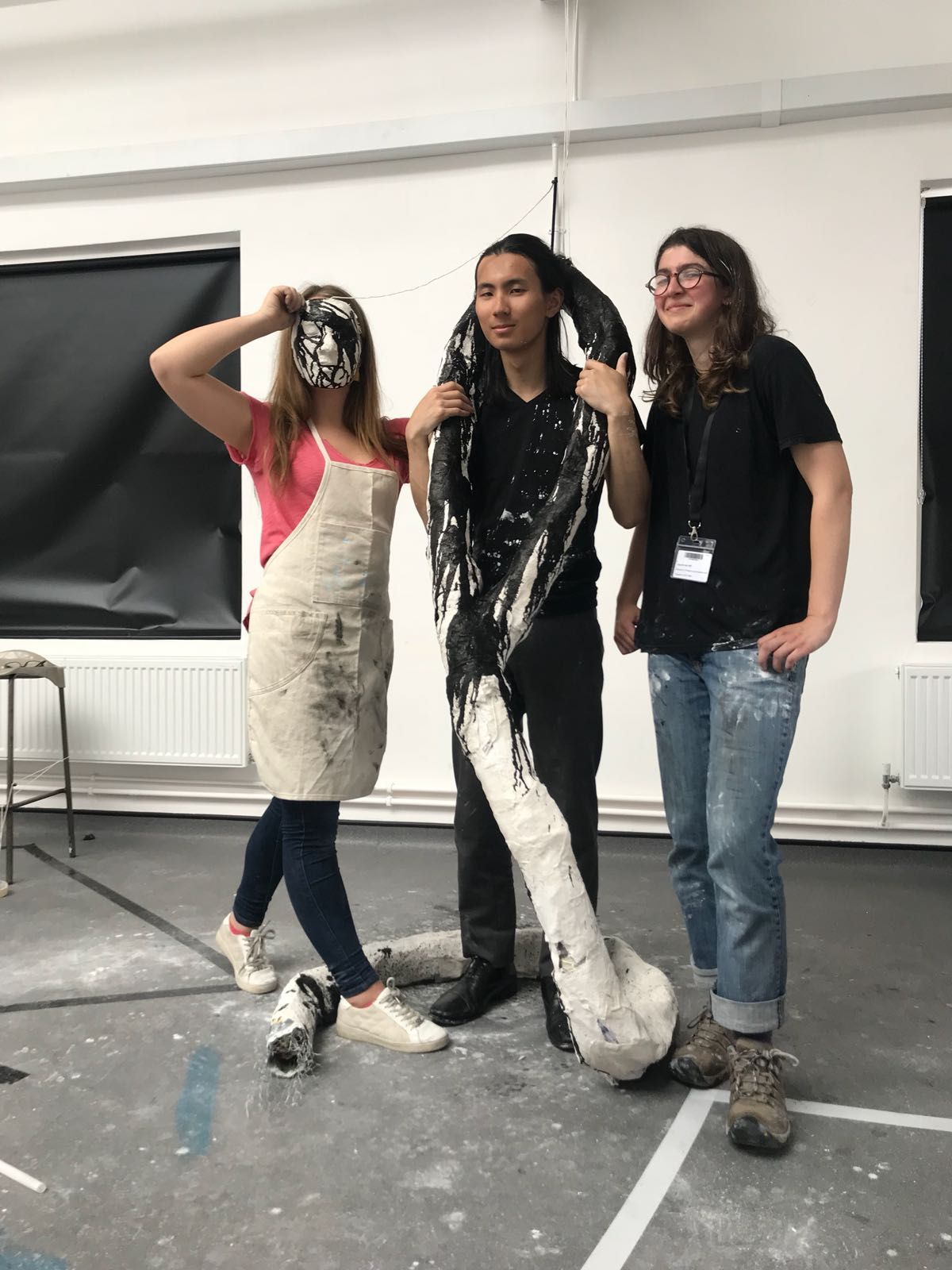 After we left Central St. Martin’s, we were excited to hear that we were going for a classic English afternoon cream tea! Although the idea of going for some English tea was absolutely mouthwatering, we soon found out that the hot tea only added to the heat of the late afternoon sun. We still got to try a bunch of new teas, such as white tea and vanilla chai, and even if it was too hot, the scones were amazing! We also learned a few very classic tea-drinking tips from Anna and Henry, like how you aren’t actually supposed to stir in a circular pattern, but instead, you’re supposed to move your spoon back and forth so that you don’t make any clinking noises.

Another pleasant surprise came when we returned to the Hurdwick. Our trip leaders told us that we had the freedom to split up for dinner (as long as we were back by eight)! We all had a pretty tiring day with our sculptures, so some of the girls decided to order out and relax in the room. Seeing as we only had a few days left in London, Cynthia and I decided to go out for dinner with Henry, Max, and Jack at a Chinese restaurant on the canal (and quite literally on the canal). However, it was a ten minute walk away from the hotel, and before we knew it, it was only a few minutes to eight. The rest of it was a bit of a mess. We ran a few blocks to get to the hotel, but stopped after a few minutes because I was falling behind (and it was really a bad idea to sprint a couple of hundred meters after dinner anyways), then Jack ran ahead to the supermarket near the hotel because he was out of apples, and we finally met at the entrance to the hotel, only to find out that our trip leaders were coming back from their dinner a few minutes later, so all that running wasn’t that important to our punctuality.

All in all, today was a surprisingly fun day. Initially, I was a little cautious about starting the classes, because we wouldn’t have the freedom of walking around London and seeing all the abstract, gorgeous, thought-provoking art. I still wish we had as much time as we did last week, but I’m thankful for the opportunities we have to work with different mediums (especially in sculpting, because we don’t have the chance to do that as much at Deerfield). I’m sad to be leaving in a few days, but I’m looking forward to the independent project we get to start tomorrow and whatever movie we’re going to watch tonight!

Quotes from today:
“Hey, this looks pretty good!” *everything proceeds to fall apart*
“I mean, it can’t get any worse.” *things proceed to get worse*
“I put plaster all over my shirt for the photoshoot to make it look like I worked really hard. Oh, the plaster on my shorts? That stuff was already there.”
“No, you’re supposed to do it like this!” *stirs teaspoon in a really complex pattern*
“Oh shoot, it’s already 7:56.”
“Hey, are you done with the blog?” 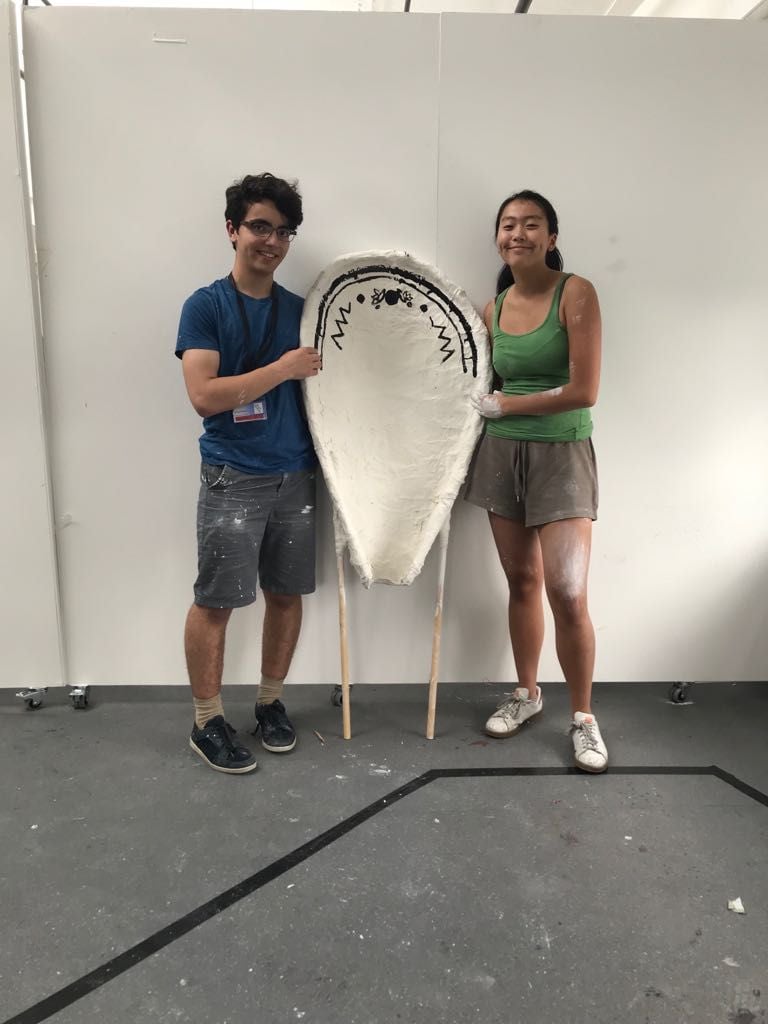 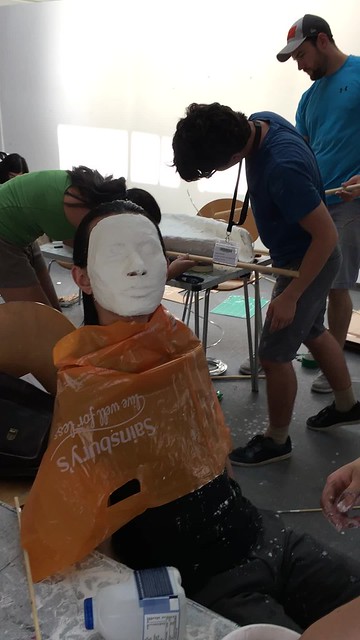 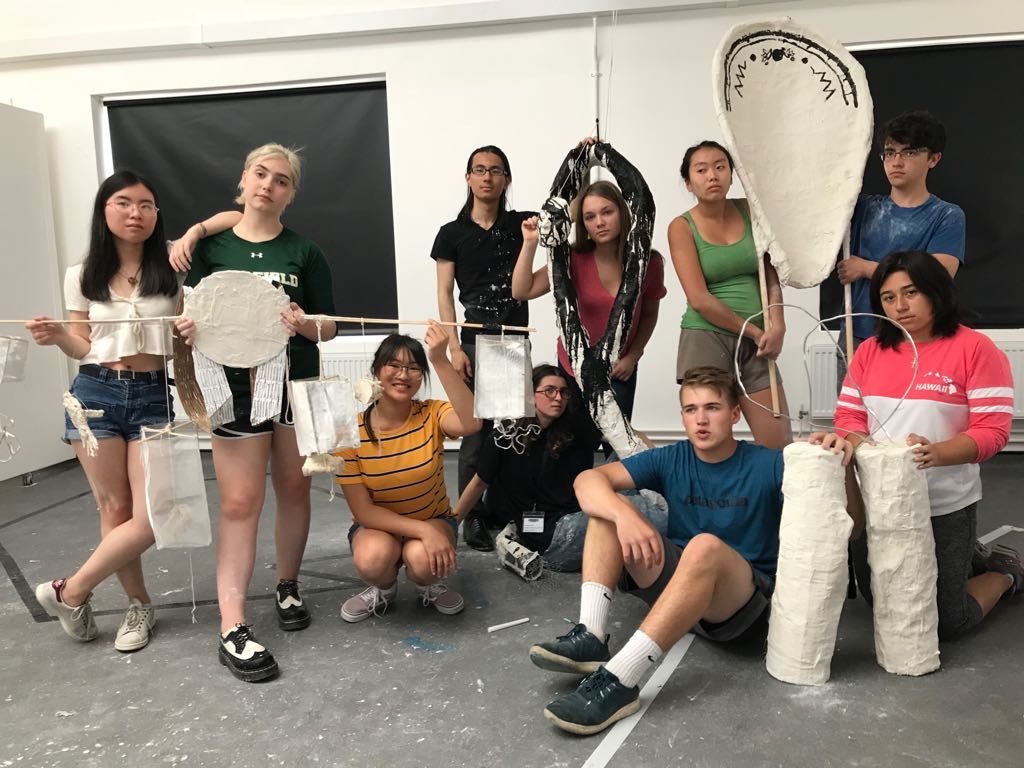