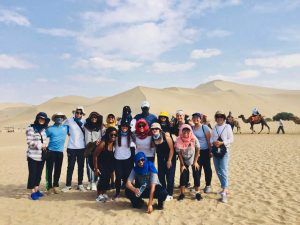 At 4:00 am sharp, our phones and alarms went off in a cacophony of bells and chimes, signaling our early wake-up call for our flight to Xi’an, followed by one to Dunhuang, home to the Gobi Desert. Forty minutes later, we blearily stumbled through the cool morning air to our tour bus and set off for the airport. Through the windows, we watched as the moon shrunk into the glowing morning light and the sun rose in a halo of pink and orange. 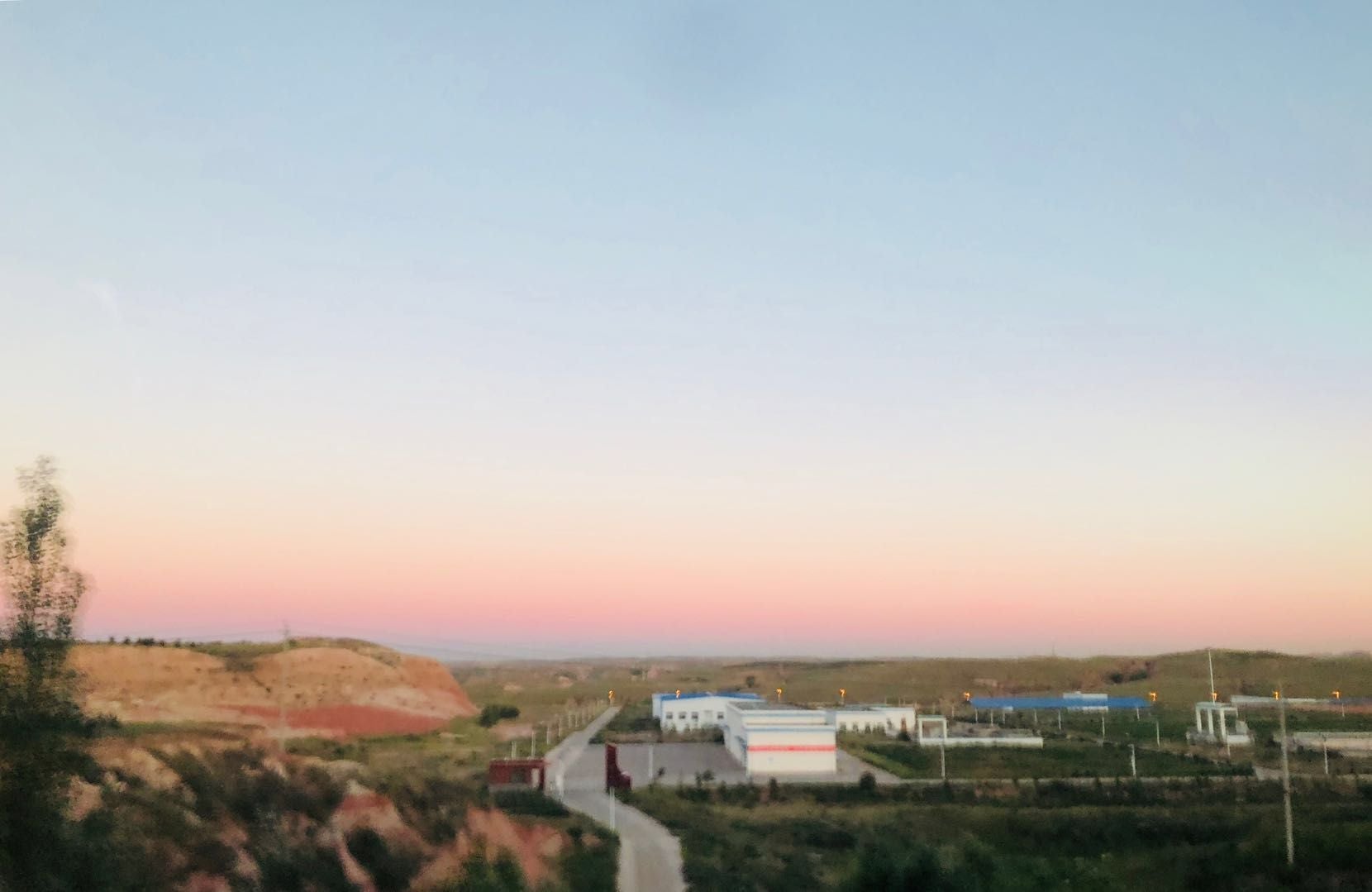 Following a 12 hour whirlwind of flights and layovers, we finally reached Dunhuang, and were greeted by our tour guide for the next three days. On the bus to the hotel, our guide briefed us on our upcoming itinerary and some history behind the city. She told us that she was born and raised in Dunhuang, and therefore takes immense pride in both the sites and people. She noted that the people of Dunhuang are considered to be familial and honest, and tend to lead quiet lives due to the absence of large corporations or businesses, save tourist attractions. She pointed out the apricot trees littering the sides of highway, and explained that though apricots are some of the area’s largest sources of revenue, because the area is currently in a drought, the price has sky rocketed to around 100 RMB per fruit. She later revealed that the so-called “rainy season” supplies very little rain, as the average is 39mm per year.

Accompanying the apricot trees, streetlamp lined the roadsides, each with an apsara (a Hindu celestial singer and dancer for the Gods) stationed at the top, holding the lamp. Last trimester, I researched apsaras for Ms. Friends’ Asia in World History Class, so I was glad for the background knowledge.

After a 30 minute rest period, we headed to the main portion of our day—camel riding and sledding on the surrounding sand dunes. As we approached the site, our anticipation grew as the towering golden dunes came into view. However, before our journey officially began, Kelly and Feng Laoshi mentioned that on previous trips, students had enjoyed buying colorful silk scarves to protect their heads from the wind, sun, and sand, and perhaps we might enjoy doing the same. Not ten minutes later, all of us had purchased a scarf and the Laoshis were helping us secure them for our impending trek.

When we reached the gate, we spotted rows upon rows of camels resting in the hot sand, all awaiting the order to bring us to the top of the looming dunes. Upon spotting them, I found myself conflicted with feelings of both sympathy and excitement as I spotted a few of the animals looking absolutely exhausted, some having rejected the standard sitting pose in favor of completely collapsing onto the sand. Nevertheless, the ones we were lead upon looked quite lively and just as eager to get up and moving as we were. We were split into groups of five, which meant that after much confusion, Kelly Laoshi and I were separated from the group and placed with another family. This did not prove to be an issue until some time later, and the two of us happily spent the time chatting about the trip and her previous experiences in the desert with past student and faculty groups. 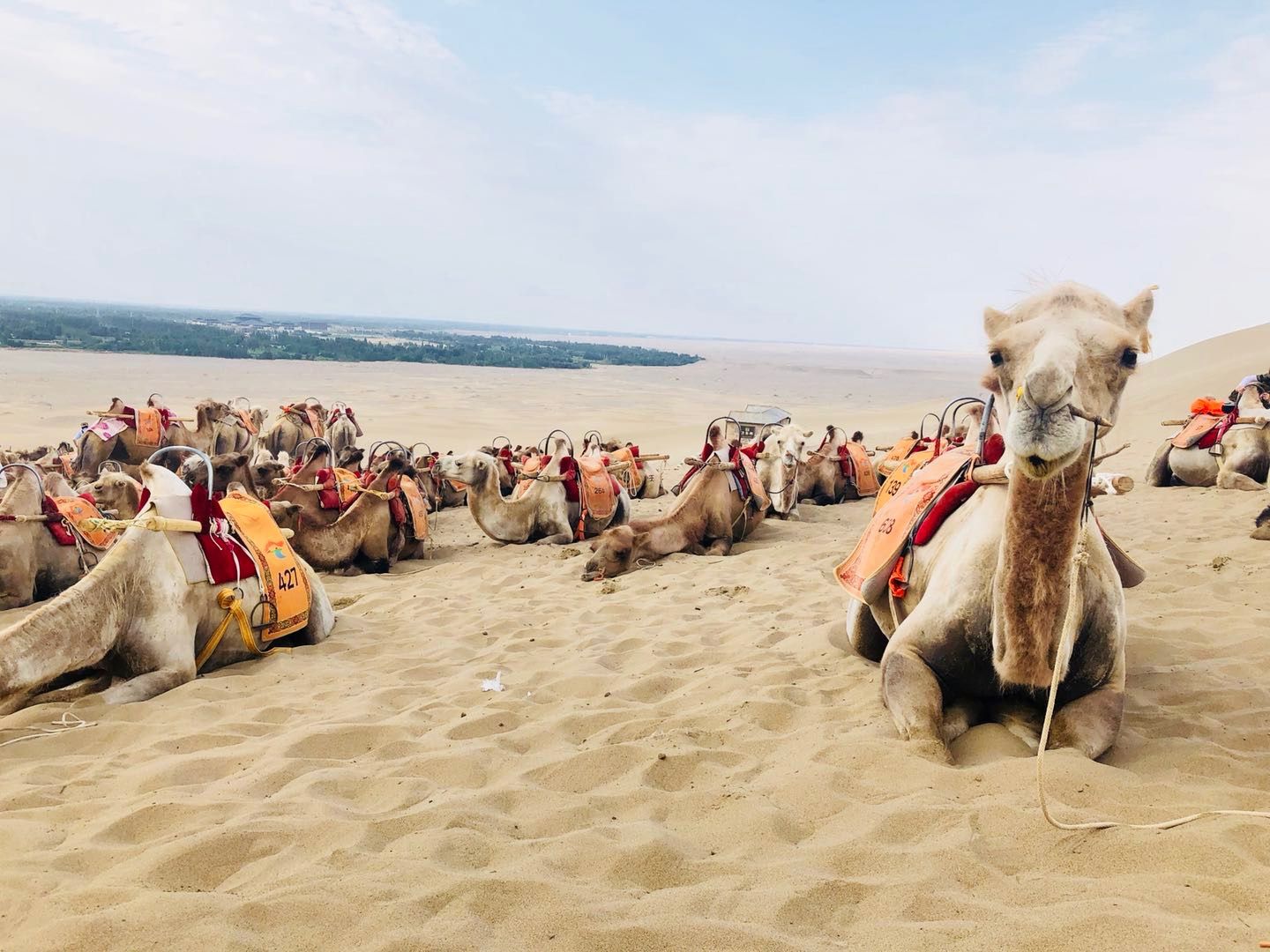 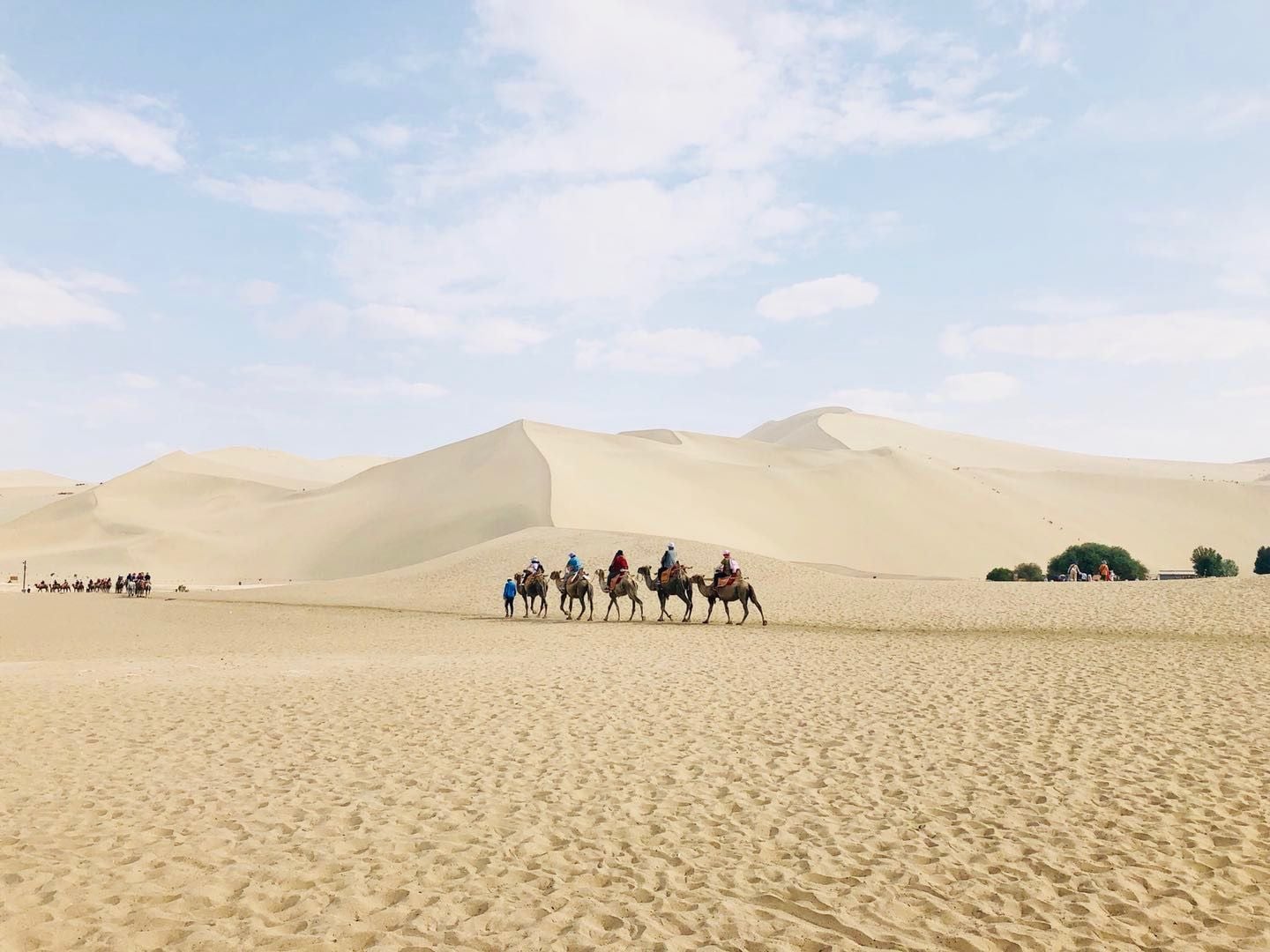 The steady rocking of the camel beneath me coupled with the view of rolling dunes—almost too picturesque to be real—made for a relaxing yet breathtaking experience. The dunes, sprinkled with an occasional trail of footprints, towered over us, as the faint pink-tinted shadow of mountains beneath clouded blue sky served as our backdrop. Every so often, we would pass a speaker blaring an odd mixture of soothing traditional Chinese music and intrusive safety announcements. Thirty minutes later, we found ourselves at the top of the dunes, face to face with an alarmingly vertical-looking set of wooden steps. As it turned out, the steps lead us to the top of the sledding dune. After hastily informing Kelly Laoshi that all of us would most definitely be sledding, we clambered up the steps, which came to resemble something akin to sandboxes the closer we drew to the top. From the top of the hill, we surveyed the area below, and found Kelly Laoshi and our traveling companions to be mere dots on the bright sand. 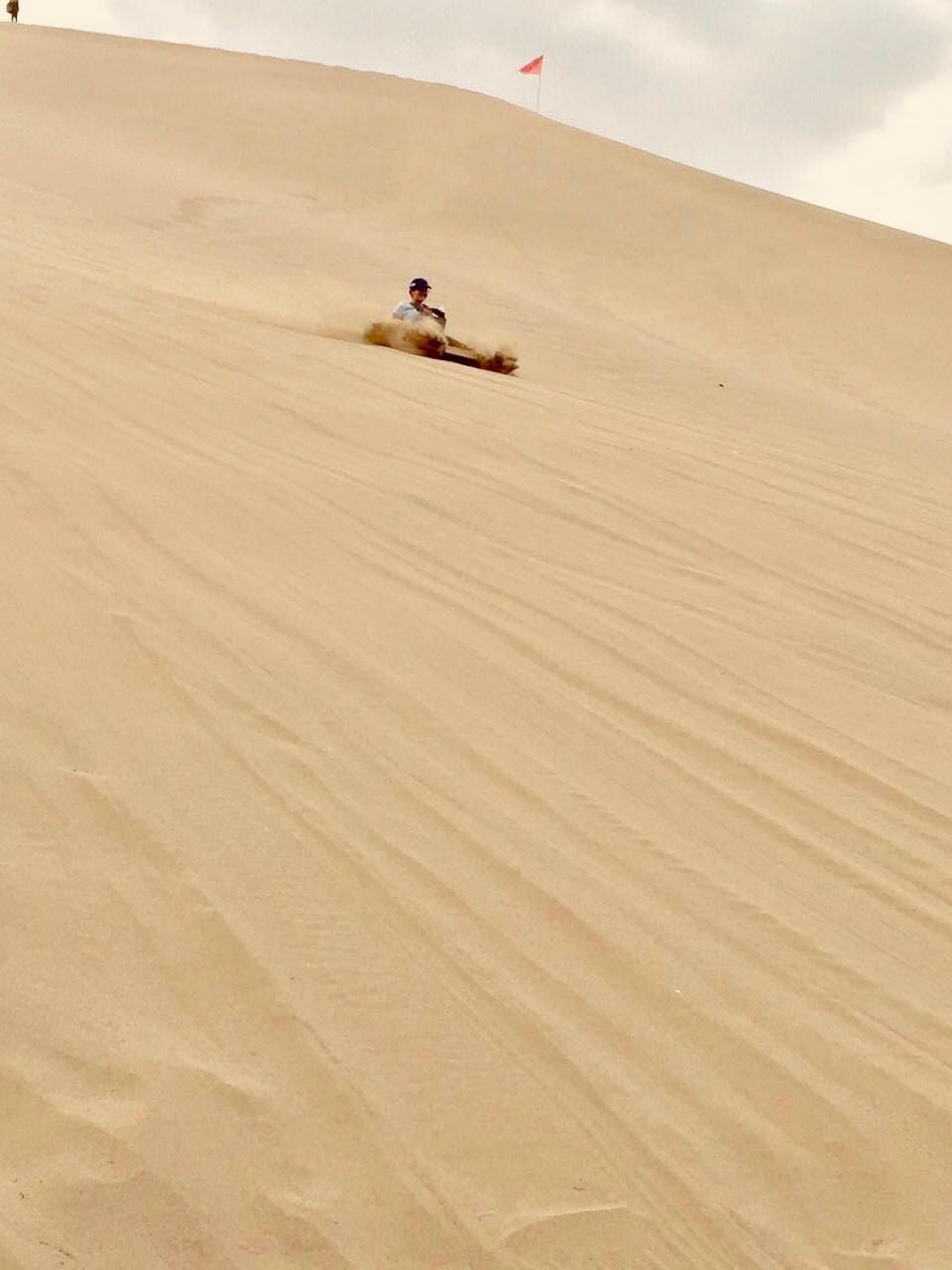 One by one, we clumsily settled into the shallow wooden vessels that would serve as our sleds, and after a brief safety talk, plummeted towards the bottom of the hill, conjuring sand clouds as large as our bodies behind us, using only our hands and feet as brakes. We all made it down safely (some of us more covered in sand than others), and unanimously agreed that yes, this was much better than any roller coaster or amusement park ride. Too soon, it was time to head back. For most of us.

Unfortunately, due to our traveling with a family as opposed a Deerfield group, Kelly Laoshi and I found ourselves perched at the top of the mountain for another hour after our companions had already left, anxiously waiting for the family we had climbed the mountain with, who had mysterious disappeared. At one point, we began to plot the possibility of stealing our own camels and charging down the mountain in a triumphant return, but quickly dropped the idea for a multitude of reasons, the foremost concerning the legality of commandeering a camel. Eventually, the family was found, and after another 30 minutes, we were reunited with the group and made our way to dinner at a local restaurant.

The dinner was delicious, and the Laoshis ordered us some of their favorite dishes, all of which we happily sampled. We then returned the hotel to finally rest after our whirlwind day, and all called it an early night due to our early wake-up. More desert adventures to come tomorrow! 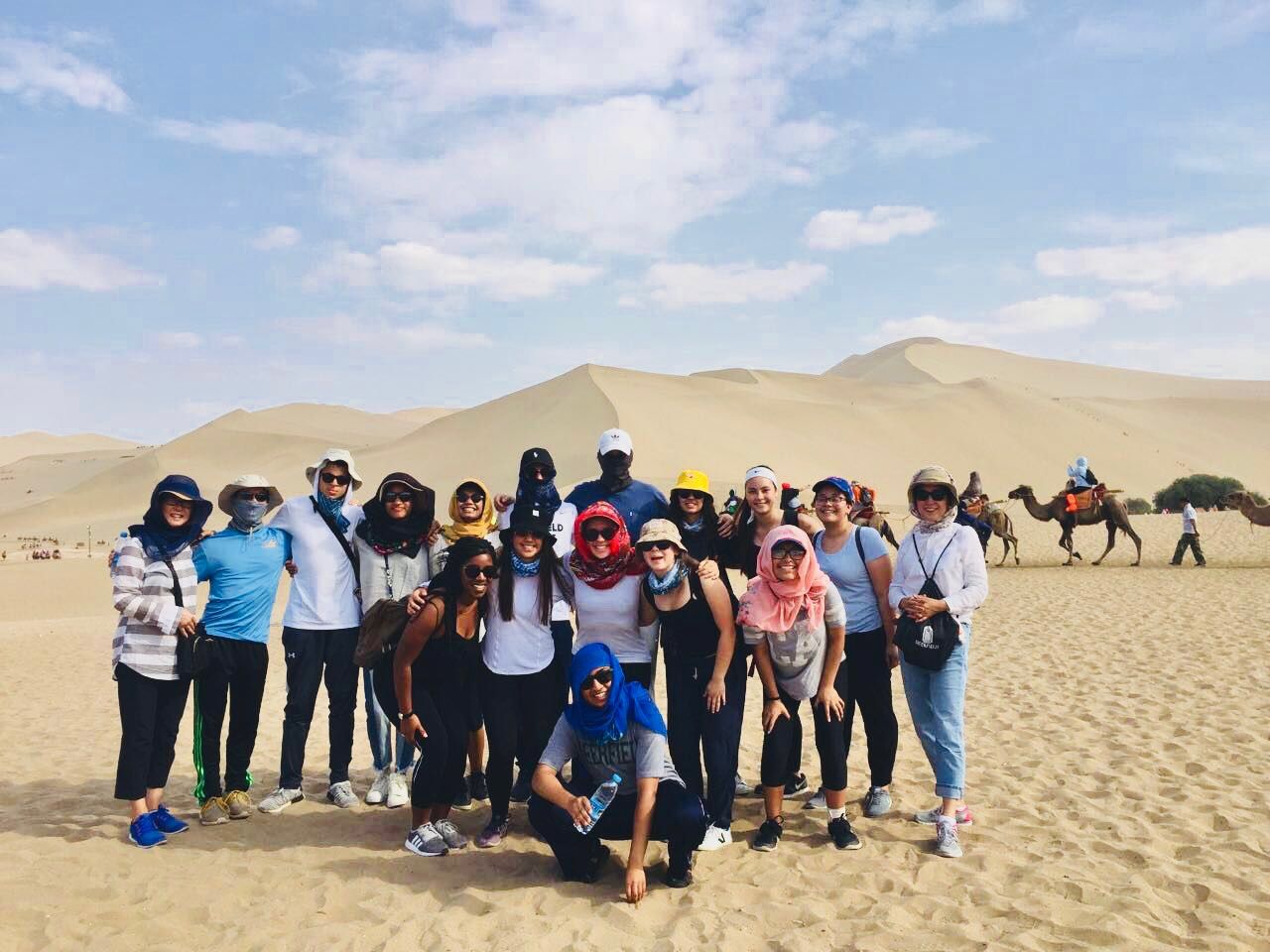