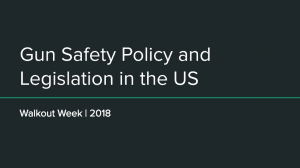 Walkout week has officially begun and I just wanted to thank everyone who’s been involved so far. There are over 2000 schools participating in the National School Walkout across America, and it is all due to the amazing work of the students.

A few quick things: anyone who attended a gun control info session received a blue wristband. Feel free to start up a conversation about guns/gun policy with anyone wearing one of those!

Next, although the National School Walkout demonstration is primarily for those who would like to protest congressional inaction on gun reform and support gun safety legislation, we hope that the rest of this week provides an avenue to dialogue across the aisles.

The informational sessions were used to educate students on the current issues and legislation concerning gun violence in America. Those slides are now posted below. The conversation cards on the Dining Hall tables are meant to spur productive conversation, and the open dialogue (hosted by the Young Republicans and Young Democrats) on Sunday is a way to learn from a variety of views on this topic. You may not want to demonstrate on April 20th, but please do participate in the ongoing conversation.

Our take action event after classes on Friday is intended to teach students how to contact their representatives and how to register to vote. You may choose to voice your support for gun safety legislation or you may not. Either way, I hope that everyone feels empowered to voice their opinion and protest for what they believe is right.