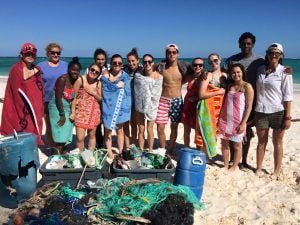 Morgane Dackiw (’19) and Ali Fujiyoshi (’19) share a mantra inspired by the lessons they learned today at the mangroves, doing a plastics cleanup, and dissecting lion fish. 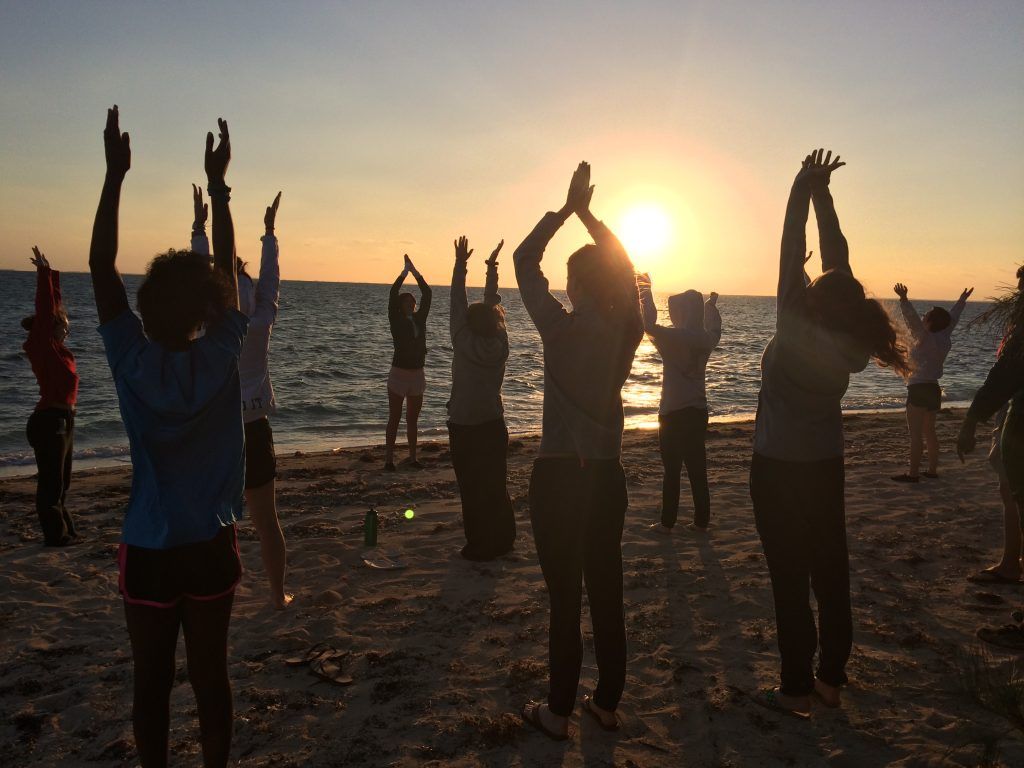 Like Tuesday, it was too windy for us to jump off of High Rock this morning, and so we had an invigorating yoga session on the beach with the sunrise. After breakfast, we took a short van ride to a mangrove estuary at Page Creek where we were taught how to identify the four different types of mangroves; red, black, white, and button. We learned that Mangroves offer a multitude of purposes in helping its surrounding ecosystem. They protect the shore from natural disasters, they provide habitats for fish nurseries, they filter nutrients, and some secrete salts back out through their leaves, making them salty to the taste. Also stemming with the salty leaves are “propagules,” which are mangrove seedlings that fall off and can float up to 90 days in water until they plant their roots. To add to their amazing features, mangroves can thrive in “brackish” waters- salt and fresh water! We wanted to get up close and personal with the protective mangrove root system, so we snorkeled down a creek of mangroves and observed many species of fish taking shelter in them, such as Schoolmaster snappers, yellow tail snappers, damsel fish, juvenile barracudas, and puffer fish.

A world-wide problem that has developed from the poor management of plastic production and disposal is also a prominent presence in the Bahamas, and we were able to see this on the shores of Cotton Bay on Eleuthera. 300 million tons of plastic are produced yearly on the planet, primarily made of fossil fuels like oil. This means that it can never fully degrade, as only 1/3 of plastics are being recycled and repurposed globally. One may ask, “Where does the other 2/3 of the plastic go?” It either gets put into landfills where it is then either thrown into the oceans or – at least in the Caribbean – burnt in large piles that pollute the air enormously. Marine life is most affected by the plastic debris as 100,000 marine animals are impacted by it in The Bahamas and the likelihood of disease and infection in coral reefs can increase from 4% to 89% due to the abrasions and cuts that they suffer from plastic. The struggle of an island nation in disposing plastic is that it is very expensive to ship it to the United States, and throwing it into the ocean is very detrimental to marine life. Therefore, you may also ask: “Why does Eleuthera not build a recycling plant?” We had the opportunity to speak to one of the experts at Cape Eleuthera Institute who answered that exact question for us. He explained to us that the amount of plastic on Eleuthera would not outweigh the cost of the recycling plant. The Institute has crafted a system of recycling to be able to put use to all kinds of resources. With all of this information in mind, we attacked the pink sand with vigor as we picked through the seaweed to collect plastic. 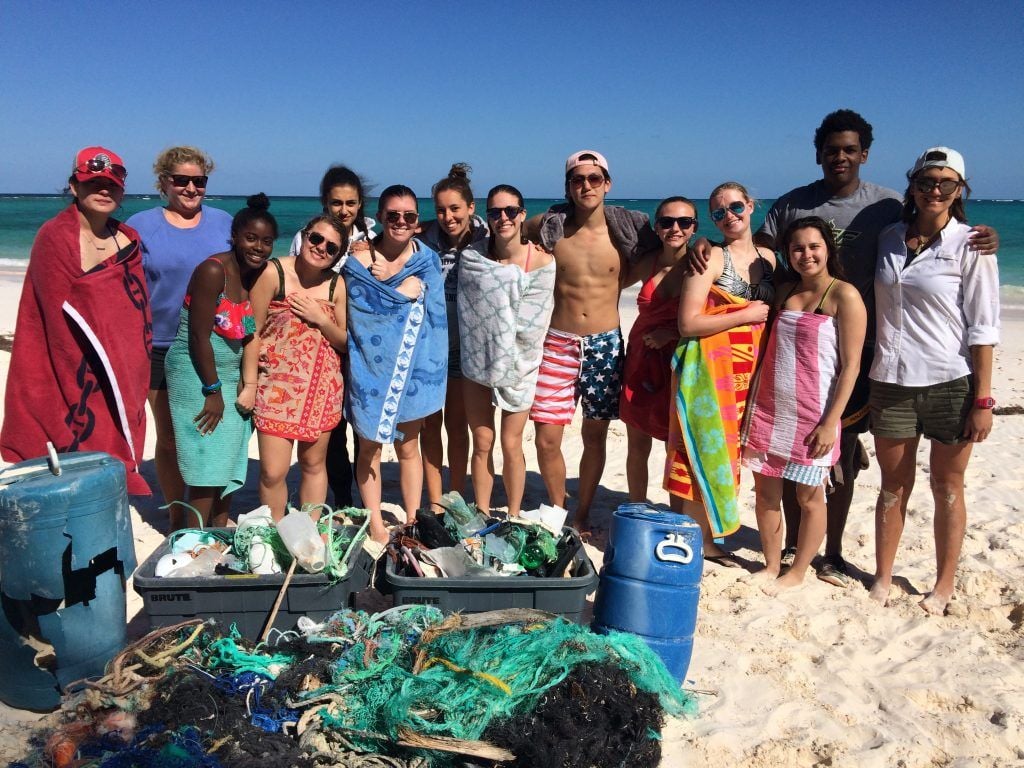 At the end of our action-packed day, we discovered the one species of fish that everyone wants to kill: Lionfish! Lionfish are an invasive species from the Indo-Pacific region who have infiltrated the Caribbean waters and up the Eastern Coast of the Atlantic, as they have no natural predators in the western hemisphere. Their uniquely extensive diet and tolerance to water salinity enables them to live to up to 15 years with a reproduction rate of 28,000 eggs that can be released every 4 days, beginning before the age of one. Because of their tenacity and overpopulation, there are no benefits to lionfish except for their taste. Due to this, many locals have banded together in the spearing of lionfish and subsequent fileting (even the vegans).

Think of the mangroves, think of your plastic usage, and kill the beasts! 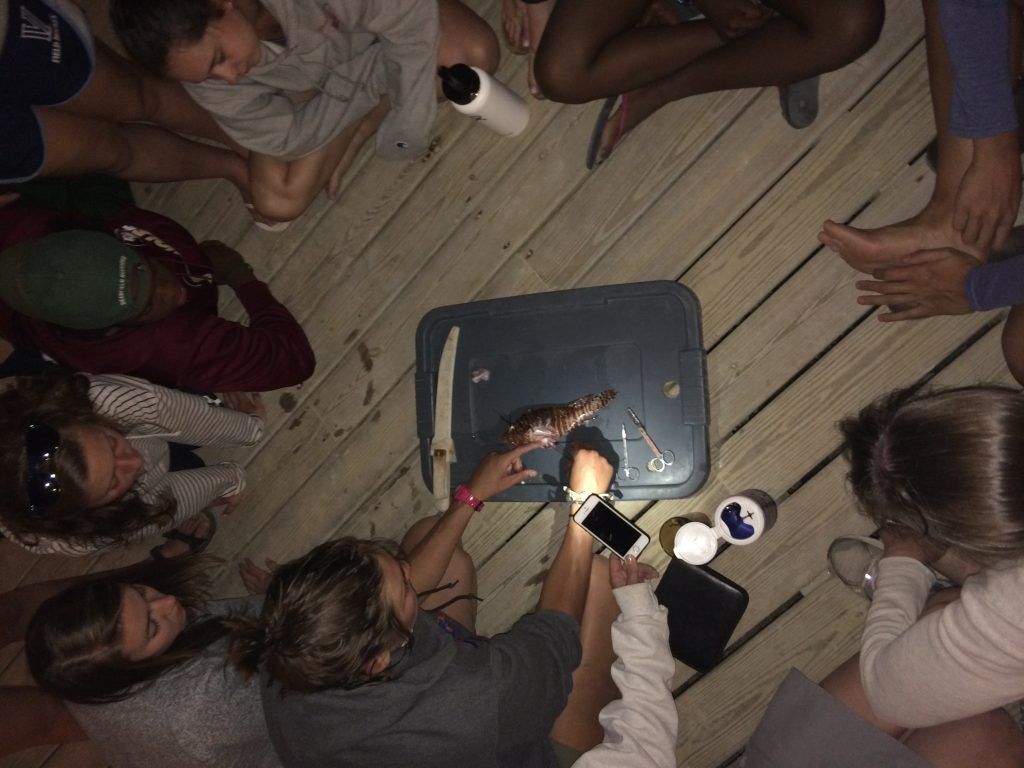 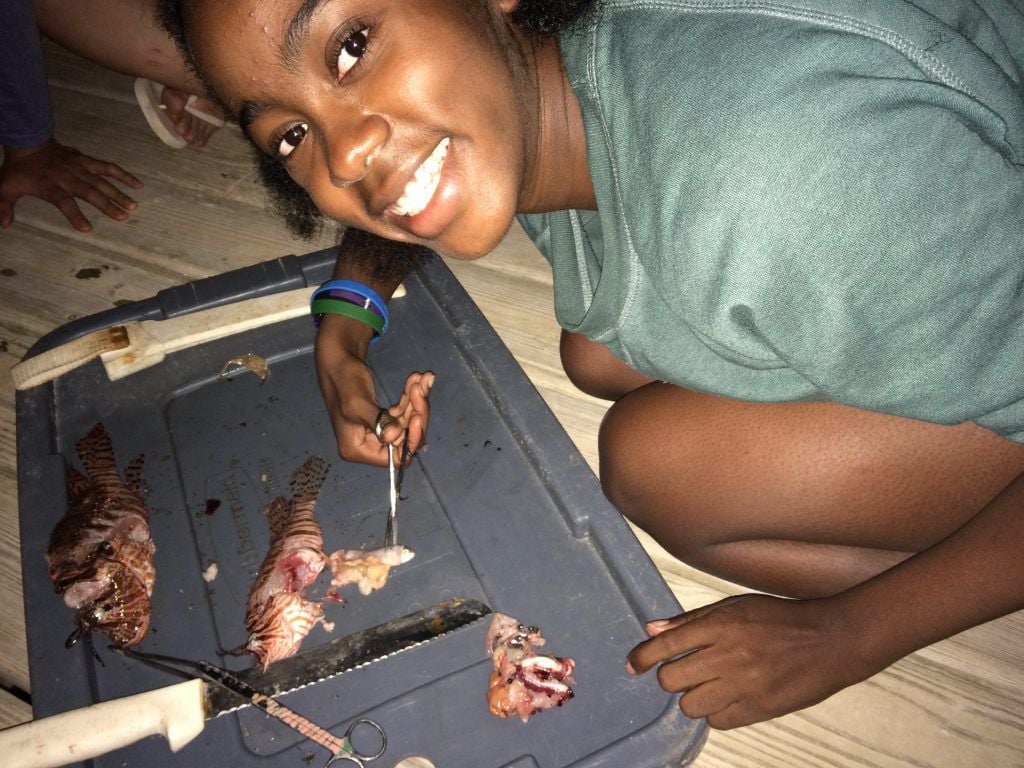