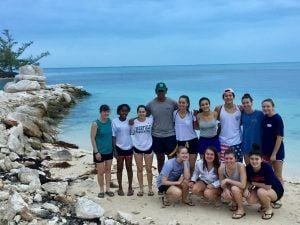 Kevin Gu ’18 and Josh Stevens ’18 recount their arrival to The Bahamas. Kevin tells a story about living out one the trip’s values, while Josh finds comfort on Eleuthera after a long travel day.

As we entered Nassau airport, I carried with me a sin. A plastic water bottle. I had purchased 12oz of Smart Water at JFK in preparation to combat dehydration, yet forgot to consider the availability of a recycling bin in The Bahamas. When we arrived at the airport in Nassau, I skimmed the entrance assuming there would be a blue bin waiting to claim my water bottle, but there wasn’t. Time and time again I would spot a silver trash can, but there was no recycling bin. It had been 15 minutes and I had yet to recycle my bottle. It wasn’t until after we had checked-in and had to go through security when I spotted a large blue bin with a white recycling logo on the front. Finally, I had found a recycling bin.

The only issue? It was behind a rope blocking me off, indicating that I was not allowed to go there. As I was walked through the metal detector and went to grab my bag off the belt, I asked the worker if she could toss my bottle in the recycling bin behind her. My question was met with a quick hand gesture pointing to a corner. I followed her finger with my eyes, only to see the familiar silver trash cans I’d been seeing for the past 30 minutes. Saying thank you, I quickly climbed under the rope and successfully disposed of my bottle into the recycling bin. However, it wasn’t unnoticed. She sternly stated that I was not allowed in that area. I apologized knowing that I had violated their rules, however content that I had deposited my bottle at its rightful destination.

Recycling in the Bahamas is not as strictly practiced as it is in the United States. Today was a first-hand experience with this. As an island, it’s hard to constantly export recyclables as well as landfill so as a solution, many establishments in The Bahamas simply combine the two and export them together. Recycling is a crucial process in sustainability, and it a challenge that many islands face.

When we came off the second of two delayed flights, my knees still hurting from being pressed against the seat in from of me. I was shocked to feel warmth again after two months of blistering Massachusetts cold. I looked down, not only trying not to bump my head on the doorway above me, but also to walk down the short and narrow steps that separated me from paradise. I would come to see a minuscule airport in compared to the giant JFK that we originally left from. This Bahamian airport had a sign that read “Welcome TO Bahamas,” in broken black paint that clearly withstood years of rain and storms.

After a ten-minute wait for our bags, I quickly walked up to the cart holding our luggage, pulling it down off the rack, trying not to make an avalanche. We all packed our bags in the Cape Eleuthera van and we were on our way. During our journey to the Island School, I was amazed by how nice everyone was. I thought it was over exaggeration when the guide said everyone waved when you drove past but it was the furthest thing from an exaggeration. Everyone we saw waved at us, the cars that drove past us honked, and the dogs the locals call “Pot Cakes” (due to the fact that most Bahamian cuisines are made with rice and the bottom of the rice is called a pot cake and they are fed to these dogs) barked at us. Not only the scenery amazed me, but the people did as well, it almost felt like I was at Deerfield. I had no idea how comfortable I would feel in a country fifteen hundred miles away. 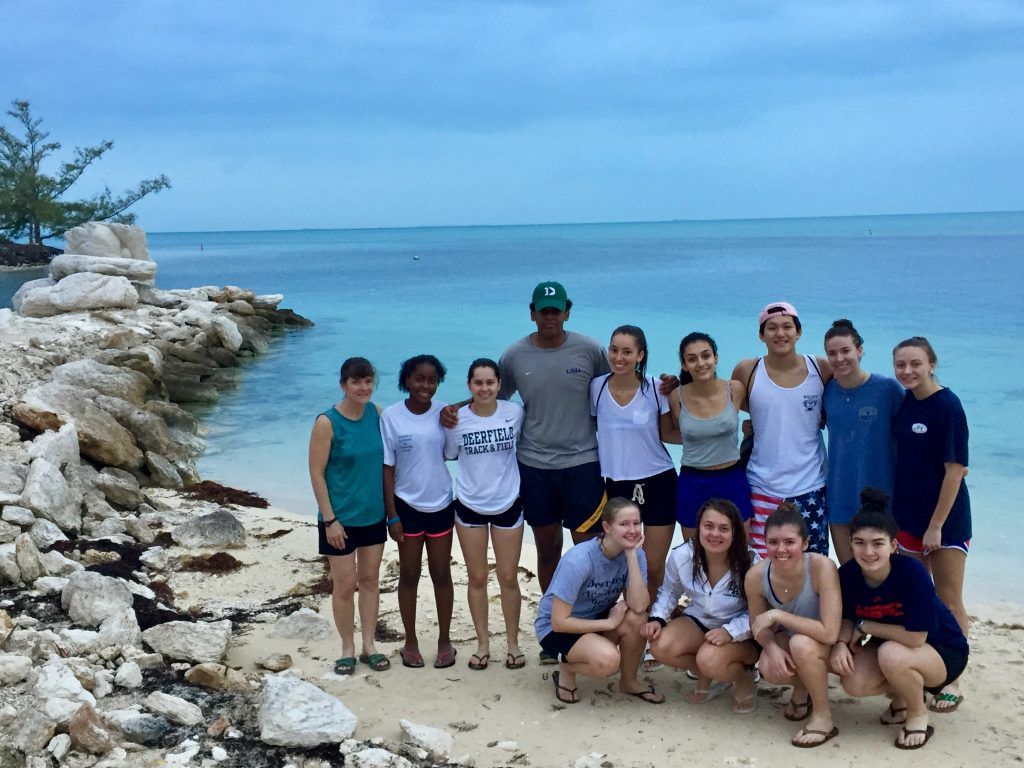 This morning, the students headed to the beach to complete a swim test. With daylight savings, the sun was just rising!