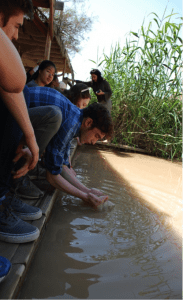 Feeling energetic after an intense cardio workout, I browsed through the itinerary and was exhilarated to launch into another day of exciting adventures. We began our day attending a class on Islamic Theology led by Ms. Zuhaira Salman, chair of philosophy and religion studies at King’s Academy. Students first explained to us the reasoning behind Friday-Saturday weekends in Jordan, noting that many Muslim students attend prayers at the local mosque on Fridays, and shared their thoughts on what it means to have a King from the Hashemite tradition, whose lineage can be traced directly to prophet Muhammad. Afterwards we split into groups and embarked on a discussion of Jordanian holidays, cultural traits of Jordan, power and leadership, as well as one of the mottos of King’s Academy, “Stay curious.” It was truly a fruitful experience meeting this group of bright individuals and hearing their unique commentaries on Arabic culture and global issues.

After an insightful morning at King’s, we hopped on the bus and visited the baptism site of Jesus Christ alongside the Jordan river. Jordan is a country of immense cultural and historical depth, with a multitude of religious sites for Christians, Muslims, and Jews alike. The baptism site is one of these important locations hundreds of individuals visit every year. The historic moment of Jesus’s baptism was depicted in the Bible by Matthew:

“As soon as Jesus was baptized, he went up out of the water. At that moment heaven was opened, and he was the Spirit of God descending like a dove and alighting on him. And a voice from heaven said, ‘This is my Son whom I love; with him I am well pleased.’” (Mt. 3:16-17) 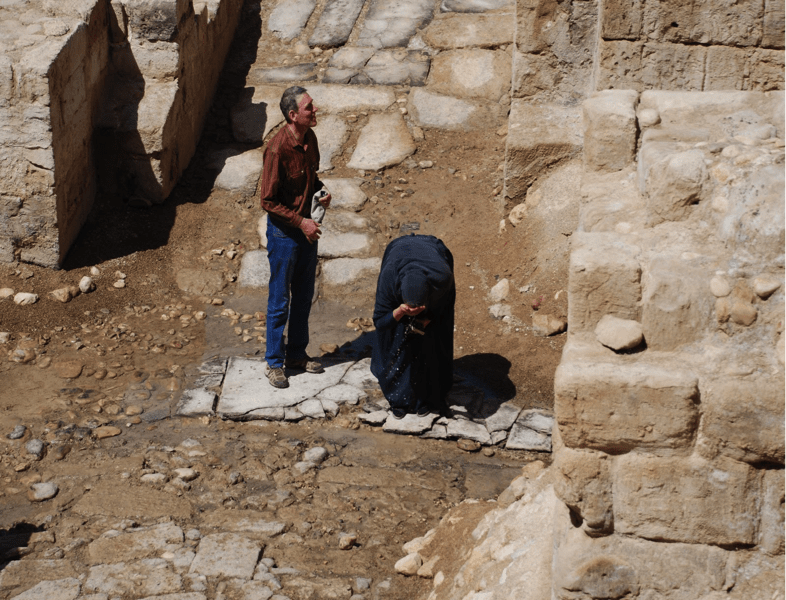 A holy woman blessing herself and the students, with the water from the baptism site. (Photograph by Gabriella Hu ‘21)

Visiting places such as this one, which are recorded in ancient texts like the Bible and subsequently chronicled by numerous pilgrims, help me realize and appreciate the depth of history outside America. We continued along the rustic dirt path with a natural roof shielding us from the sun to an opening at the Jordan river. This body of water is the disputed border between Jordan and Palestine. As a result of this, armed militia patrolled each side to guard in case of conflict. Even with this stiff political climate, people on both sides bathed, prayed, sang, and swam in the holy waters. This demonstrates how a common belief ties together people of different backgrounds, nationalities, or sides of a conflict. 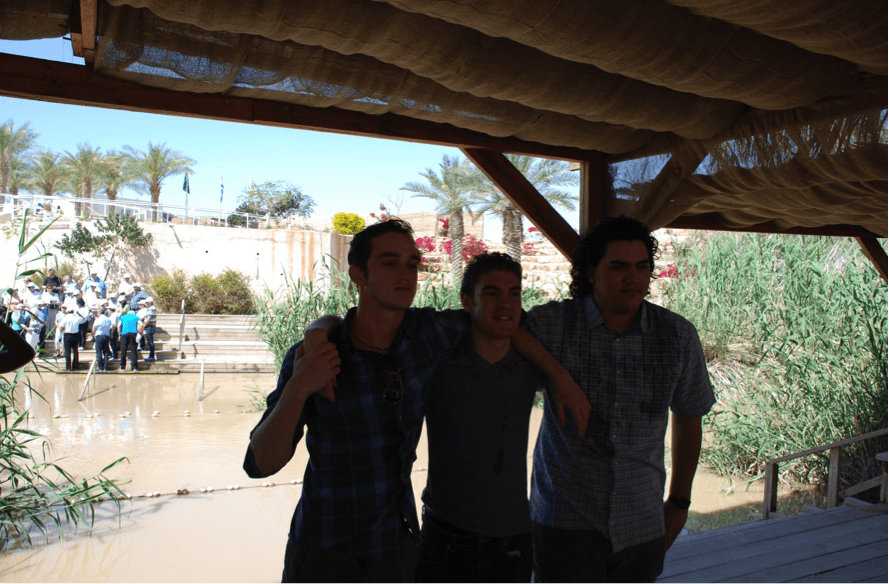 More so, this transformative experience for the spiritual disposition shared by Jews, Christians, and Muslims exemplifies how all belief systems, regardless of formality, amounts to a common aspiration for truth, love, and goodness. A Buddhist myself, I sensed a deep connection with the sacred earth on which I set foot and the river in which I dipped my fingers. The juxtaposition between this sacred site and an adjoining battlefield was tragic proof of how we are too often entrapped by outward differences, definitions and superficial boundaries, failing to realize the fundamental unity shared by all faiths. Most memorable to me was the moment when the people, after bathing in the holy river, chanted a beautiful hymn in unison, epitomizing the transformative power of music as a universal language that transcends boundaries and speaks directly to the soul.

Looking across to the Palestinian bank of the river, I noticed a large, commercialized stone structure. Tour busses full of people speaking English, Chinese, and Hebrew pulled up to the parking lot and unloaded. The juxtaposition of the built up Palestinian side and the rustic Jordanian side was an interesting insight into the culture of the area and how the tourism industry impacts the landscape.

In due course we visited a nearby souvenir store and departed for a local restaurant, where we enjoyed a delicious meal of traditional Jordanian food. We then set off for the Dead Sea, where we marveled at the spectacle of its boundless expanse, rubbed sumptuous amounts of Dead Sea mud all over ourselves and, heeding the advice of our friends at King’s Academy, suppressed our inclinations to splash and swim, and allowed our torsos to relax afloat. Making the worst mistake of accidentally opening my eyes in the sea, I felt so grateful upon arriving at the shore where fresh water was available for alleviating the sting. 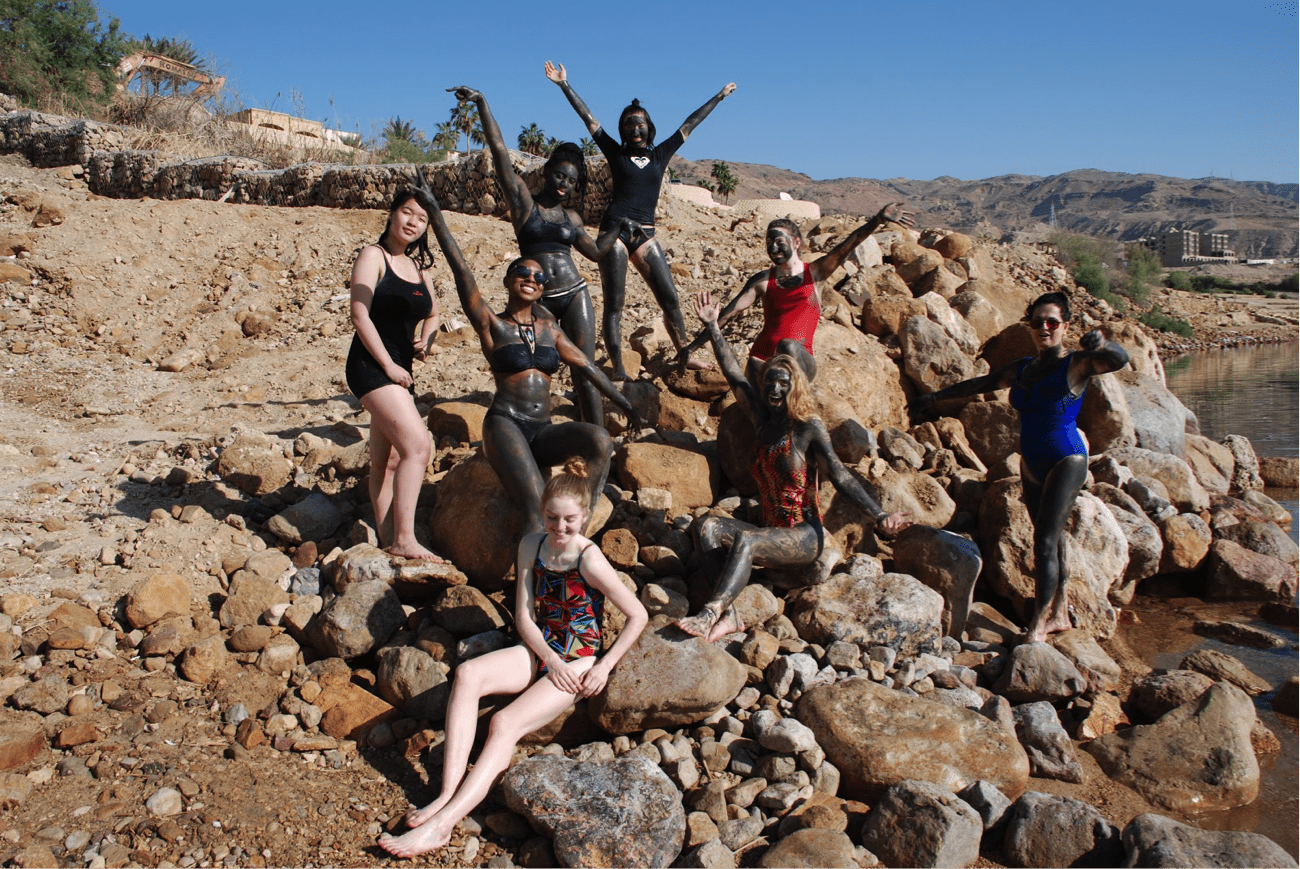 Relaxing ashore with a novel at hand, I gazed in awe at the glittering azure before my eyes, rejoicing as I basked in the splendid sunlight. At the other side of the shore was the territory of neighboring Israel, clearly a mountainous silhouette but too indistinct for me to discern any intricate details. It is a land no different in essence than any other place in the globe, inhabited by peoples who developed unique languages, customs, beliefs, and traditions as history unfolded and took pride in the richness of their heritage. Like Jordan, it carries profound cultural and historical depth as a cradle of human civilization, and witnessed the origins and convergence of belief systems throughout history. But sadly, it is also a land of dispute ever since its emergence, where the Israeli-Palestinian conflict, arguably the most acute of discords in the Middle East, takes place. 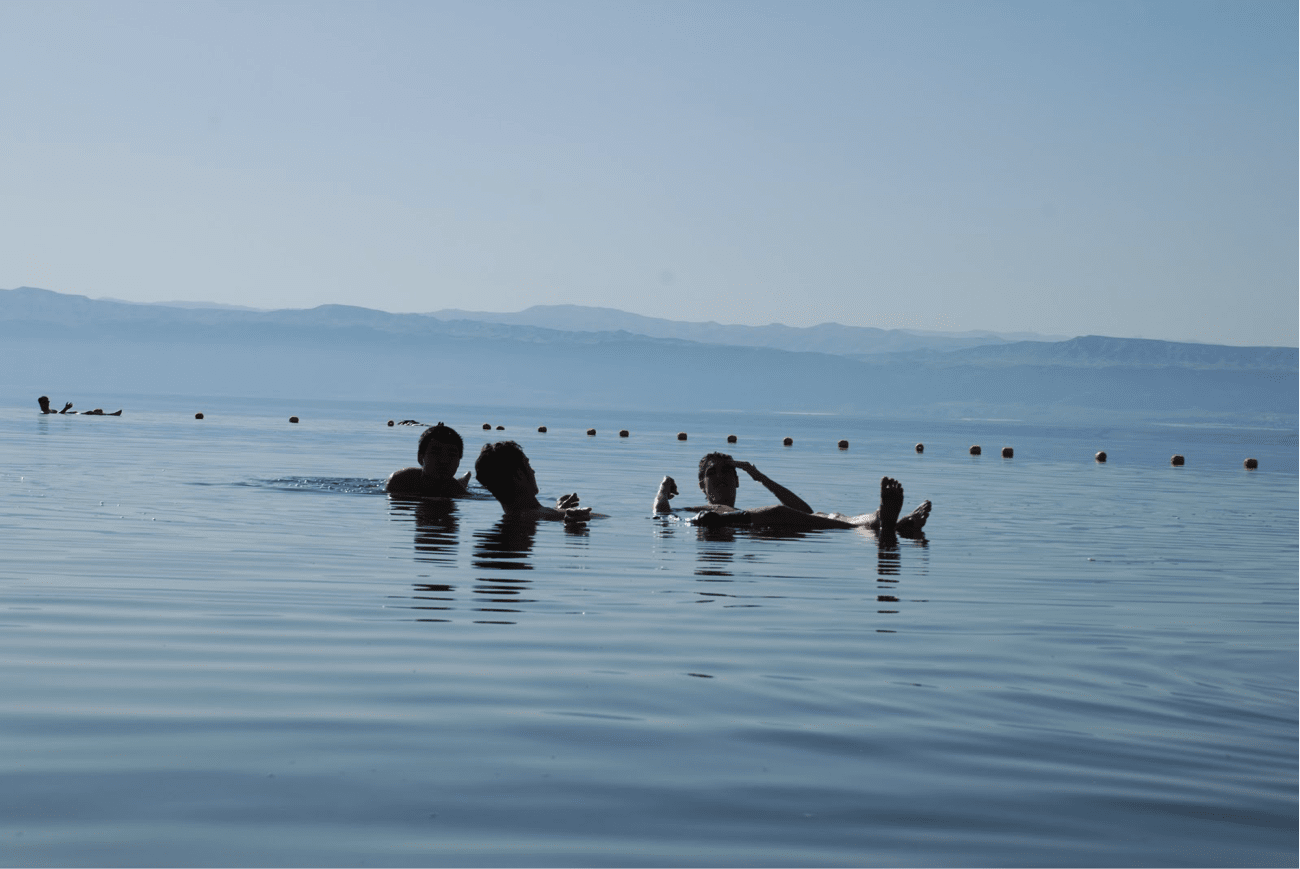 Numerous instances in history, stemming from as early as the White Man’s Burden that underlied the British Mandate in late WWI, drew attention to the “otherness” of the Middle East. Today, consumerism as well as inherent geographical and chronological biases of the media further this stereotype, while provocative descriptions and tags that spread terror and promote segregation of religion, race, and class serve only to elevate these dangers. In his autobiography Our Last Best Chance, King Abdullah II warned against the rising dangers of a growing mentality of division between the Middle East and the Western world. Having read the works of Khaled Hosseini, an Afghan-American author who shed light on Afghanistan’s culture through his novels and became UN ambassador to his nation, I felt the mission to spread, by means of personal expertise, the recognition of our commonality as human beings unrestrained by boundaries of faith and ethnicity.

Exhausted from a full day of activities, we slept our way through the bus ride and had a quick dinner to make it to the King’s Academy Annual Dance Showcase at 6:45pm. The showcase opened with dabbkeh, a form of traditional Jordanian dance, against the backdrop of festive, jubilant music. Also included in the program were a series of interpretative dances, modern dances, and a Chinese traditional dance, manifesting diversity, openness and welcoming spirits. The dance showcase, as we later discussed in our daily reflections, again challenged and transformed our perception of this region of the globe.

Immediately following our group meeting, we gasped in excitement upon receiving an email notifying the arrival of the King on Thursday during school meeting. This trip has been an immensely enriching experience thus far and I look forward to visiting Mount Nebo, Petra, and Wadi Rum in the remainder of this journey.