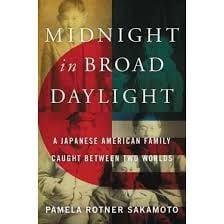 A Japanese-American family, having lived for 20 years in Washington state, relocates to Hiroshima after the father’s death during the Great Depression. Harry Fukuhara, the third son, returns to the US after graduating from high school in Japan – only to be forcibly removed by the US government to isolated internment camps, the only escape from which is into the US Army. Harry serves as an interpreter, island-hopping across the Pacific and drawing nearer to his brothers, who are by now doing compulsory service in the Japanese Imperial Army. Pamela Sakamoto tells the riveting story of a family “caught between two worlds” in her book Midnight in Broad Daylight. Join us at 6:45pm in the Garonzik on Tuesday to hear more!