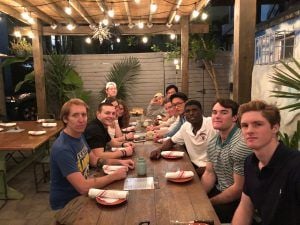 Pat Logan & Avery Reed
Our work so far has made us curious about what are the leading conditions to crime in certain pockets of Miami city. We are interested in the different cultures and their prejudices towards other minorities within the city. From our research so far we have gotten a lot of demographical information on the neighborhoods themselves, but not a lot of information regarding personal relationships and everyday lives of the people living there. We believe that visiting these neighborhoods, although rather dangerous, would be valuable experiences to meet people and learn the habits of the hard-working people that live in these pockets. We are further interested in learning about the ever-decreasing sizes of these neighborhoods, as we recently learned that rich neighborhoods have been expanding rapidly and diminishing the size of lower income neighborhoods. It is clear that there are many different cultural neighborhoods surrounding downtown, but we would definitely like to explore what causes the conflict between them (for example, Haitians hate Jamaicans, Jamaicans hate El Salvadorians, El Salvadorians hate Nicaraguans, etc.). It seems that most of these neighborhoods, although low income and crime-ridden, are filled with pretty hard-working people who often work multiple jobs to provide decent lives to their children. We would like to know why there is so much conflict between these different cultural pockets.

Christophe Coté, Eric Kim, and Tierney Roche
Our work so far hasraised our curiousity about different people’s interpretations of art. Yesterday, we interviewed Douglas Hoekzema (Hoxxoh) in North Miami; he told us that he did not have any specific purposes or messages he wished to get across in his wide variety of artwork. Luis Valle also said that his pieces were created to be open to interpretation. Today, we spent most of our time in Wynwood exploring the artwork there, especially spending time in the Wynwood Walls area. We viewed art of many different genres there, and interviewed various people about their thoughts on the artwork. One of our group members focused on abstract art, and found that many people couldn’t name anything that came to mind when looking at these pieces. Some people tried to find non-abstract things in the abstract paintings.

From our experience exploring art in Wynwood and Northern Miami, we would like to explore further the messages (or lack of messages) of artists and perceptions of art from different viewers. We enjoyed speaking to pedestrians looking at street art and hope to spend more time doing so for other pieces of artwork, to get more opinions and viewpoints that we will eventually write about in our research papers.

Colman Shea & Karen Trovamala
Because I’m learning so much about the dissident movement and what it means to the Cuban population here in Miami, I want to go to Cuba and explore the real rebels. It would be so cool to see the actual rebels of Cuba that have been fighting for five decades for democracy, a freer market, and simply a better way of life.

However, I learned today that one couldn’t simply put this whole group of people into one basket as if they all have the same methods of achieving these goals. There is a spectrum. On the right side, there are the hardline, conservative militants who have used violence and terrorism in the past to fight Castro. Now they promote isolationism on the island to put pressure on the government.
On the left side, there are the more liberal Cubans. They back groups such as Roots for Hope, which reach out to Cuban youth and truly believe in the future. They call this engagement, a way to proactively strike change in Cuba.

Inho Choi & Nick Osarenren
As a group, Nick and I focused on shoe culture which is mainly associated with streetwear. One of our stores we were exploring was located in a mall that had a few high-end stores. Knowing that these stores also had sneakers that are sought after, we entered and were more blown away than any store we had previously entered. There were so many high-end stores that had such an amazing selection. Even when we first walked around in the city, we noticed an astounding number of people wearing recognizable, expensive brands, and driving very luxurious cars. It almost seemed as if people are showing off in public.

After witnessing these high end stores and the people who were frequent customers of these stores. I could not help but be amazed at the sight of these wealthy people eagerly dishing out an upwards of 1k on tennis shoes. This scenery was totally different than that of the streets as homeless people were common commodity among the sidewalks. Choi’s and I love for sneakers has led to the fascination with the disparity between the rich and poor in Miami. While many can afford to fund the growing trend of luxury sneakers, there are still many that can not. And maybe this is a demographic that the people of Miami should pay attention to.

Jose Boyer & Connor Finemore
Although our main focus in Miami is the opioid crisis, another unforeseen area that interests us is the homeless population in Miami. During our travels in and around the city we have seen a number of homeless people on every single journey. We had no idea that there would be such a large homeless population in Miami. While Miami is a huge city, which naturally yields homeless people, the size of this particular city’s population is noticeably greater. I go to New York City often and I have seen more homeless people in Miami in two days than the past five years in New York. We are really curious as to why there are so many homeless people? Does weather play a role? Does our topic, the opioid crisis, play a factor? Is it simply a function of what parts of New York we visit versus what parts of Miami we have visited while here? Median household income in Miami-Dade County is $41,913 compared to New York’s $50,711. Perhaps it’s simply in the 20% difference in median socioeconomics between the two. A better comparison might be Chicago. Regardless, on a longer trip, the topic of homeless might be an interesting area to explore further.