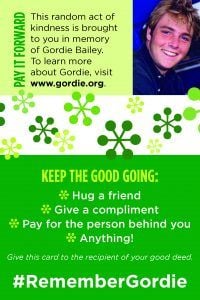 Many of you know (or will soon know) the story of Gordie Bailey. Gordie graduated from Deerfield in 2004 and within two weeks of attending college that fall, tragically died from alcohol poisoning. Since then, his family has focused on establishing a foundation that emphasizes a message of recognizing the signs of alcohol poisoning and making a life saving call to help a friend. However, in the last two years, the foundation, while still promoting life saving measures, has turned its focus on remembering Gordie for what he was best at: Being Kind.

We have been hearing a lot lately about the power of kindness thanks to a Ted talk by Reagan Hill and announcements by Dr. Curtis. For those of us who knew Gordie, he was a friend to everyone on this campus. He cared deeply for his fellow classmates, dorm-mates, football and lacrosse teammates, and fellow actors, as well as teachers and staff. He had a huge heart, and one way he showed that was by starting the Hug Club. Members were asked to just give out hugs to anyone who needed or wanted (or who were ok with) a hug. As Reagan pointed out, the simple act of giving a hug or doing something kind for someone not only makes that person feel better but reduces your stress as well.

Today, Feb 22, would have been Gordie’s 32nd birthday and to remember him, we, like many high schools and colleges across the country are passing out Gordie Kindness cards. The cards ask you to perform a random act of kindness and pass along Gordie’s story. Obviously you don’t need a card to do something kind, but if you would like to have one, or a couple, and pass it along on or off campus, please pick them up in the lobby as you leave lunch today. I’ll end with a favorite quote from an unknown author: “In a world where you can be anything, be kind”. Thank you