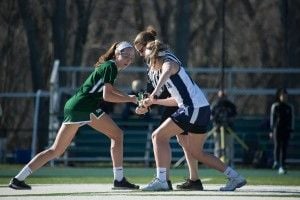 “We had a strong team and a strong season,” says Coach Allison DiNardo, “because we had both the experience and the talent in place to make a very good showing of ourselves.”

Ending the 2016 season with a record of 9 and 5, an abundance of seniors (nine) on the roster helped to get Deerfield off to a fast start, game after game. And those more experienced players were ably assisted by a talented crew of juniors, tenth-graders, and half a dozen extraordinary ninth-graders—an unusually high number for that age group—leaving the Big Green in excellent shape as the team already looks forward to 2017.

One of DiNardo’s returning stars is Meghan Halloran ’17. Standing in at 5’-10”, Halloran uses her height to good advantage—particularly during draws.

“Meghan uses her height advantage to leap up and pluck the ball out of the air over her defender,” says DiNardo. “She controlled 43 draws in 13 games last year, and that’s awesome, because whenever she’s successful, we’re instantly on offense.”

Halloran, who is also a mainstay in soccer and hockey, where she tallied 21 points on ten goals and 11 assists this past winter, is what DiNardo describes as a “coast-to-coast player,” meaning she plays a crucial role in both the Big Green’s offense and defense. “It requires a great deal of stamina to be continuously running from one end of the field to the other, then back again,” says DiNardo, “but Meghan plays a really critical role for us in each zone.”

According to DiNardo, though, there’s much more to Halloran than just her ability to run and jump.

“Meghan’s a phenomenal kid and a selfless athlete … she’s works hard and is a delight to coach,” says DiNardo. “She’s smart, too. She knows the game, understands it, and when it comes to showing her how to do something, you only have to show her once.”

What also helped the Big Green Girls to their winning season was the fact that Halloran wasn’t the only one to whom the moniker “Coast-to-Coaster” applied: the recently graduated Annie Blasberg ’16 and Alli Norris, who will be a junior this fall, were also highly deserving of the title. Midfielder Elizabeth Growney ’16 tore up the turf as well, while at the other end of the field, Co-captain Elliot Gilbert ’16 was situated between the pipes. During her junior year, Gilbert, who will be playing at Washington & Lee University this coming fall, averaged 15 saves a game, “and was a constant presence for us in goal,” says DiNardo.

Rachel Sit ’16, the Big Green’s other co-captain this season, was named an Academic All-American, and headed up a defensive unit that included Jordan Coan ’18, Chloe Sweet ’16, and Olivia Jones ’18.

DiNardo’s offense had a familiar look to it, led by two seasoned attackers: Kathryn Grennon ’17, Nina McGowan ’16, and one newcomer, Bailey Cheetham ’19. In addition to Growney, the midfield area was kept safe and sound with experienced players that included Blasberg, McGowan, and Kyra Kocis ’16.