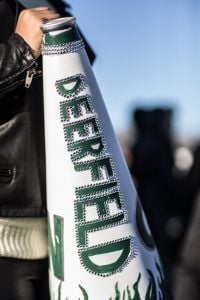 On International Women’s Day and every day, we are proud of the Deerfield alumnae working to improve their communities and the world. Here are just a handful of alumnae we’ve been particularly inspired by:

Kendra Stitt Robins ’90: Kendra is the founder and executive director of Project Night Night, an organization that donates over 25,000 “Night Night Packages” each year to homeless children 12 and under. Project Night Night provides childhood essentials so that children have a concrete and predictable source of security and an increased exposure to high-quality literacy materials during their time of upheaval.

Jay Newton-Small ’93: is co-founder and chief executive officer at MemoryWell, a digital platform for storytelling that brings the skills of professional journalists to the challenge of helping seniors tell their life story. Jay is a long-serving Washington correspondent for TIME Magazine and author of Broad Influence: How Women Are Changing the Way America Works.

Gigi Parris ’99: for a decade, Gigi has been fighting to keep families together as a public defender in the New York City family court system. She serves as supervising attorney at the Neighborhood Defender Service of Harlem.

Jessica Harrison Fullerton ’00: as associate director of the Deworm the World Initiative, the 2017 Ashley Award recipient worked to eliminate parasitic worms as a public-health problem worldwide. Jessica now serves as the director of Planning and Operations at International Rescue Committee in New York.

Claire Woo ’02: with a PhD in chemical engineering from UC Berkeley, Claire is a renewable-energy visionary. She has worked to build electricity networks on a local scale, and is now head of technology and co-founder at Blueprint Power.

Caitlyn Fox ’03: as director of Policy and Advocacy at the Chan Zuckerberg Initiative, Caitlyn helps to plan and manage the long-term strategy of the philanthropic initiative founded by Priscilla Chan and Mark Zuckerberg with the aim to “advance human potential and promote equality in areas such as health, education, scientific research, and energy.”

Elisabeth Reed ’05: a former Naval aviator and State Department officer, Elizabeth is a lead consultant for Boots to Boardroom, helping to provide training and career support for military members transitioning from active duty service into both the civilian workforce and top MBA programs.

Molly Schaus ’06 – Ashley Award Recipient 2018: Molly is finishing her third season in the Anaheim Ducks Fan Development Marketing department where she currently oversees Ducks S.C.O.R.E., the team’s educational outreach initiatives that promote academic excellence and physical fitness through hockey for over 60,000 students annually. Molly joined the Ducks after an illustrious ice hockey career. After Deerfield, Molly played goalie at Boston College (Lynch School of Education ’11) and helped lead her team to 3 NCAA tournaments and was named First Team All America her senior year.  In addition, she played for the US Women’s National Team from 2008-2015, winning two Olympic Silver Medals and four World Championships. Earlier this year, she became only the second female athlete in Boston College history to have her jersey retired, the first women’s hockey player to receive that honor. In addition to her role with the Ducks, she continues to partner with organizations such as Right to Play and the International Olympic Committee to spread the power of sport internationally.

Anna Pettee ’13: Anne was one of the first proctors for The Experimentory at Deerfield Academy and is currently serving with a Peace Corps project in China.

What Deerfield alumna inspires you?