The Deerfield Boys Rowing program enjoyed a record-setting spring season that saw the squad win their first-ever New England Team Championship with victories in the 1V4+, 3V4+, and 4V4+.  The 1V4+ later added the program’s second national title at the US Rowing Youth National Championship (the first came back in 2012).

Following their domestic season, a group of 19 boys traveled to England to try their hand against some international competition.  The three week trip provided an opportunity for the crews to compete in three different regattas, where they raced against top high school and university programs from around the globe. 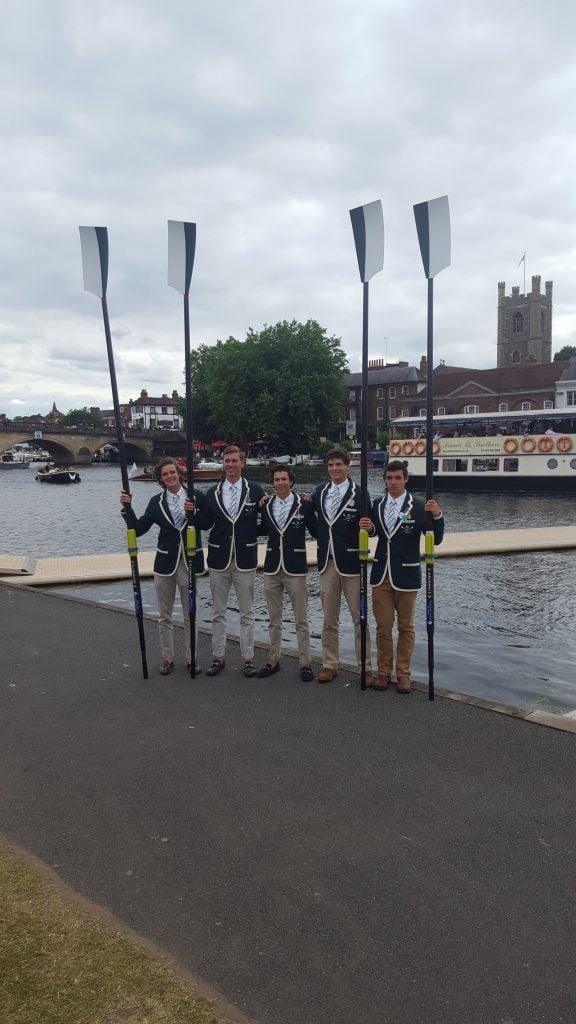 First up was the Marlow Regatta held on Dorney Lake, the site of the 2012 London Olympics, and home to the Eton College rowing program.  At Marlow, the 1V4+ and 2V4+ competed in the Tier 2 4+s event against a field made up of primarily university crews.  After solid racing in the morning Time Trial, both boats raced well in the afternoon Finals with the 1V4+ finishing second behind a strong crew from Newcastle University in the A-Final and the 2V4+ taking 3rd in the B-Final.  The Deerfield 8+, racing for the first time together, and for the first time over 2000 meters, also competed against a number of university crews as well as top high school crews from the US and England.  A strong effort in the E-Final earned them a win as they made some great progress throughout the day.

After a week of training on the historic Henley Royal Regatta race course, both the 1V4+ and 2V4+ were required to participate in the Henley Qualifying Race, a time trial to determine the final entrants for the regatta (the 8+ had been preselected by the Regatta Stewards).  In the Prince Albert Challenge Cup, a university event for 4+s, 8 crews had been preselected by the Stewards and the remaining 8 crews that would complete the field would come from the time trial.  In all, 29 4+s were vying for those final 8 spots and Deerfield’s 1V4+raced well enough to earn a place in the regatta.  The 2V4+ competed well and beat a number of strong crews, but didn’t finish in the top 8.

The following day, both the 8+ and 2V4+ traveled out to Reading to compete in the Reading Town Regatta, an 800 meter sprint race.  With multiple races throughout the day, both crews had the opportunity to work on various parts of their race plan, particularly getting off the start line with speed.  Each boat showed good speed against strong opponents and both made great gains that would prove valuable in future training and racing.

Following their final days of preparation, both the 1V4+ and the 8+ were ready to race at Henley, one of the most unique and competitive rowing events in the world.

The 8+ raced in the Princess Elizabeth Challenge Cup with a field that featured some of the best schoolboy crews from the US, England, and Australia.  On Day One, they drew a match up with the Haverford School from Philadelphia, PA, a crew that had had a strong spring season, including a 9th place finish at the Scholastic National Championship in early June.  The Deerfield boys proved to be up to the challenge as they gained control of the race from the opening strokes and eased away throughout the piece.

8+ Day One vs. Haverford – https://www.youtube.com/watch?v=AwiNi83kwig&list=PLgHoN6LLDp_8oWhKVxRqodDEApjTBvDR7&index=16 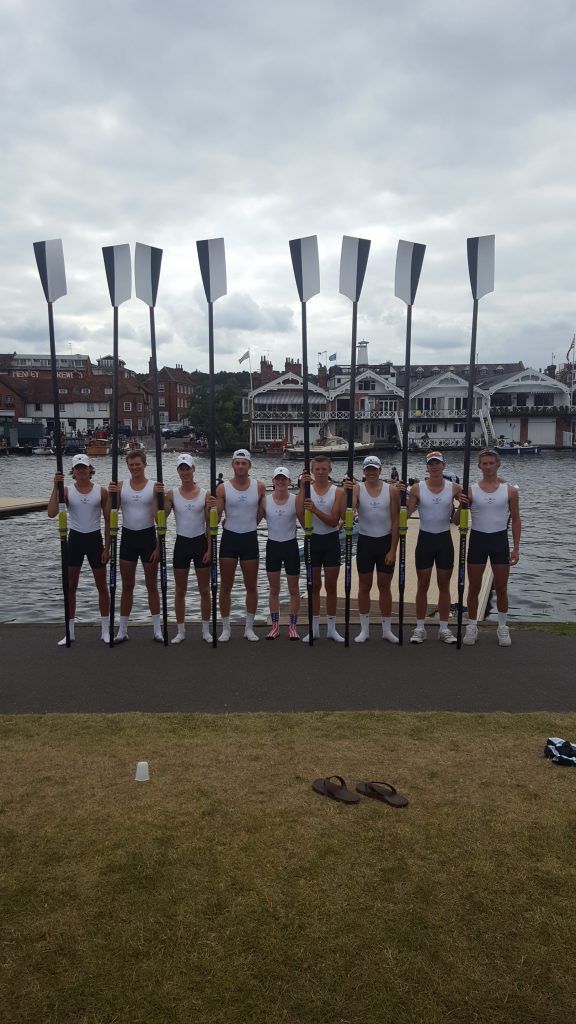 With their win on Day One, the Deerfield 8+ moved on to Day Two and a match up with the Kent School from Kent, CT, a perennial NEIRA powerhouse in 8+s.  Kent had swept the three 8+s events at the NEIRA Championships in late May, so this would be a race between the New England Team Champions in the 8s and the New England Team Champions in the 4s.  A fast start from Kent saw the Deerfield crew down more than half a boat length as the race neared the midpoint, but a good push from the Deerfield boat reversed the momentum and they slowly clawed their way back to level.  As the race entered the closing meters, the Deerfield boat continued to push and ultimately secured the win and the opportunity to move on to Day Three.

On Day Three, Deerfield drew Eton College, one of the top school programs in the world.  They had finished a close second at the British School National Championships earlier in the spring and had shown great ability in the opening days of the regatta.  While the Deerfield boys raced aggressively, they weren’t able to match Eton’s speed, ultimately falling to an exceptional crew, but they put forth an impressive performance.

The Deerfield 1V4+ became just the 3rd school crew in history to earn a place in the Prince Albert Challenge Cup; a race dominated by university crews.  The Deerfield boys continued their impressive performance when they became the first ever high school boat to win a race in this event with an epic effort against Trinity College Dublin. The Deerfield crew nudged ahead after a quick start and then defended challenge after challenge all the way down the course, never getting more than a couple of seats advantage.   The final margin was 4 feet as the race proved one of the most exciting of the day!

On Day Two, Deerfield drew the strong Newcastle University crew that they had raced at the Marlow Regatta.  Both crews blasted off the start line and were level as they shifted into the base of the piece.  But the strength and experience of Newcastle began to show through as they eased away through the body of the piece to pick up the win.  Newcastle would go on to win the entire event and set the course record by 6 seconds in the Final on Sunday!

For the program’s first trip to Henley, the boys certainly made their mark.  The 1V4+ became the first high school crew in history to advance beyond Day One in the Prince Albert, and the 8+ made it to Friday in the Princess Elizabeth, which equaled the efforts of other top US crews (no US high school crew progressed further than DA).  As they’ve done all season, each crew raced well and showed incredible toughness, resiliency, and composure.   They made significant gains as individual athletes and as collective crews while representing Deerfield well on the international stage.  All in all, a fantastic trip to an incredible place!  Well done, boys, on an outstanding season! 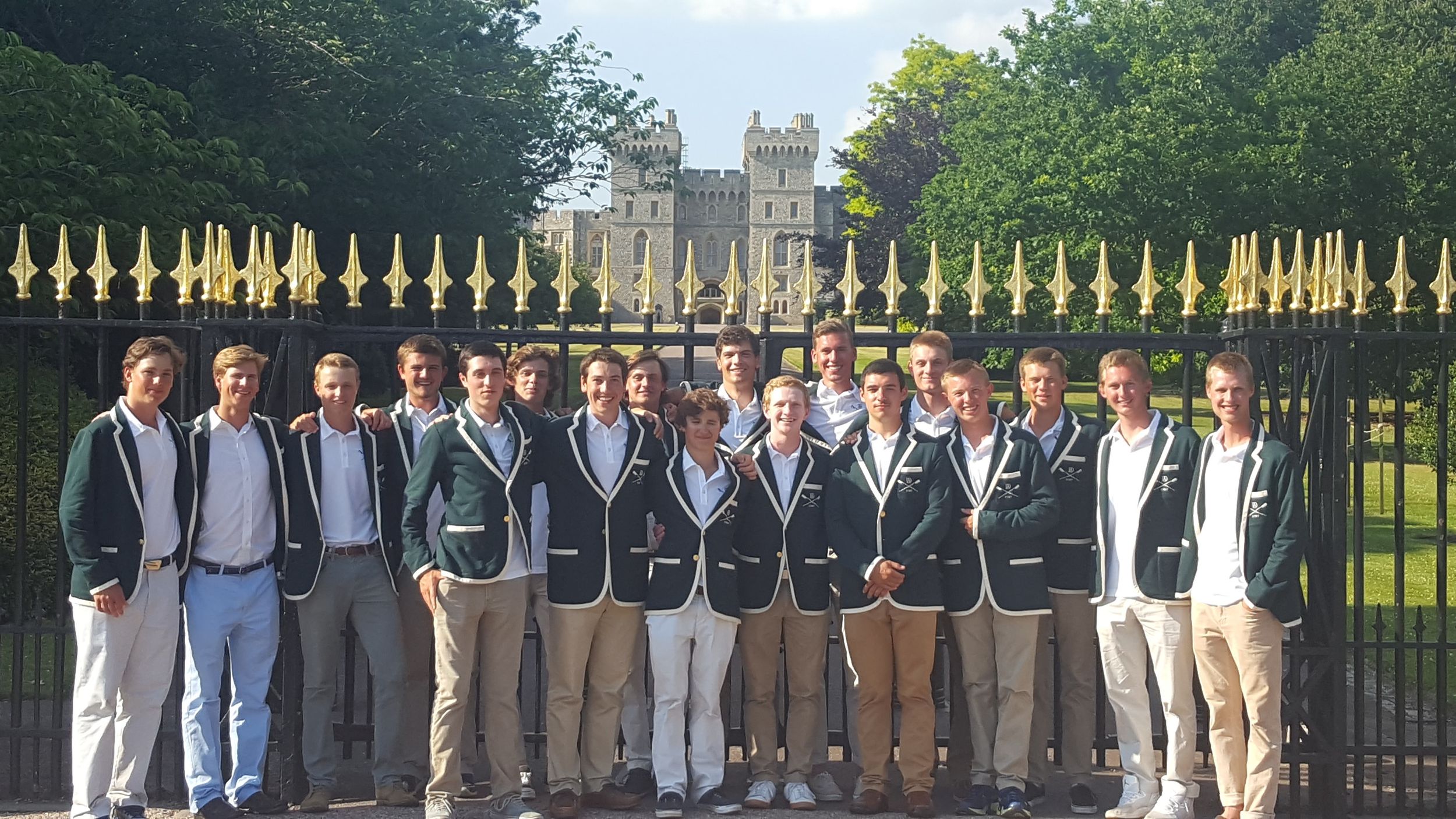