The invitational portion of Deerfield’s season drew to a close on Saturday, when the Big Green headed south to participate in the Richard Miller Invitational on the campus of The Westminster School.  The coaches and athletes from Westminster always put on an efficient, fun meet, in addition to serving as gracious, welcoming hosts.  Though the course is challenging, the meet is always a highlight of the season and a wonderful way to conclude the first leg of the season.  After edging the hosts by five points in the varsity race in 2017, the tables turned this year as Westminster ran a great team race to beat Deerfield’s boys by six points.  But, Deerfield maintained their strength in the junior varsity race, winning that event for the second straight year.

Despite being well maintained, Westminster’s course always runs as one of the slowest and most challenging courses in New England.  This year was no exception.  Despite fine conditions—the day was pleasantly warm and sunny—a week of regular rain kept the footing soft and the trails muddy, leading to slower times the competitive nature of the race would suggest.  The varsity boys ran first on Saturday, and Westminster’s senior captain left no doubt from the crack of the gun, running away from the field to equal the course record.  Deerfield’s top runner, Ricardo Gonzalez, wisely ran his own race rather than let Westminster’s star wear him out.  Ricardo ran a smart race—other than a wrong turn in the final quarter mile!—and never relinquished second place throughout the winding trails and hills.  His fellow captain, JJ Siritantikorn ran a bold race, surging to the front of the chase pack in the first mile and fighting through the remnants of a cold to hold on for fifth place overall.  It was JJ’s first time as Deerfield’s #2 runner in a varsity race, a place he worked hard to seize.  Right behind JJ came Thomas Lyons, who raced with characteristic patience and strength across the last mile to grab seventh place, a mere second behind his teammate.  Tom Dillon, Deerfield’s third captain, returned to action after nursing a sore achilles tendon all week, and captured tenth place, followed by Charlie Lewis ’21 in 13th.  Mat Panikar (16th) and Jake Meier (27th) rounded out Deerfield’s varsity seven.

After watching the girls’ varsity cruise to another victory, the junior varsity race was up.  The Deerfield squad is awash in young, talented runners, so the JV race was a coming out party of sorts, a chance for a number of new students to turn in their first 5K in the green and white and see where they stack up after several weeks of tough training.  Deerfield’s runners ran wisely at the start of the race, letting an athlete from the Kent School shoot out into the lead; a pack of four green jerseys chased him into the woods, about a mile and a quarter into the race.  When the racers emerged from the woods with about a half mile to go, it was as a green wave: Deerfield captured the first four spots at the finish line, led by ninth-graders Will Grosse and Trey Souder.  Their tenth-grade teammate, Declan Cullinane, was next up, finishing third in his first race of the season.  Quinn Hampson, another ninth-grader, was right behind Cullinane in fourth place.  Chris Thagard ’20 completed Deerfield’s winning top-5 by capturing eigth place overall.  Then the ninth-grade tsunami resumed: Gabe Zaccheo ’22 (11th place), Chase Cherewatti ’22 (13th place), Giles Gordon ’22 (24th), and Ahmed El Wabory ’22 (31st place) all ran terrific debut races on a challenging course.  Other first-time racers included Phillips He ’21 (38th place), Jack de Bruyn Kops ’21 (50th place), and Holden Woodward ’22 (96th place).  Congratulations to all the Big Green harriers who completed their first official race on Saturday—the depth and youth on display was awesome!

With three invitationals in the books, Deerfield’s runners turn their attention to the dual meet portion of the season.  First up is St. Paul’s School, who will visit Deerfield next Saturday, October 6th for the first of two consecutive home meets.  Assuming the rain abates and the leaves start to turn, there should be some beautiful afternoons ahead for the Big Green. 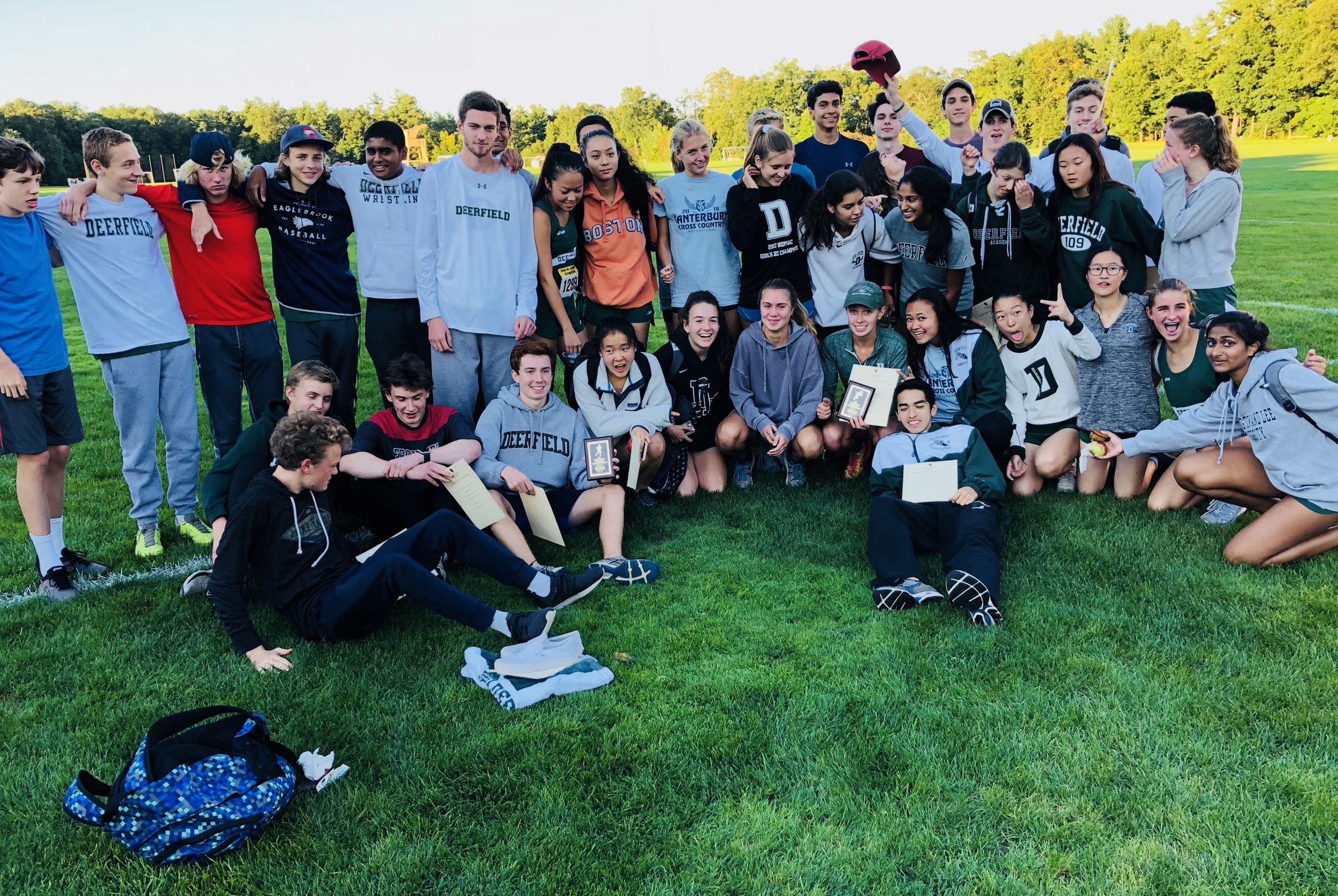