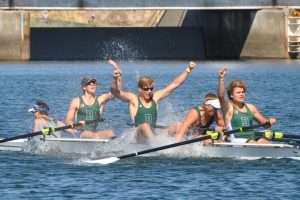 In the wake of the COVID-19 pandemic, the USRowing Youth National Championship originally scheduled for last weekend shifted their national event to a virtual championship with 1,134 athletes and 415 crews from 119 teams competing for medals in 42 events.

The Big Green boys crew team decided to shift their remote spring training in preparation for entering the virtual championship; entering two crews into the Northeast Regional Qualifier during the week of May 15. From the qualifying event, two Deerfield crews earned bids to compete at the Virtual National Championship.

As explained by Coach Washburn; In a similar format to past National Championship events, athletes would form “boats” and enter into different age and boat class events.  During the week leading up to May 15, these “boats” would compete in one of seven regional qualifying events by rowing 2000 meters on an indoor rowing machine (ergometer) and submitting their time.  The average time for the “boat” would then be compared to other “boats” in each event to determine the final order.  Crews who placed highly enough would qualify to compete at the National Championships in June.

At the Northeast Regional, the men’s U17 2x/2- entry of John Patton ’23 and Oscar Patton ’23 finished in the top spot. In the Mens Youth 4+/4X/4- (Weight Adjusted) event, the crew of Skye Bacon ’20, Tommy Gilmore ’20 (co-captain), Hayden McGuinness ’20, and Jimmy Patton ’20 (co-captain) narrowly missed earning the gold, finishing second, just 1.15 seconds behind the first place finishers. With these performances, these crews earned a berth to the Virtual National Championship which took place last week.

Last week, these two Deerfield “boats” once again rowed 2000 meters on the ergometer and submitted their times. Yesterday, USRowing announced the winners. The Big Green crew of John Patton and Oscar Patton won the Men’s U17 2-/2x event and earned gold!

In the Men’s Youth 4+/4x/4- (weight adjusted) class the “boat” of Jimmy Patton, Tommy Gilmore, Hayden McGuinness, and Skye Bacon earned the national bronze medal with a time of 6:16.89.

Congratulations to the team on their virtual season and earning medal finishes at the USRowing Virtual National Championship!