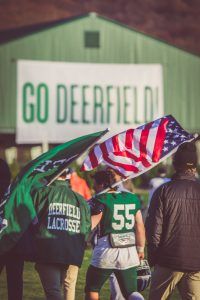 In this week’s, games of the week, we feature a couple of victorious Choate Days for Deerfield. We go back to Saturday, November 11, 2017, when Deerfield hosted Choate Day; on this day, Deerfield teams posted a record of 6-3-3. Fast forward to the fall of 2018, Deerfield teams traveled to Wallingford, CT to post a 5-5-1 overall record. This past fall, competing back at home in the Pioneer Valley, it was again another victorious Choate Day for the Big Green, posting an 8-3-1 record.

We travel back in time to the fall 2017 Choate Day for the first games in this week’s edition of games of the week. The Big Green was led by wins from the varsity and JV field hockey, boys Jr. A and varsity soccer, and girls thirds soccer. The biggest win on the day came from the girls varsity soccer team who miraculously upset Choate by a score of 4-3 in a historic game.

Saturday marked another great day for the annual Deerfield-Choate rivalry. With the support from family, friends, alumni and fellow students, the Deerfield athletic teams went 6-3-3 on the day. 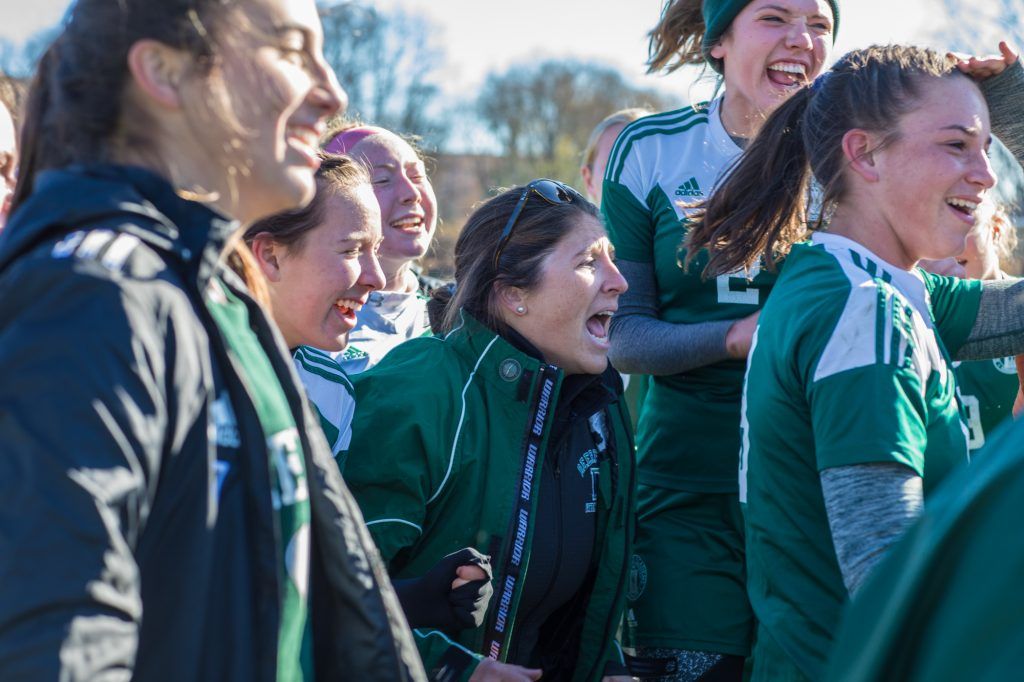 Other DA wins consisted of Boys Junior A soccer defeating the Wild Boars by a score of 3-1, JV field hockey with a close 1-0 win and girls reserve soccer notching a 3-1 victory. Saturday also featured many evenly matched games as JV football tied 8-8 and both girls and boys JV soccer finished with 0-0 ties. Despite Deerfield’s best efforts, Choate was able to pull off victories in the varsity and JV volleyball games and the varsity football game. Although varsity football lost, they were able to hold the explosive Choate offense to the fewest amount of points they’ve scored in a game this season with 28.

The Deerfield Athletic Department would like to thank parents, alumni and fans for coming out to support our Deerfield teams on the special day.

Congratulations to all student-athletes on a successful Choate Day and a great overall fall season!

Last Saturday, which was unusually cold but sunny, Deerfield and Choate squared off for the 95th time. This annual rivalry brings out the best in school spirit, and at the same time, brings the fall athletic season to a close. In 1922 it was just a football game. Then in 1938 soccer was added. Ten years later, in 1948, the schools competed with one another in football, soccer, and cross country. Girls’ athletic contests were added in 1990 after Deerfield’s return to coeducation. And this year Choate Day involved 12 different contests; it was a great day for Deerfield Athletics—what follows is the day’s tally of wins and losses.

Off campus, the boys and girls cross country teams competed at the New England Preparatory School Athletic Council (NEPSAC) Division One Cross Country Championships, which, ironically, were held at Choate. Our girls’ team won the title by a comfortable margin, giving Coach Cullinane and his team their first New England title in several years. The boys’ team ran well and came away with a seventh place finish. Competition between third and eighth place in the boys’ race was fierce! Both teams can be very proud of their successful seasons.

Earlier in the week our boys water polo team earned their spot in a post-season tournament, and on Wednesday they travelled to Loomis for their play-in game. It was fourth-ranked Loomis against fifth-ranked Deerfield, and the winner would advance to the “Liquid Four” on Saturday. We lost the game, but overall this team had a great season, too.

Back at Deerfield, our teams all played hard and were superb representatives of the school. Ultimately, Deerfield won the day, outscoring Choate with six wins, three losses, and three ties. This was the best tally we’ve seen in years, and I’m hopeful that we’ll see more of the same in the years ahead!

Boys and girls varsity soccer had the most dramatic wins of the day. Both faced tough Choate teams with post season plans already made. The boys led throughout game and won 4-2, while the girls gave up a goal in the first minute before bouncing back to take a 2-1 lead at the half. They traded goals with Choate the rest of the way, and with time running out came away with a 4-3 victory!

The varsity and junior varsity field hockey teams took care of business, 4-0 and 1-0, respectively. Both of these teams had strong seasons, and it was great to see them play some of their best field hockey on the last day of the season.

JV and thirds boys and girls soccer teams held a combined 2-0-2 record against their Choate opponents. With games staggered throughout the late morning and afternoon, our students got the chance to see many of their classmates play, and the action on the junior varsity and thirds fields was impressive! Our two junior varsity teams tied, while the boys and girls thirds teams both won by a score of 3-1.

Varsity football and our two volleyball teams fell to strong and deep Choate teams; the JV football game ended in a tie with the rather unusual score of 8-8. Varsity and JV volleyball had their best week of the season coming into the Choate games. With victories over Northfield Mount Hermon on Monday, and great matches with St. Paul’s on Wednesday, both teams felt confident going into the weekend. However, the day belonged to Choate both on the volleyball court and the football field. Choate was favored to win varsity football, having held their opponents to single digit numbers throughout the season. We kept the score close early on and played an outstanding game all afternoon. Later in the day we learned that Deerfield had earned its first Bowl invitation in over 15 years: We will play in the Mike Atkins Bowl this Saturday, November 18, at 1:00 pm vs. Trinity-Pawling. Congratulations, team!

Overall, Choate Weekend was a great success for our coaches and their teams. What made it an even greater success was the loyal support from alumni, parents, and friends who returned to campus to be a part of the festivities. I want to thank our alumni in particular for their positive and joyful presence on campus as we cheered for the Green and White and reconnected. They were so much fun to be around, and current students sensed that and enjoyed the camaraderie as well!

Well done, alums. I hope you always find the road back to campus! – Bob Howe

When You Bleed Green
2017 Pep Rally Poem by Bob Howe

When you decided to come to school in the Pioneer Valley
You probably didn’t know about this big Choate Day rally
For 95 years, since the year 1922</em
That’s when your grandparent’s parents were the same age as you
Big Green and the Boars have made this day great.
It’s all about school pride and big wins, and it’s not about hate.
Our alums flock back to their school, they really care about you and this place.
I’m amazed by their loyalty, and we welcome them back into our space.
Being a part of Choate Day is much bigger than just you.
You’ve entered a rite of passage that so few get to do.
The bonfire, night rides, banners and chananagins
Will stoke all the teams to go get us some wins!
Did you see Donnie Sparks jump the stage here on Wednesday?
That’s how you’ve got to be on our fields the whole day!
I’m so proud of our school, and I’ll leave you with this quote;
Love our school, cheer our teams and let’s go beat Choate!!

Finally, most recently, fall 2019 was a victorious and beautiful day for the Big Green. The varsity volleyball team kicked off the day in ‘The Barn’ with a thrilling 3-2 victory over the Wild Boars and concluded with a fourth down goal line stand by the varsity football team to defeat arch-rival Choate 20-14. At the final whistle, Jim Smith field was flooded by Deerfield students, alumni/alumnae, and their families rallying together to singing, “Deerfield! Go onward marching…!”

Choate Day 2019 in the Pioneer Valley was marked with clear sunny skies, brisk temperatures, and victories for the Big Green! Deerfield teams were victorious over rival Choate Rosemary Hall in the annual Deerfield-Choate head-to-head day of competition. With the support from family, friends, alumni/ae and fellow students, Deerfield teams posted an overall record of 8-3-1 on the day.

Other Deerfield wins included boys JV soccer team defeating the Wild Boards 2-1 and boys Jr. A soccer shutting out their rival 5-0. The girls thirds soccer team also earned a shutout winning 5-0 over the Wild Boars to capture their tenth win of the season. The boys varsity soccer team tied Choate for the second straight year, at the final whistle the score was 1-1.

In the varsity football game – the final game of the day – the Big Green defeated the Wild Boars for the first time since 2008 by a score of 20-14. Leading 20-14 midway through the fourth quarter, the Deerfield defense made a goal line stand with two minutes remaining in the game to seal the victory. Following the defensive stop, the offense earned two consecutive first downs and were able to run out the clock to close the game. At the final whistle, the Deerfield community charged the field to celebrate the momentous

Choate Day 2019 concluded with the community rallying together on Jim Smith Field singing, “Deerfield! Go onward marching…!” A perfect ending to an epic and historic day.

Congratulations to the Deerfield student-athletes and community on a successful Choate Day 2019! Now, it is on to the post-season for volleyball, field hockey, and football!