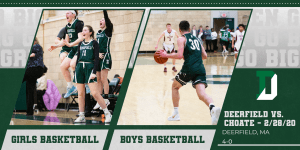 In this week’s Games of the Week, we highlight the Deerfield girls and boys varsity basketball teams who swept Choate in their season finale games.

At the end of the first quarter, the girls varsity basketball team trailed the visiting Wild Boars, 12-14, but held their opponent to only five points in the second quarter to gain the 28-19 advantage at halftime.

In the second half, the Big Green continued making their shots and working tirelessly defensively posting a second half score of 29-20 to secure the 57-39 win.

This meeting between the two rival teams, marked third meeting and third win for the Big Green over the Wild Boars this season. Prior to the final regular season game, the Doors defeated Choate on December 20, 2019 in the semifinals of the Deerfield Holiday Tournament (72-63) and they met again on February 22, 2020 in the Eight Schools Girls Basketball Tournament hosted by NMH, again the Big Green downed their rival, 50-31.

With Deerfield fans racing between the two gyms during the two games, the boys JV basketball team was also successful on both ends of the court, upending Choate 50-27 in the final game of their regular season, posting an overall season record of 10-7.

In the next slate of games, the girls JV basketball team extended their winning season by defeating the Wild Boars, 34-15 and furthering their season record to 11-2 thanks to the leadership of the four seniors on their roster.

For the second game of the night in the Class of 1953 Gym, the boys varsity basketball team posted a 55.3% scoring average on their way to victory over the Wild Boars in their final game of the season.

Connor Printz ’20 posted 20 points in the game to lead the Big Green scoring. He was followed on the score sheet by classmates Ben Diffley ’20 (15 points) and Deandre Ortiz ’20 (12 points). Bennett Pitcher ’21 and James Steinberger ’20 each registered 11 points and Thomas Lu ’22 rounded out the night’s scoring with five points.

At the end of the first quarter the Big Green held a double digit point lead over Choate, 40-19. Propelled by the boisterous Big Green crowd that packed the stands, in the second half the team continued to extend their lead by registering another 34 points in the second half to secure the 74-46 win, the team’s biggest and most commanding win of the 2019-2020 season. Saving the best for last!

With the boys and girls varsity and JV teams earning wins Friday, February 28 against the visiting Wild Boars, the Big Green earned the sweep over rival Choate! A great way for Deerfield basketball to close out the 2019-2020 regular season.