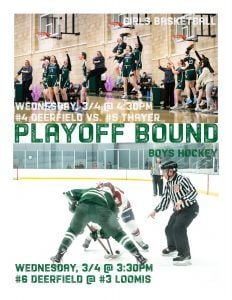 For the second consecutive year both the Deerfield girls basketball and boys hockey team are playoff bound.

The girls basketball team defeated Choate Rosemary Hall on Friday night in front of the home Deerfield crowd in their final game of the regular season, marking the third time the girls basketball team has defeated rival Choate this season.  With the win, the team posted a 16-4-0 regular season record and earned the fourth seed in the 2020 NEPSAC Girls Basketball Class A Championship Tournament. The #4 Big Green will host #5 Thayer (12-13-0) this Wednesday, March 4 at 4:30pm in the opening round game. You can tune in to watch Wednesday’s game on livestream. If the team advances to the semifinal round, they will face the winner of #1 Marianapolis and #8 Choate on Saturday, March 7 at the Rappaport Gymnasium. Good luck!

Winning their final four games of the regular season to improve their season record to 12-9, the boys varsity hockey team earned the sixth seed in the 2020 NEPSAC Boys Ice Hockey Tournament Martin/Earl (Large) Bracket. In the opening quarterfinal game, the Big Green will travel down I-91 to take on #3 Loomis this Wednesday, March 4 at 3:30pm. This season, the Big Green hold a 2-0 advantage in their home-and-away series with the Pelicans. With a win in the quarterfinal round, the Big Green would face the winner of the #2 Brunswick vs. #7 Milton quarterfinal. Tune in to watch Wednesday’s game on Loomis’ livestream. Good luck!