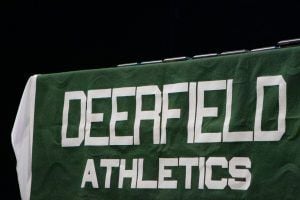 Yesterday morning at School Meeting, the Deerfield community celebrated our winter teams and honored our winter varsity and sub-varsity award winners. In addition to celebrating the accomplishments of our winter teams, there were well wishes shared as many winter teams are still competing and there are still several winter contests and championships to be played and accolades to be garnered. Congratulations and good luck Deerfield teams!

In keeping with tradition, Mr. Howe shared his Winter Top-10 with the audience, although this term it was shared with a unique twist and was poetically presented by Deerfield student Atang Peloewetse ’20.

It’s now late into February and the days grow long,
Our seasons are winding down and the teams have been strong.
The winter of 2019-2020 has been special to so many of you here
So many memories and good times had by seniors in their graduating year.
Senior athletes who bounce balls, shoot pucks, or swim laps while watching a clock
And others in snow, on mats, or in courts all know but will feel quite the shock
When in just a few days high school winters become a piece of your past
Underclassmen be aware these years do go by too fast!
Let’s start the top 10 with people you all know
These three keep us safe and help get us back in the flow
Mr. Graves, Ms. Parker and Ms. Biscottini have the talent and never rest
Along with them are Emma and Tom in fitness who we know to be two of the best!
At 9, boys and girls hockey come into this week fighting for a playoff space
Devereaux, Halloran and Mikesell lead the girls AND Davenport, Robert and Doheny direct their team’s race.
These seniors on both teams have led with their heart, effort and skills.
These teams are in the mix at position nine giving us all some games with big thrills.
Two JV teams vie this week for the best JV record to date
With a couple of games left it’s clear they both earn their place at 8
Girls JV basketball has had a season to remember as they get ready for Choate this Friday night.
Girls JV squash can earn their place with a win today over Choate. Let’s hope I’m right!!
Finishing strong is what every team and coach wants in the end
With 7 seniors, boys’ basketball hopes to make their winning a trend
With games this week against Andover and Choate this team can go out on top
At seven – this team has the character so we know they won’t stop!
At 6 we look to boys and girls squash who finished well at the Nationals competition
Their seasons combined record of 22-5 shows they don’t rely on luck and superstition.
Only 2 seniors are present on these two rosters this winter – which is exciting in itself
Griffin Dewey and Jackson Rother will be missed; they can both be described as top shelf!
Next up at 5 are two teams we love to go and support
Their long hours of training and mental toughness in an endurance sport
Speed, technique and talent makes these seniors stand out to me
Addie, Cyrus, Mason, Teddy, Thatcher, Izzy, Izzy, Maggie, Morgan, Nafi, and Nikita
Congrats to all swimmers in the class of 2020.
There are some people who play on teams here that I’ll always want them here more.
Their contributions to program culture and teams put them all at number 4
Chris Thagard, Elliot Flagg, John Chung, Kikka Guidici, Samara Cummings are just a few that come to mind.
These students and so many others have shown leadership through strength while being kind.
Number 3 goes to girls’ basketball for having their best season in years.
They’ve won many games this year bringing both their fans and opponents to tears.
Winner of their Holiday Classic and staying with their “all-in- all out” theme
These athletes have shown brightly, and have made their coaches beam.
The alpine skiers take the almost top spot
They do this because they continue to win a lot.
This year it’s the boys’ team who managed to win the Class A Championship race
Another championship for this program, another New England first place!
We have someone at our school that gets the nod at being number 1.
This person started out small and tried a new sport to see what they could get done.
A couple of years go by and the results don’t surprise either me or you
We love this athlete: this person is Angela Osei-Ampadu
New England Champion and a National third place
She stepped into a challenge and crushed it into space.
Congratulations to all teams! I am proud of how you always look to do more.
You represent the best and you make a great Deerfield Door!

Awarded to that member of the varsity wrestling team who in the opinion of the team and coaches was outstanding in leadership, sportsmanship, and ability.

For that player who manifests the spirit of Robin Keller and Katie Birrell, Class of 1992. They led by example and played with intensity, courage, and passion.

To that senior who in the opinion of the players and coaches contributed most to the spirit and excellence of Deerfield hockey.

To that member of the Deerfield Ski Team who has a genuine concern for the ski program’s success and who has similarly shown a loyalty to the concept of team skiing.

To that Deerfield Skier who has exemplified the qualities of Doug Parker, a skier who developed collegiate ability through his dedication to the sport, a dedication derived not for fame but rather from a personal search to find his maximum ability. To Doug Parker success did not necessarily mean good results; it meant skiing the best he could.

In memory of Bruce Bayne ’44. To that player who exemplifies the qualities Bruce Bayne ’44 brought to the game of squash while at Deerfield.  His championship qualities of natural talent, sportsmanship, leadership and the will to be the best are what the game of squash is all about. The recipient of this award should be proud of and build on her accomplishments in squash and in life

Awards to be given at the conclusion of their season.

Awards to be given at the conclusion of their season.

Visit Vidigami to view the photo album from the Awards Ceremony.