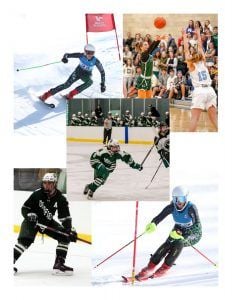 In the lone varsity home game, the girls varsity hockey team led the way by defeating visiting Winchendon, 2-1 and avenged their early season loss to the Wapiti. In a physical game, the Big Green maintained their composure through the final whistle. Haley Sundstrum ’21 opened the scoring off of a rebound of a Keri Clougherty ’21 shot (Sara Ito-Bagshaw ’22 also earned an assist), and Ellia Chiang ’21 scored the winning goal on a hard drive to goal (assists to Sydney Cresta ’20 and Jackson Kinsler ’22). Emma Tennant ’21 was once again solid in goal for the Big Green. Up next, the team will face a strong Westminster squad on Wednesday, 2/12. In the final month of the regular season, the Big Green are 8-10-1.

The boys varsity hockey team traveled to Andover for their second meeting of the season against the Big Blue. Earlier this season at the Flood-Marr Tournament the Big Green edged Andover 3-1 to secure a 5th place finish at the tournament. The Big Green pulled ahead to a 2-0 lead on a second period goal from Alton Machen (assists to Eamon Doheny and Will Holland) and opened the third period on a goal by Alex Robert (assists to Jarod Harrington and Eamon Doheny). The Big Blue equalized in the third period, registering two goals of their own and sending the game into overtime. With ten seconds remaining in the OT period, Alton Machen scored his second goal of the game (assists to Jake Higgins and Alex Robert), propelling the Big Green to a thrilling 3-2 OT victory on the road. With the win, the Big Green improve to 7-7-4 overall. The Big Green return home on Wednesday, 2/12 to face-off against Loomis for the second time this season. To open their 2020 schedule, Deerfield defeated Loomis on the road 5-1.

The girls varsity basketball team traveled to Kimball Union Academy on Wednesday to battle the Wildcats. In an exciting back-and-forth game the Big Green pulled ahead of the Wildcats in the final frame and although the Wildcats were hitting their shots at the end of the game, the Big Green hit their shots at the free throw line to preserve their lead and the 78-70 victory. With their 11th victory of the season, the Big Green have already matched their number of wins from 2018-2019. Their current record is 11-2 and return to action on Wednesday at Suffield.

In their fourth Mount Institute Ski League race of the season, both the Big Green boys and girls varsity alpine skiing teams were victorious, capturing first place finishes. The girls team tied NMH for first place (222 points). The team was led by Kikka Giudici, who captured first place overall. She was followed by teammates, Claire Patton (4th), Chloe Monty (6th), and Madeline Carey (7th). On the boys side, the team earned 240 points for the win. The Deerfield skiers finished in a pack, ranking from second to sixth place overall – Granger Savage (2nd), Alexander Grosse (3rd), Tait Kline (4th), Achille Sarachek (5th), and Nick Baker (6th). The ski teams will now shift their focus to the upcoming NEPSAC Class A Championships on Wednesday, 2/12 at Sunday River.