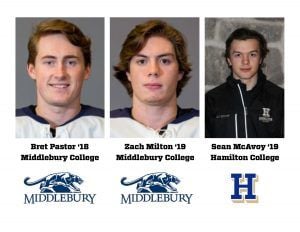 On Saturday, February 22, Hamilton (11-9-4) faced off against Middlebury (10-11-3) in the last game of the regular season before the NESCAC playoffs. This game was a heavily weighted game; the outcome could determine home seeding for the NESCAC Championship Tournament quarterfinals for Middlebury who was closing in on 4th place in the standings. This game not only had important playoff implications, but there were three Deerfield Alumni – Bret Pastor ’18, Zach Milton ’19 and Sean McAvoy ’19 – between the two teams.

Sean McAvoy ’19 has suited up in three games for the Continentals in his freshman season; his first game for the Continentals was against SUNY Canton, and he logged a shot in each of his games against SUNY Cortland and Skidmore. While at Deerfield, McAvoy had an impressive four-year career, garnering 21 goals and 34 assists in his time for the Doors for an impressive 55 career points. He also captained the team his senior year.

On the opposing bench, playing for Middlebury, sophomore Bret Pastor ’18, has played in all 24 games this season as a defenseman; scoring 1 goal and 9 assists, for 10 total points, doubling his freshman year stats of 1 goal and 4 assists for 5 points. During his four years at DA, Pastor was equally successful, earning 21 career points off of 5 goals and 16 assists, and captained the team in his senior year.

Also competing for the Middlebury Panthers is Zach Milton ’19 who has yet to crack the line up, but with an impressive PG year at Deerfield with 4 goals and 6 assists for 10 points, and an equally strong four-year career at Roxbury Latin (32 career points), good things are sure to come!

At the final whistle of this NESCAC contest, Middlebury blanked the visiting Continentals, 6-0 to clinch the fourth seed in the NESCAC standings and a home playoff spot.

Hamilton will host Bowdoin in the quarterfinals of the NESCAC Championship Tournament on February 29 after finishing in third place in the conference standings to earn the third seed for the championship.

Closing out their season on a two-game winning streak, the Panthers secured the fourth seed and a NESCAC Championship Tournament quarterfinal home game against Wesleyan on February 29.

We wish all three good luck in the upcoming playoffs!