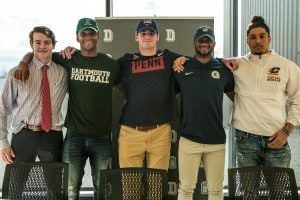 At the College of the Holy Cross, Jake Higgins will join former Deerfield hockey player Mary Edmonds ’19 who is in her rookie season for the Crusaders women’s ice hockey team.

We look forward to supporting you all and watching you grow at the next level! Good luck!

Read more below on each of these student-athletes;

Sam Carlson ’20 – University of Pennsylvania (Football)
For his post-graduate year, tight end and middle linebacker Sam Carlson has been a valuable asset to the Big Green. Hailing from Mill Valley, California, Sam was a three-year varsity starter for both Novato High School and Tamalpais High School. During his junior year, Sam recorded 22 sacks, ranking third in California. In 2017 he was also selected for 1st Team All League for defensive end. Following his achievements, in his senior year, Sam was selected for 1st Team All League for linebacker. Upon his arrival to Deerfield, Sam contributed to a fantastic 8-2 football season, and was chosen for 1st Team All NEPSAC for tight end and linebacker and was Defensive Player of the Year for CNE. Sam is also looking forward to a successful spring with the Deerfield lacrosse team. Prior to Deerfield, he played both midfield and attack for Novato and Tamalpais. In 2017 and 2018, he was chosen for the 1st Team All League. Next fall, Sam will join the University of Pennsylvania football program. Good luck Sam!

Noah Jones ’20 – Georgetown University (Football)
A post-graduate from Evanston, IL, Noah Jones has been a powerhouse on the football field. Despite missing the first eight games of his junior season at Loyola Academy High School, he was able to come back for the next four and to record four touchdowns and over 400 yards, recording two touchdowns and over 100 yards against home town rival, New Trier. In the Illinois state championship, Noah led his team with 135 yards and 8 catches, receiving recognition in the the Chicago Sun Times. During his senior year, his team claimed another state championship.
During his 16 game career at Loyola, Noah recorded nearly 1,000 yards and 10 touchdowns. Noah also played for nationally renowned 7v7 team, Midwest Boom, only the second freshman in program history to make the U18 team. Noah helped his team to two 7v7 national championships. At Deerfield, Noah had a very successful post-graduate campaign. He contributed heavily on offense and helped Deerfield to their first win in 10 years against Choate. He then played his best game of the season in the Mike Silipo Bowl against Milton Academy, recording eight catches for close to 150 yards. For his contributions, Noah was awarded the game ball. Noah got 2nd Team All CNEFL honors and All NEPSAC honorable mentions. Next fall, Noah be joining the Gerogetown Hoyas football program. Best of luck, Noah!

Marcus Romboli ’20 – Central Michigan University (Football)
Marcus had a fantastic time during his second year playing for Deerfield. He arrived as a junior playing a new position, but that proved to be no obstacle, making 2nd Team All NEPSAC as an offensive lineman for his 2018-19 season. As a senior, Marcus returned to his main position as a defensive end, putting up twelve sacks in 8 games. He received NEPSAC honorable mention recognition for his last season with the Big Green. Prior to Deerfield, Marcus played for Everett High School and Malden Catholic High School. As a freshman he played four games on Everett’s varsity team, and continued his varsity football career at Malden, starting every game as a sophomore. Marcus had a standout junior year at Malden Catholic, leading his team in tackles, force fumbles, and sacks. The 2017-18 Malden Catholic football team went on to play in one playoff game. For his contributions on the field, Marcus was named a Catholic Conference All Star. Marcus is looking forward to spending the next four years in Mount Pleasant, Michigan playing for Central Michigan University. Go Chippewas!

Leonard St. Gourdin ’20 – Dartmouth College (Football)
A post-graduate student-athlete from Malden, Massachutesetts, Leonard has been a help to both the Big Green’s offense and defense production. He was a consistent force as a safety and for his contributions this season, Leonard was selected for 1st Team All NEPSAC. Prior to Deerfield, Leonard was a tri-varsity athlete at Malden Catholic High School, making a constant impact on the MCHS football, basketball, and track teams. For his senior year, Leonard led the Malden Catholic Varsity football team as captain through a tough senior season, turning it around with a 8-2 season for his Deerfield post-graduate year. During his senior season he was also selected as the Boston Globe Week 3 Player of the Week and the 2018-19 MVP at MCHS. Leonard is excited to attend Dartmouth College in the fall. The Dartmouth football team, under the leadership of Head Coach Buddy Teevens ‘74, finished their 2019 season with a strong 9-1 record.
Good luck Leonard!

Jake Higgins ’20 – College of the Holy Cross (Men’s Ice Hockey)
Jake joined the Big Green in the fall of 2019 as a post-graduate student-athlete after a stellar hockey career at Hingham High School. With the Harbormen, Jake made four consecutive appearances in the Super 8 of the Massachusetts High School Hockey Division I. In his senior campaign the 6’2 defenseman captained the Harbormen and tallied seven goals and 25 assists and was a two-time Patriot Ledger All-Scholastic in hockey. After hockey season, Jake was a captain for the Harbormen’s top-ranked lacrosse team. This season, playing in all 17 games for the Big Green, Jake has anchored the team’s defense while also contributing in the offensive zone, registering eight points on two goals and six assists. With eight regular season games remaining in Deerfield boys varsity hockey game schedule, Jake is currently tied for team’s second highest scoring defenseman. Next year, Jake will join the Holy Cross men’s ice hockey program who compete in the Atlantic Hockey conference. Go Crusaders!

Visit Vidigami to view all of the NLI signing photos.

We will host another celebration in May to congratulate more of our collegiate bound student-athletes.