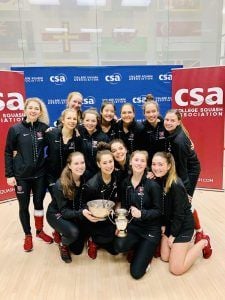 Congratulations to Maddie Chai ’17, Harbour Woodward ’19 and the Harvard Women’s Squash team on winning the 2020 Howe Cup and being crowned national champions for the fifth-straight year.

The championship win for Harvard resulted in the team’s 83rd consecutive victory. WOW!

In her junior year for the Crimson, Maddie has competed in the third through sixth spot, posting an overall season record of 15-2. With 15 wins this season, she is tied for third most-wins on the team.

Harbour, in her rookie season competing for the Crimson, played in the ninth spot and went 3-0.