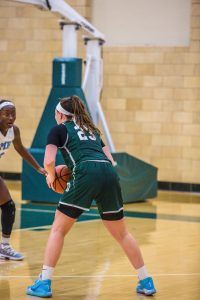 The girls varsity basketball team jumped ahead to an early 41-18 first half lead over visiting Hotchkiss, propelling the Big Green to a 58-40 win over the Bearcats.

Angie Czeremcha ’21 led the Big Green’s scoring in Saturday’s game by registering almost half of the team’s points with 27. In addition to her scoring power, Angie was a presence in the paint on both ends of the court pulling in 10 rebounds in the game which included five offensive and defensive rebounds.

Fellow classmate, Claire Cummings ’21 also scored in the double digits on Saturday, producing 13 points for the Big Green and pulling down six defensive rebounds. Katy Gilbert ’20 quickly followed on the statistics sheet bringing in five rebounds of her own and scoring two points in the game.

Saturday’s win pushes the Big Green ahead to a 10-2 season record. With six regular season games left to play, the team is one win away from matching the number of wins achieved in the 2018-2019 season.

The Big Green return to the court tomorrow, Wednesday, 2/5 at 4:00pm on the road at Kimball Union.

Tune in to watch KUA’s livestream of the game.