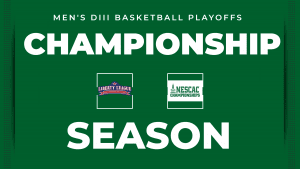 Nick Osarenren ‘18 and the Hamilton College Continentals finished the season on Saturday February 22nd in the NESCAC Quarterfinals with a 83-66 loss to Tufts University. Despite the loss, Tufts had a strong season, with a 16-9 record and finished 8th in the NESCAC standings. Nick helped the Continentals to their success, playing in 25 games, with 1 start, averaging 22.5 minutes per game, and 6.3 points per game. Hamilton has gone to the playoffs in both Nick’s freshman and sophomore seasons. Congratulations on your season Nick! Looking forward to cheering you on during your junior campaign.

Jackson Pitcher ’19 and the Middlebury College Panthers also finished their season in the NESCAC quarterfinals this past Saturday, with a 100-82 loss to Trinity. The Panthers finished the season ranked 5th in the NESCAC standings, with a 20-5 record. Middlebury entered the tournament for the fifth year in a row, and is the 5th seed for the second time in three years. Jackson contributed to Middlebury’s success in his freshman year by playing in 7 games. A successful season for Jackson and the Panthers!

Finally, Billy Lahart ’17 and the Bates College Bobcats competed as the 7th seed in an incredibly close loss to Colby 102-94, after three overtimes. Ranked 12th nationally, Colby was unable to get the edge on Bates for much of the game, but kept it tight, and was finally able to win on a few key free throws in the final minutes of the third overtime. Bates finished the season with a 12-13 record, and improved upon last season where they were unable to clinch a playoff spot. Billy had a career high 7 games in his junior season, for a total of 41 minutes and 6 points. We wish Billy and the Bobcats success next season in his senior campaign.

In the Liberty League, things are shaping up for Union College and Junior forward Jackson Mannix ’17. Union is seeded 4th in the Liberty League standings, earning them home court advantage for the Quarterfinals against Vasser tonight, February 25th. With a strong 15-9 record, and a 12-6 record in the Liberty League, Union is ready to play. This would be their third Liberty League Tournament Championship in four years – an impressive feat! Union has been really impressive at home this season, winning nine of their eleven home games. Jackson has contributed to their success in his junior season – playing in 22 games, and starting in 20, averaging 27.8 minutes per game, and 12.5 points per game, with 611 total minutes played this season. We wish Jackson and the Dutchmen good luck tonight!