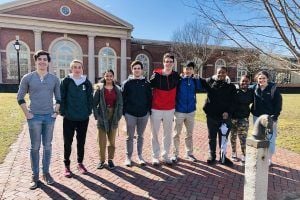 Congratulations to this week’s Athletes of the Week and Mr. Grimm, who made a guest appearance in this week’s photo!

This week’s athlete of the week is post-graduate guard Raegan Hickey.  Raegan is a fierce competitor who really turns it up a notch when the competition gets tough.  She uses her speed and fearlessness to her advantage, often driving into the lane against much bigger players.  She knows what it means to work hard and focus on winning, and she has been an unstoppable force in so many of our wins this season.  She sets an excellent example for her younger teammates through her knowledge of the game and desire to improve every day.

Rob Sawyers won all of his matches at the nationals: Milton,  Kent, Avon and Belmont Hill.

The Athlete of the Week for Girls’ Varsity Hockey is Emma Tennant. Emma as a new junior has found immediate success in the net for us, and has proven to be someone we can rely on. We are lucky to add her to our already strong goalie roster. In every game she’s played in, she’s made big saves, but this was especially evident in our game against Cushing. Though we didn’t win, Emma kept us in the game whenever we made any defensive errors. She saved two huge breakaway shots, including one where there was two subsequent rebounds, all by herself! Both the bench and crowd went crazy. Thanks to Emma’s steady presence in net, we had a good chance at winning. We look forward to the last week of the season with her and to some more big saves when we need them!

The JV Swim Team is proud to select Jennie Hazlewood as athlete of the week.  After overcoming a bout of nausea and an injury, Jennie swam to season best times in the 100 freestyle and 50 backstroke in the home meet against Bement and NMH.  Jennie’s determined focus and hard work throughout the season has resulted in improvements of 10 seconds in the 100 freestyle and 20 seconds in the 100 backstroke over the course of the season.

JV Swimming nominates Captain Janie Doyle as athlete of the week.  Throughout the season, Janie has distinguished herself as a hard worker in practice and last week was no exception.  Her positive attitude is evident in every set, where she never quits, no matter how challenging the work is.  Janie is a continual learner, willing to try new strategies in order to succeed.  She made big improvements in her 50 and 100 freestyle at the Nick Whyte Invitational.  Janie was 4th in the 50 freestyle at this very competitive meet.

The girls JV hockey AOTW is Hannah Roche ’21. Hannah is a strong, smart, and skilled hockey player. She took on a defensive role for us this season and has been consistently terrific in that role. She has prevented many goals and scored a few herself! We appreciate her work-ethic and consistency, and her teammates look up to her as a leader on the team. We look forward to her stellar play on the blue line next season and congratulate her on a fantastic job this winter!

Jarod Harrington is the BV Hockey athlete of the week. Jarod had two good games against Williston and Exeter. He has started to add a physical element to his game which is paying dividends on the stat sheet. Jarod is a great teammate who shows up and works hard every day.

Raheme is the only senior on the team and has set a good example and provided solid leadership all season. Additionally, his game has also improved and he’s a dependable presence for us down low, playing great defense and developing into a legitimate offensive threat. Thanks for a great season Raheme!

The boys JV hockey would like to nominate three seniors to be their athletes of the week; Aidan Philie, Alex Leong and Alex Strait. These three seniors have been the backbone of the team for the past two seasons. Not only do they play the game at a high level and impact every game and practice they’re a part of, but they represent our school and program so well. These three love the game of hockey, love playing for Deerfield, and always give their teammates their best. For their years of play, sportsmanship, and consistent effort the coaches want to say thank you and have nominated you for this week’s athlete of the week.

For his fortitude and seriousness of purpose in practice and his consistent improvement over the course of the season, Hudson McGuinness is athlete of the week for Boys’ Varsity Swimming & Diving. In his first year as a member of the team, Hudson has proven himself to be unflappable and dedicated swimmer. He is always willing to challenge himself by tackling a faster interval in practice or swimming a new event in a meet. His races have demonstrated that hard work pays off. Since December, Hudson has dropped 5 seconds in the 200 Free and 12 seconds in the 500 Free! We commend Hudson for his steadfast commitment to his teammates and the sport. He is a wonderful addition to our program and we cannot wait to see what he will do at New England’s!

After two tough back to back loses our JV girls rebounded with a 31-15 victory over NMH. It’s our second victory over NMH this year, which is gratifying knowing that for decades NMH has dominated the victory column.

Everyone played well and made key contributions to our victory. However, Kiki Brainard played with tremendous court sense and her three 3 point baskets were devastating and kept NMH from becoming a threat. Kiki has had an outstanding season and is a natural leader on our team! Congratulation Kiki on a great game and a tremendous season!

Mia Calcano ´23 has grown tremendously as a basketball player. Mia is the only person who constantly smiles while she plays the game of basketball, and her positive attitude is infectious. More importantly, her confidence has grown since the beginning of the year. She took and made her first shot of the season this week against Stoneleigh. On the defensive end, she has quietly  become one of the team leaders in steals. Hesitant in the first game to enter the court, Mia is now always ready to play as we head into our final game of the season.

Grace has been a bright, buoying presence on our team all season. She combines high standards for herself with a dedication to the team. Her hard work and ability to overcome frustration has helped her vastly improve her squash skills and hold on to her spot on the ladder despite stiff competition from her talented teammates. She’s racked up a ton of wins in our matches, and her sunny attitude has helped build our great team chemistry. Grace’s past week was particularly impressive, as she was responsible for one of our three wins against Andover before turning around an hour later and beating the only Choate player who recorded a win against Andover. Then, at our final full-team practice, when everyone played everyone, Grace racked up the second-most points on anyone on the team. Grace has a bright future in Deerfield squash!