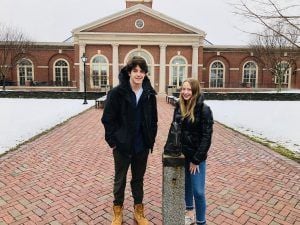 Antonia Ferero is selected as Athlete of the Week in JV swimming for her strong performances in the meet against Suffield.  Antonia swam to season best times in both the 50 Freestyle and the 100 Freestyle and then swam back-to-back events in the 100 Breaststroke and the the final 400 Free Relay where she anchored the relay in a repeat best time.

Julia Hioe is selected as Athlete of the Week in JV swimming for her strong efforts in the JV meet against Suffield.  Julia swam to a season best time in the 50 Backstroke and then happily tried her hand at a challenging new event this season, the 50 Butterfly.  Julia followed these events with solid back-to-back performances in the 200 Free Relay and the 100 Backstroke.

This week we would like to honor Evan Burkert for being one of the most spirited teammates and positive forces on our team.  Her ability to lift her teammates’ mood during pregame warm-ups, timeouts, halftime, and important plays during the game makes all the difference in keeping us focused, positive and together as a team.  She comes to practice every day ready to work hard, have fun, and push herself to get better.  She has a deadly elbow jumper and a quick drive to the basket from both left and right, making her tough to guard.  She routinely battles down low with Claire and Angie, which is no easy task!  Evan is an integral part of our team’s success, and we are so thankful to have her as a part of our squad.

Our Athlete of the Week is Haley Sundstrom. Haley has been a team-first player since her arrival to campus, and we have appreciated her work ethic and quiet intensity. Haley does whatever is needed of her for the team, and this year has stepped up when we needed her to into both a forward and a defensive role. Haley made the jump up to forward in our game against Winchendon, and immediately made an impact. She is a steady and stalwart presence in both zones, and does all the right things. This attitude led to her being in front of the net to score a beautiful goal that put Deerfield in the lead against Winchendon. We look forward to the rest of the year with Haley and her continued strong play!

For his unwavering determination in practice and his impressive effort over the LWW training trip, Robert Amundson is athlete of the week for Boys’ Varsity Swimming & Diving. Robert ended the three days of doubles’ practices with a stellar practice, pushing himself and his teammates to finish a rigorous endurance set of repeated 125s on a high note. Throughout the season, he has consistently modeled the practice mentality that swimmers need to reach the next level. Consequently, he has also improved his best times in nearly all the events this year. We look forward to seeing his drive and focus over training trip pay off in our upcoming dual meets.

The thirds girls basketball team’s player of the week is Sunshine Chen. Sunshine has been a true force of positivity on our team, beginning the year with limited experience with basketball but with a desire to learn and improve that has served her well – her improvement on the court has been wonderful to see! Sunshine can make shots that no one else can, she can defend in a surprising manner, and she does all of this with a smile on her face. Even when frustration would be understandable, Sunshine refuses to be brought down and instead looks ahead to how we can improve not just our game, but also our morale. Our team is very fortunate to have Sunshine!

As a player-coach, Jack took the initiative to break down film for us and worked with a bunch of the guys on positioning and systems after a few tough games. His insights are incredibly valuable and he has been working hard to serve as a conduit between players and coaches during the season. Jack has been a big part of this team’s success all season.

Zhexuan scored several key buckets in our game last week and has really upped his game over the course of the season.

Since the season began, Liv has been one of our strongest players and, in a sense, our mascot. Her combination of boundless joy, fierce competitiveness, and care for her team are the three qualities that define our squad. Liv came to the club as an accomplished tennis player with no experience with squash and has had to figure out which of her skills translate and which she has to build from scratch. Her powerful serves and rallies and her never-quit approach to every point have become must-watch viewing at our matches. But Liv shines even brighter off the court, where she’s always excited to help a teammate strategize in between games or stay late to score a match. Plus, nobody gets more amped up for spinning sessions or gets an earlier jump on Googling places for the team to eat on the road. Her jovial nature and team-first attitude have been contagious, and she’s a big reason we’ve been having so much fun this season.

With the team match score 3-3, Charles played a great match at number 3. Winning 3-0 to give the Big Green the team win!