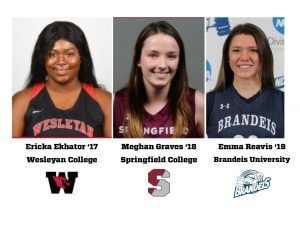 The Deerfield varsity girls’ basketball team has had a strong start to the season, currently posting a 9-1 record and captured the championship title of the Deerfield Girls Basketball Holiday Tournament in December. As the current Big Green team looks ahead to their next opponent, we highlight a trio of alumnae – Ericka Ekhator ’17, Meghan Graves ’18 and Emma Reavis ’19 – who have helped propel the current program success and who are continuing to excel on their respective collegiate teams.

Ericka Ekhator ’17 arrived at Deerfield in the fall of 2016 as a post-graduate student-athlete after a successful career at Middlesex School. Although sidelined with an injury at the start of her Deerfield career, she made an impact as a leader from the bench. As a post-player, she was a force to be reckoned with, and earned all-league honorable mention honors at the end of the season.

In the middle of her junior year with the Wesleyan Cardinals, Ericka has come off the bench in seven games and helped her team post a current 10-7 (1-3 conf.) record. She has averaged 1.7 points per game and 2.3 rebounds per game. Ericka and the Cardinals have recently posted back-to-back wins against Connecticut College and Suffolk.

Last season, the Cardinals advanced to the NESCAC quarterfinals and we look forward to hopefully seeing Ericka and the Cardinals in this year’s post-season.

Megan Graves ’18 and the Springfield College Pride are off to another strong season. Coming off an 18-10 record in 2019-2020, the Pride have continued to build on last season’s success, currently posting a 12-6 (3-0 conf.) record in the 2019-2020 season. Megan has been a solid presence for the Pride, playing in five games thus far and posting a 33.3 shooting percentage. In her freshman campaign, Megan played in five games and scored five points and two assists versus Mount Holyoke, setting a career record in both points and assists.

Megan had a strong four-year career at Deerfield, a four-year member of varsity basketball team, and captained the team in her junior and senior years. Megan was a three-time NEPSAC Basketball All-Star. In her senior campaign, Megan helped lead the team to the championship game in the New England Girls Basketball Classic Tournament, the first time since 2014 that the team had qualified for the championship team. As a point guard in her senior season, she averaged 8 points per game, and was a strong two-way player and leader for her team.

Currently, the Pride sit in the top spot in the NEWMAC standings and post-season play will tip-off at the end of February. Looking forward to continuing to support Meghan and the Pride throughout the season!

Emma Reavis ’19, another recent alumna of Deerfield, and teammate of Megan’s, has exploded onto the scene at Brandeis in her rookie season, starting in all 16 games thus far this season, averaging 21.9 minutes per game, and 6.9 points per game. She had a career high of 13 points and 7 assists against Salem State on November 26th, helping the Judges reach a strong 12-4 (2-3 conf.) record so far. Playing 351 minutes so far, and accumulating 58 assists, Emma has proven that she can make an impact for the Judges. Furthermore, she leads the team in steals per game, averaging of 1.7. A great start to her rookie season!

Emma was also a leader while at Deerfield, averaging 13.6 points per game her senior year as a guard. She was a three time NEPSAC All-Star, leading the team in all major statistical categories of points, rebounds, assists, and steals in both her junior and senior years. She also served as team captain in 2019. In her senior year, Emma helped lead the team to an 11-11 season record, and advanced to the NEPSAC Class A Championships semifinal game.

Good luck to Ericka, Meghan and Emma as they enter the final month of their regular season! We will be cheering  for you from Deerfield!