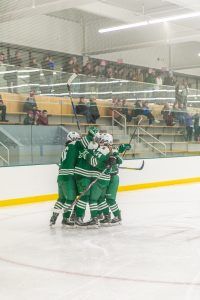 With yesterday’s win over rival Choate, the Deerfield girls varsity hockey team extended their current winning streak to three games. Prior to yesterday’s match-up, the Big Green earned back-to-back shutouts in their previous two games to ignite their current streak.

In front of a loud and supportive home cheering section, the Big Green took on rival Choate on Wednesday, 1/22. The Big Green jumped ahead to an early 1-0 lead in the first period when Ellia Chiang ’21 converted a feed from Jackson Kinsler ’22. In the second period, the Doors were confronted with several penalties and executed their penalty kill units successfully, preserving their 1-0 lead. It was in the third period, that the Big Green found the back of the net again and doubled their lead when Jackson Kinsler ’22 scored a goal of her own (assists to Chiang and Brianne Felice ’21). Chiang added another goal (assists to Keri Clougherty ’21 and CC Deslauriers ’23) to extend the lead to 3-0. Choate scored a goal of their own to cut the lead, but Clougherty quickly responded with an empty net goal (assist to Christina Halloran ’20) to secure the Big Green victory.

Last Wednesday, 1/15 the girls varsity hockey team kicked off their winning streak on the road defeating neighboring NMH, 3-0. Brianna Felice ‘21 opened the scoring on a redirection off of passes from Jackson Kinsler ‘22 and Diana Bishopp ‘23. Sydney Cresta ‘20 extended the lead (assists to Kailen Coelho ‘20 and Sara Robert ‘22), and Keri Clougherty ‘21 rounded out the scoring with a blast on the power play (assist to Cresta). Liv Mikesell ‘20 earned the shutout and win in goal.

The team recorded their second win and shutout in as many games on Saturday, 1/18 at Exeter. Sara Robert ‘22 opened the scoring with her first goal of the year off of a great pass from Sydney Cresta ‘20. In the second period, Christina Halloran ‘20 knocked a rebound out of mid-air for our second goal (Lisa Ito-Bagshaw ‘21 earned the assist), and Cresta completed the scoring off of a beautiful feed from Kailen Coelho ‘20. Keri Clougherty ‘21 and Aurora Devereaux ‘20 were excellent on defense, and Emma Tennant ‘21 was outstanding in goal to earn the shutout. At the final whistle the score was 3-0 for the Big Green!

With the three consecutive wins, the Big Green improve their season record to 5-8-1 and will return to action this Friday, January 24 when they host New Hampton. Puck drops at 6:30pm.

If you can’t make it to campus for the game, you can tune in to watch LIVE.