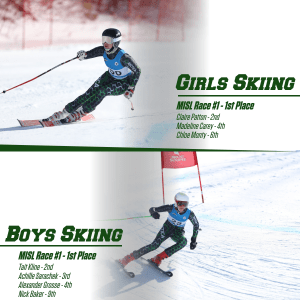 The boys and girls varsity skiing teams both finished in first place at their opening Mt. Institute Ski League races of the 2020 season on Wednesday, January 15.

The Deerfield girls team tallied 213 points ahead of second place NMH-B with 183 points and third place NMH-A (170) en route to the win. In the slalom event, Claire Patton ’22 led the way for the Big Green, finishing in second place with a combined score of 78.23 for her two runs on the day. Teammates, Madeline Carey ’20 and Chloe Monty ’20 finished in fourth and sixth place to help the Big Green earn the victory.

The boys team finished with four racers in the top-10, three of which were in the top-5 on the day. Tait Kline ’22 was the fastest Big Green finisher, finishing in second place overall with a combined score of 66.18. He was quickly followed by teammates Achille Sarachek ’21 and Alexander Grosse ’22 in third and fourth place respectively. Nick Baker ’21 rounded out the Big Green scoring in the ninth spot to help the Doors secure their first team win of the season.

The Big Green ski teams will return to action next Wednesday, 1/22 at 3:15pm at Berkshire East in the second MISL race of the season.