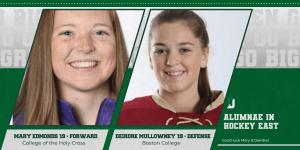 Two Deerfield alumnae – Mary Edmonds ’19 and Deirdre Mullowney ’19 – will face off tonight in a Friday night women’s Hockey East battle between the Holy Cross Crusaders and the Boston College Eagles. This marks the third time that these two teams and former teammates will face off against each other this season. To date, Boston College holds the 2-0 advantage in the 2019-2020 series.

Mary has had a strong start for Holy Cross during her rookie season, playing in all 26 games, and immediately becoming a penalty killer and key member of the team. In the Crusaders second season in the Hockey East conference, they are ranked 9th in Hockey East with a 3-19-4 record. Mary has posted 3 goals and 2 assists for 5 points on the season, coming in 4th on her team for overall points on the season.

Mary joined the Crusaders after a successful career at Deerfield. In her senior season, she garnered All-League Honorable Mention for All-NEPSAC forwards. She led her team to the most successful season that a Deerfield girls’ hockey team had earned since 2001, and helped the team to win the Watkins Invitational Cup for the first time in program history. Individually, she led the team in points, with 22 goals, and 11 assists for 33 points in 24 games in her senior year, earning her the MVP award for the 2018-2019 season.

Similarly, Deirdre Mullowney ’19 has also made an immediate impact for the Eagles during her rookie season, contributing to the defensive core at Boston College. The Eagles are ranked 3rd in Hockey East with a 13-10-3 record. This season, Deirdre has played a significant role in every game registering an assist in the team’s 3-2 win over Vermont in October. The Mullowney family has a legacy skating for Boston College; Deirdre is the fourth generation Boston College hockey player in her family. Her father Michael Mullowney ’85 (1985-89), grandfather Michael Mullowney (1958-62), and great-grandfather Edward Mullowney (1922-26, BC Hall of Fame 1972) all played hockey at Boston College. Furthermore, Deirdre and father share the legacy as Deerfield alumni.

While at Deerfield, Deirdre served as team captain her senior year. Alongside teammate Mary, helped the team capture the Watkins Invitational Championship for the first time in program history. Moreover, Deirdre was named to the Watkins All-Tournament Team, and helped the team to an overall 14-8-5 record. In her senior season, she scored 4 goals and 10 assists for 14 points in 25 games, proving to be a force in all three zones. Her performance earned her First-Team All-Star NEPSAC Defenseman honors in 2019. 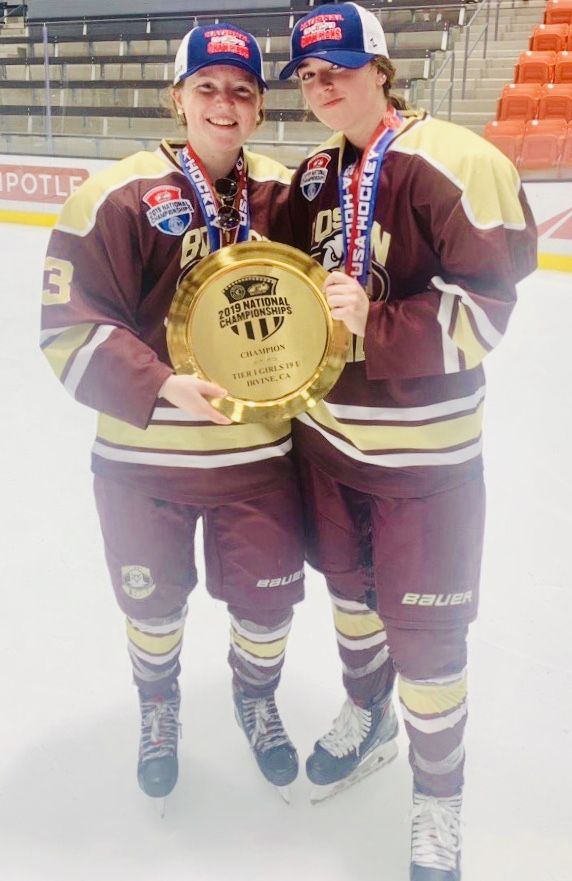 In addition to being former Big Green teammates, this duo were also Boston Jr. Eagle club hockey teammates. In their final season with the Eagles, Mary, Deirdre and their club teammates captured the USA Hockey U19 Girls Tier 1 2019 Championship last April.

Although now they find themselves on opposing benches, Mary and Deirdre  will always bleed green!

Good luck Mary & Deirdre! We will be cheering you on tonight!