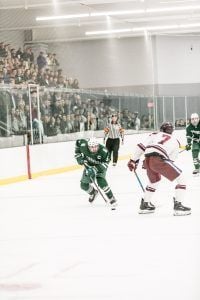 On the road at Kimball Union, the Big Green boys varsity hockey team jumped ahead to an early lead in the first period to earn the 3-1 win over the home team.

Owen Clifford ‘23, with assists to Connor Guest ’20 and Drew Garzone ’23, scored in the opening two minutes of play to give the Big Green the early lead. In next minute of play, Drew Garzone added an unassisted goal to double the lead.

Kimball Union answered with a goal of their own to cut the lead in half in the first period of play.

Both teams were shut out in the second period and the Big Green entered the final frame leading the home team, 2-1.

The third period remained scoreless until the final minute of play when Ben Zimmerman ’21 recorded an empty net goal on an assist from Connor Guest.

With yesterday’s win, the Big Green improve their season record to 5-5-3.

The team quickly returns to action on Friday, 1/24 at Pomfret and will travel to play rival Choate on Saturday, 1/25.