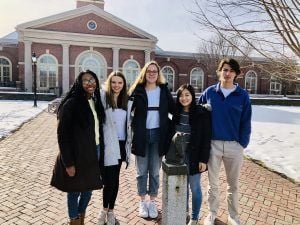 Lily Steinwold ’21 is the girls JV hockey AOTW. Lily has worked really hard in practice and has improved a lot over the past few weeks. Although she is relatively new to the game, she is fearless, humble, and hungry for goals. In fact, Lily scored her first goal this past Wednesday in our win over NMH and it was a beauty. She cleanly received a pass from her teammate before rocketing the puck into the back of the net and she celebrated as if she won the Stanley Cup! Her enthusiasm and energy make her a joy to coach and we are thrilled to have her leadership on the squad. Congrats on a great January so far Lily—keep the goals and celebrations coming!

This week we want to recognize Claire Cummings for her outstanding work ethic and tough defense as our center.  She has worked hard to battle against some of the biggest and best forwards in the league, and she never backs down, even when things get physical.  She can always be counted on to pull down a crucial rebound or stop a post move down low.  She is our floor leader on defense, and she always helps her teammates in the paint.  We are so glad to have Claire on the court!

The thirds girls basketball team’s player of the week is Samantha Pehl. Sam has improved tremendously since the start of the season, which is a testament to her hard work and positive attitude. She does not allow herself to get frustrated, and instead she consistently strives to find ways to make herself and the team better. Sam has the valuable talent of being both offensively aggressive and defensively strong, making shots and winning points whilst also protecting the rim and ensuring rebounds. Also key to Sam’s contribution to the team is her motivating and supportive attitude, which  helps to maintain a great team dynamic that we feel fortunate to have.

Hannah McKie is named Athlete of the Week for JV Swimming. Hannah’s irrepressibly positive attitude and hard work in practice contributed to significant improvements in the meet against Stoneleigh Burnam. Hannah’s willingness to learn new skills and execute them in races resulted in a 12 second drop in her 100 freestyle since the start of the season.

Emily Feng is named Athlete of the Week for JV Swimming. Emily won both the 100 Freestyle and 100 Backstroke in last week’s meet against Stonleigh Burnam. She also swam lifetime best times in both the 50 Butterfly and the 100 Freestyle. She is an up-and-coming star on this young and enthusiastic team.

This week the girl’s JV basketball team had an away game against Taft, and a home game against Exeter; with Deerfield pulling out back to back victories. With a 27-8 victory against Taft the girls established a run-a-way offense that couldn’t be stopped, and a stubborn defense. On Saturday, we played a talented and tough Exeter team that held the lead throughout the entire game.  But our girls never once quit and took the lead with less than two minutes left in the game and never looked back; walking away with a hard fought 25-21 victory.

In both games, Samara Cummings dominated the offensive and defensive boards, along with hitting clutch baskets down the stretch! She consistently plays unselfish basketball. Never one to look for a ‘pat on the back’ she is under the boards fighting for every rebound, tying up opponents, and calmly scoring key baskets when most needed. Her rebounding and scoring against Exeter was the difference between victory and defeat. She is a leader on and off the court and supports all of her teammates at practice and at every game! Congratulations Samara, continue to lead us through the rest of the season!

Emma Visnapuu earned the girls’ varsity hockey Athlete of the Week for her rock solid performances in both games, against NMH and Exeter. Emma battled hard and worked even harder, often being the first one into the offensive zone, as well as the first backchecker. Emma has a great shot, and had some awesome opportunities to score, generating lots of offense for the Doors.. she came very close to scoring on a few rebounds as well! We have been impressed by Emma’s team-first attitude, and work ethic all season long, and it was great to see her hard work pay off in the games. We look forward to the rest of the season and more great play by Emma!

The Varsity Wrestling athlete of the week is Mat Panikar ‘21. Mat walked on this year, wanting to keep up with DA Wrestling. Now he sets the pace! Mat’s not only a superb athlete with an indomitable work ethic, he’s also a juggernaut. Everything we practice in the Kravis, Mat brings to his matches; once he learns a skill, he’s got a weapon. He’s been unstoppable this season. At the Avon JV wrestle-off on January 15th, Mat pinned his opponent; he did the same against Andover last Saturday. But it’s not even Mat’s skill that impresses most. His cool, stoic demeanor, which masks his fervid intensity, makes him eminently coachable. Mat always listens agreeably, asks questions eagerly, and works his training partner hard. He’s an essential member of the team this year. We’re excited to see him test his skill at the upcoming league tournament!

Our AOTW is Alton Machen. He scored five goals on the weekend and was a consistent presence at both ends of the ice. His attitude has been awesome all year.

This week’s athlete of the week from boys JV hockey is Bodie Fish. Bodie is a delight to coach day in and day out. He practices at a high intensity rate and this enables him to perform consistently in the games for boys Jv hockey. He, along with line mates Felix Rockefeller and Aidan Philie, lead this team in offensive production while also setting the example for playing two-way hockey. Recently, Bodie’s game has edged upward and he was an integral part in the team’s first win of the season last Saturday; a 4-1 win over Andover. Keep setting the bar high Brodie. You, along with many of your teammates, keep getting better with every day!

Annalisa, a new sophomore, came to the team with limited squash experience, snagging one of the final spots on the roster out of try-outs. She began the season ranked twelfth on our ladder, far out of contention for one of the top seven spots that compete interscholastically. Yet week after week she has faced a tough opponent in a challenge match and come out victorious. Last week she ran her streak to four in a row and secured her place in an exhibition match at Andover. Now this week she will challenge for that official spot in the top seven that seemed such a long way off just a month ago. She’s done it all thanks to her dogged work ethic, he great touch and placement, and no shortage of good cheer. We love having Annalisa on the team and can’t wait to see how far she makes it this season.

George scored 18 points last week in our narrow loss to Avon and has been one of our leading scorers all season!