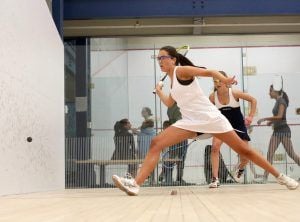 Former DA captain Ashley Manning ‘19 has seen immediate success at The University of Pennsylvania, and the Quakers are ranked #7 in the nation. Despite suffering a loss to #4 Stanford on November 22, Ashley worked hard to tie the match up, allowing her to win in four games at the #4 spot. She has continued that trend with an impressive 3-1 victory on December 7th in the 9-0 win against St. Lawrence.

While at Deerfield, Ashley was ranked 8th in the country by the US Squash rankings, and won the New England Championship with Deerfield in 2018, finishing second overall in the #1 flight, and also won the 2016 coaches award.

Former team co-captain, Harbor Woodward ’19 has made an immediate impact with the #1 ranked Harvard Crimson. She won her first collegiate match November 17th in the first contest of the season when Harvard beat #17 ranked Tufts, extending the university’s win streak to 66 matches. They now stand at 2-0 after beating Dartmouth 8-1, before picking back up with a match up against former teammate Ashley Manning and the Penn Quakers on January 11th.

During her time at Deerfield, Harbor was named captain in her junior and senior years, and received the Bayne Bowl in 2019 for her excellence in squash. She was a member of the 2017 and 2018 New England Championship team for DA, and helped the team win a #2 ranking overall.

Harbor joined Harvard junior and fellow Deerfield alumna Maddie Chai ’17, who also was a captain during her time at Deerfield. In her sophomore year at Harvard, Maddie won all six scoring matches she played in, and has been off to a similarly successful season in her junior campaign. Maddie clinched Harvard’s win against Tufts by defeating her opponent in the fifth pairing. She also notched another win in the team’s December 3rd game against Dartmouth.

Annie Blasberg ’16 is continuing to lead her team at Dartmouth competing at the #1 spot for the third year, as well as leading her team as captain in both her junior and senior seasons. In her freshman season, she competed in 14 matches at the #2 position. She’s posted three strong seasons for #11 ranked Dartmouth, and despite suffering two recent losses, Annie has been a great leader for her team. Annie’s coach Hansi Wiens said in a recent article, ” Annie’s incredibly strong work ethic, dedication to the team, willingness to challenge others thoughtfully, and leadership potential were among the primary reasons for why she was asked to co-captain the team last year. All of these qualities only became stronger and more pronounced throughout the season and her teammates and coaches clearly recognized that she’ll be the absolutely right person to help us navigate through the 2019-2020 season.”

Annie was a leader while at Deerfield too, captaining both the soccer and squash teams, and was named MVP of both in her senior year. She was also awarded the Jennie Maria Arms Sheldon Award for demonstrating excellence in academics and athletics and she was awarded William B. Jaffe Award for exhibiting courage, leadership, and sportsmanship in athletics.

Mimi DeLisser ’17 enters her junior campaign at Cornell after vaulting into a contributing role by tying for the team lead in victories on an 9-8 record from the middle three positions during her sophomore season. Furthermore, she won two of three contests at the Kurtz Cup, which her Cornell team also won. This season, Mimi and her teammates have kicked off their season with a 2-1 record before entering the break, wins came over St. Lawrence and William Smith. At Deerfield, Mimi helped the Big Green capture the 2017 New England Championship title.

These women have certainly made waves in the college squash world, and we look forward to their continued success this season!