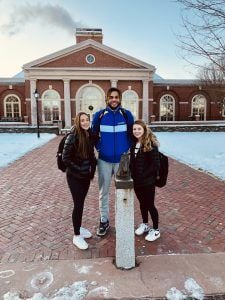 Congratulations to this week’s Athletes of the Week – the final nominees for 2019! Great work!

Our second athlete of the week is Katy Gilbert.  She has been an outstanding leader by example as a post graduate point guard.  She confidently takes charge of the ball in the back court and runs our offenses with precision and confidence.  She is always pushing herself in sprints and playing tough defense in practice in order to make her teammates better.  She handed out an impressive 12 assists in our win against St. Paul’s, which is just one example of how her unselfish attitude always shines through.  We are so thankful she decided to come to Deerfield this year!

On a team of fourteen players—most with little squash experience—returner Kaitlyn Kelly has stepped up and provided veteran leadership that has allowed us to hit the ground running. She has made great improvements in her game since last season and just narrowly missed the cut during very competitive JV tryouts. But rather than brood and sulk, she’s embraced her role as our Number 1 seed, and has cheerfully been willing to help rookie players learn the ropes, whether that means modeling effective deep serves or leaping in the air with arms flailing to show everyone how to do a star jump. At Miss Porter’s on Saturday, after dropping a close first game, she overpowered her opponent in the next three by a cumulative score of 33-12—her win sealing our team’s 6-1 victory. We’ll be relying on Kaitlyn all season, on and off the court, and are very fortunate she’s with us.

Jarod Harrington is our AOTW for picking up the first two goals of his Deerfield career against rival Choate on Saturday night. Jarod has worked hard on improving his consistency and it is paying off with a strong start to the season.

The Girls’ Hockey Athlete of the Week is CC DesLauriers ’23. From her first day on the ice with Deerfield, CC has been a steady presence in the defensive end, while also playing with confidence and being an offensive producer. We can count on CC to bring her smooth skating and smart defensive play in every game. This was especially true against top-ranked Nobles on Friday Dec. 13th. CC was very dependable in the D-zone, and also was a big contributor to the team’s offense, scoring a beautiful goal on an end to end rush. We look forward to her continued development this season!

Boy’s JV squash headed to St. Paul’s for a doubleheader with SPS and Belmont Hill, two of the top programs in New England.  Teddy won his first match 3-1 against SPS while the team dropped the match 3-4.  He played hard in the first match and had no rest before the second match against Belmont Hill.  With the overall match score DA 3 BH 3, Teddy was the last player on court but was down 1-2 in his match.  He fought hard, clawed his way back and emerged victorious, sealing a 4-3 Deerfield win!

We’d like to nominate Tysean Price as our AOTW. A returning player, Tysean has brought a great attitude to practice and games so far. He’s been working hard and we appreciate not only his work ethic, but also his leadership and guidance of the new students on the team.

Our nominee for boys varsity basketball is Deandre Ortiz. Picked to be co-captain by his teammates at the beginning of the season. Deandre has set a torrid scoring pace, averaging 23 points a game over our first 4 contests. This past Sunday, organizers at the Pioneer Valley Tip-off Classic selected Deandre as their “player of the game” in our win against MacDuffie.

Boys JV hockey would like to nominate Ryan Welch as this week’s AOTW. Ryan has returned to JV hockey for the first time since the end of his freshman year season. So far this season Ryan has been a tireless worker getting back his timing and sense of the game, In the early games of the season Ryan has been a regular on the scoresheet and is currently the team’s leading scorer. Best of all however, is Ryan has been leading by example through his hard work and team-first approach to everything. Keep working Ryan!

An intense competitor and focused, determined technician, Ros brings a clear mind and a fresh perspective to every match. At Worcester Academy on December 8th, Ros wrestled a white-knuckle match against Belmont Hill. He proved the very example of the coachable athlete: always listening, always learning, and always wrestling to win. In the Kravis, Ros is a quiet leader: he asks questions, shares his thoughts, and sets the pace in every drill. Ros has significant potential. We can’t wait to see the rest of his season!

The girls 3rds basketball’s player of the week is Arie Lewis-Pugh. Arie has been a great teammate and has quickly ascended to a leadership role with her voice and example. In practice and on the court, Arie brings an infectious competitiveness and intensity that carried us to our first win on Friday. Arie was not just the lead scorer in our win; she was undoubtedly the defensive player of the game, tallying 16 steals in 17 minutes. Make sure to come out to our next home game to catch her and the rest of the team in action after break!