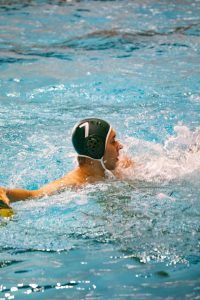 Thatcher Smith ’20 was named to the All-NEPSAC Water Polo Second Team for the 2019 season.   Playing his first full season on the varsity, Thatcher was the team’s leading scorer and chief playmaker.  Often guarded by the opposing team’s top defender, Thatcher adapted well, driving his defenders to a weaker position, varying his own shot selection, and looking to make passes that allowed his teammates to score.