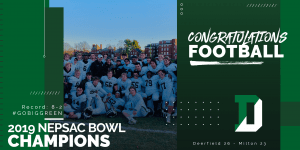 On Saturday, the Deerfield varsity football team won their seventh straight game and were crowned champions in their first bowl game win since 2002 defeating the home team and previously undefeated Milton Academy Mustangs 26-23.

The Mustangs opened the game’s scoring in the first quarter and the Big Green answered quickly on their ensuing driving scoring a touchdown of their own and converting the PAT. The Big Green scored another touchdown before the half making the score, 13-7 at the half.

The Mustangs opened the third quarter by scoring on their opening drive to re-take the lead 14-13. The Big Green struck back quickly on a Griffin Schutz touchdown on the ground to regain the lead 20-14. The Big Green defense was able to push back the Mustang offense on a first and goal opportunity, holding them to a 28-yard field goal.

On the ensuing drive, the Big Green marched the ball down the field for another touchdown to further their lead 26-17 with under seven minutes remaining in the game.

As time expired, the Mustangs scored a final touchdown to cut the lead, but it wasn’t enough as the Big Green had already sealed the victory 26-23.

Running back Griffin Schutz ‘21 was outstanding for the Big Green, carrying the ball 33 times for 166 yards and scored a season high 4 touchdowns (3 rushing, 1 receiving) in the win.  Wide receiver Noah Jones ‘20 had his best game of the season, catching 7 balls for 115 yards.

On defense, defensive end Marcus Romboli ‘20 had 2 sacks and was a force all day on the defensive line.  All four of the Big Green linebackers made big tackles and cornerback Porter Hollen ’20 sealed the game late in the fourth quarter with an interception in the red zone.

After starting the 2019 season with a record of 1-2, Deerfield won their last seven games to finish with an 8-2 overall record. Deerfield’s final win of the regular season, came over rival Choate Rosemary Hall, by a scored of 20-14, marking the first time since 2008 that the Big Green have defeated the Wild Boars in football.

Congratulations to the team, managers and coaches on the season!

Click here for the Boston Herald article on the championship game. 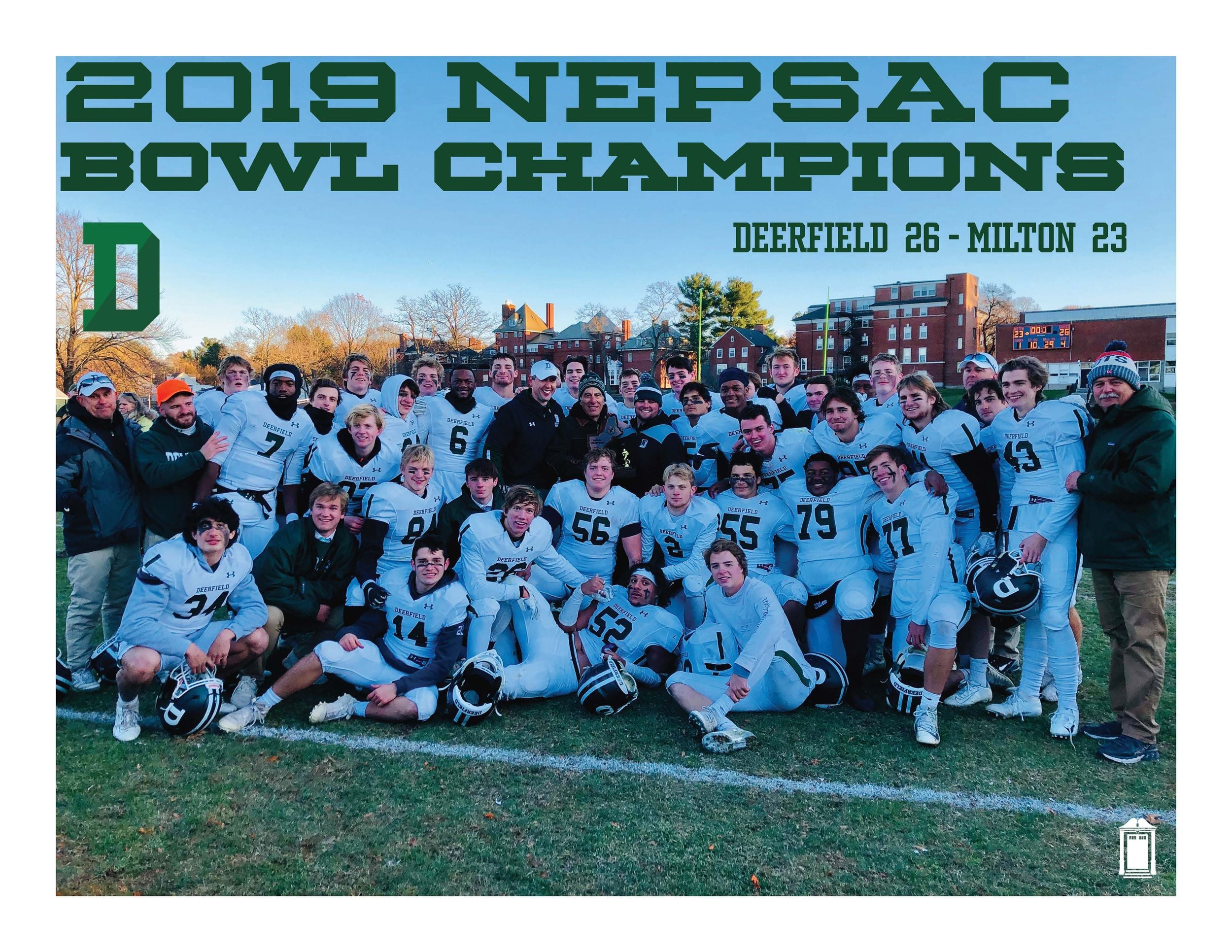