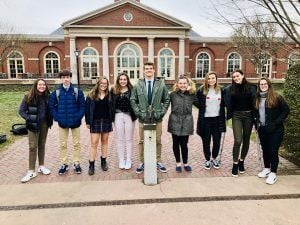 Congratulations to our final fall Athletes of the Week! A big shout out to all of our student-athletes on their fall seasons!

There are many different kinds of leadership and contributions to a team’s success and not all of them happen on the court during matches. For varsity volleyball, this week’s athlete of the week is Izzy McDonald ‘20. Despite not being able to play this season, Izzy has been an incredible source of leadership and encouragement to the team. She has been at every practice and every match, she has mentored younger players, and she has put the team first in all of her efforts. Congratulations!

Our final AOTW is Ella Hynds. Ella was a ROCK STAR defender for thirds soccer all fall. She always came to practice ready to work hard and have fun, and her positive spirit and focused diligence always helped to elevate the level of play. During games, Ella played defense with a quiet, consistent aggression that was an enormous boon to the team. Congrats, Ella!

Ashley LaBrucherie is Reserve FH’s athlete of the week.  Early in the season, Ashley cheerfully stepped into the role of goalie and never looked back.  Ashley worked hard all season to continually improve her skills in the goal, and she displayed a real knack for the position.  Ashley is quick on her feet, fearless in the face of opposition and humble with regard to her excellent progress as a young athlete.  She served well in a critical role on our small team!

In the last week of play, where the team played 3 games in 6 days, our Athlete of the Week is Abby Persons.  In all games, especially against Choate, Abby showed up for her team.  Abby serves her best under pressure and, with six serves in a row during Set #2 of our game against Choate she served us to a winning set which tied the game and moved the momentum in Deerfield’s favor.    Her skill, determination and encouragement of her teammates helped us earn 3 wins this week, including the most significant win of the year.  Thank you,  Abby!

Tom has stood out all season on a team with many promising ninth-graders. Coming out of try-outs our roster was shallow at the midfielder position, so we asked Tom to play the crucial outside middie position. Although that sometimes meant he was paired against faster athletes on the other team, Tom always hustled hard and he used quick-thinking to outmaneuver opponents. His hard work paid out in a big way in the Choate game, when he scored two goals. The only downside of putting him at midfielder this year turned out to be that we weren’t able to use him in goal. Tom’s an agile, accomplished keeper, who frequently impressed his teammates with his diving saves in practice.

The final athlete of the week for Varsity Field Hockey are our senior captains Liv Mikesell and Christina Halloran. As members of the team for four years, both players have contributed an amazing amount of their time and their talent to the program. Even before serving as captains of the team, they’ve demonstrated fantastic leadership and a love for the game of field hockey.

Having never played field hockey before coming to Deerfield, Liv was unsure of how her first season would play out for her. From the moment she stepped in the goal, she became an invaluable member of our defensive unit with her fearless attitude and willingness to learn and grow as a player and teammate. Over the course of this season specifically, she has come up with some key saves and maintained an impressive goals against average. She will be greatly missed!

Stina came to Deerfield and hit the ground running as a 9th grade member of our midfield and defensive unit. Over the course of her four years on the team, she has grown immensely as a player. Her incredible speed, smart play and lead-by-example efforts have earned her great respect by her teammates. On any given day, when asked who is working their hardest and leaving everything out on the field, Stina’s teammates would undoubtedly offer up her name without hesitation. She will be greatly missed as well.

Together, these two players are a model of what effective captaincy looks like. They lead with mutual respect, and know how to build and foster a family of players that plays for one another because they care about each other.

The final athletes of the week for the girls varsity soccer team are Annie Kane and Katy Gilbert.

Annie, a senior co-captain and three year member of the girls varsity soccer team has grown immensely as a player and person during her time as a Door. Annie is a leader by example, constantly taking care of the details and doing the little things to perfection. She is greatly respected by her teammates and peers for her tireless work rate and positive leadership and unwavering spirit. On the field, Annie is a technical soccer player with great vision for finding seems for through balls to her teammates, this season she initiated or assisted several of the Big Green’s goals. Annie will be greatly missed and we look forward to supporting her in her next chapter.

Katy a post-graduate student-athlete joined the girls varsity soccer team this fall and her presence on and off the field was immediate. On the field, Katy is a tireless worker with blazing speed that challenged opponents defenses every game, her work rate in the attack was equally matched by her work rate to track players defensively in the ever demanding outside midfield position. Katy made immediate connections with her new teammates, her competitive drive, positivity and happy spirit were contagious. Whether Katy was arriving to practice or just completed a grueling fitness activity, she had a smile on her face. We are grateful that Katy was a member of the Big Green girls soccer team this fall!

Caleb Newman has led the Deerfield football team’s defense to one of the most dominant defensive season’s in school history.  In the team’s first victorious effort since 2008 over rival Choate 20-14 Newman made big play after big play for the Big Green.  Not only did he shine on the biggest stage but he made 2 of the final tackles in a historic 4 down defensive stand inside of the 5 yard line.  Caleb plays the game the way it is supposed to be played with a big heart and big smile!!! His effort, grit, physicality and care for his teammates is remarkable.  Caleb led the team in tackles but the most important stat is that he starts off his Deerfield career at 1-0 against our rivals to the south.

Jean improved her time from the Nov. 2nd race at NMH by more than a minute to capture 49th place in the New England Championship race on Saturday.  Way to finish the season in style, Jean!

Thomas improved his time from the Nov. 2nd race at NMH by 23 seconds and finished just outside of All New England status by capturing 27th place at Saturday’s New England XC championships.  A great finish to a strong season for Thomas.