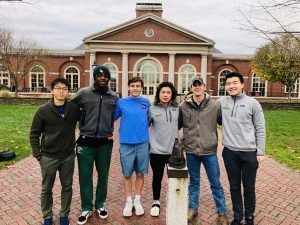 For varsity volleyball, this week’s athlete of the week is Zoe Gavros ‘23. In her first year, Zoe has stepped into a key on-court role on the team and she has also shown her enthusiasm, energy, and humor during practices and games. She works hard to improve as a volleyball player and she is incredibly supportive of her teammates. Great work!

Having worked their way up to starting roles on the varsity squad over their three years in the polo program, Mason Zhao ’20 and Justin Tang ’20 performed well in their final season, especially in setting examples for the younger players about the way to prepare and compete with poise and patience. Mason swam tirelessly in every game, working hard on defense and attacking well on offense.  Justin focused on his defensive awareness, becoming one of the players who effectively harassed opponents with a double-team traps.

The girls JV soccer athlete of the week is Kristine Yang. All season long we’ve been able to count on her to bring 110% every day to each drill in practice, and every game. Her speed is awesome, and her work ethic is unparalleled. Not only that, but in our most recent game against Hotchkiss, Kristine stepped up for the team and tried a new position (outside mid). She gave it 100% and even got two shots off! We appreciate all Kristine’s hard work this season and look forward to one last game together!

After missing half the season due to an injury, Marcel has returned to the field of play and made an immediate impact: in three games he has scored one goal and made three assists, and the team is currently on a three-game winning streak.

One of our co-captains, Chris ran a determined and gutsy race on Saturday at NMH to lock up the #6 position on our team heading into the New England championships.  Chris proved that you don’t have to be at the front of the pack to inspire his teammates, and lead the way toward achieving everyone’s best potential.

Victoria fought off an early challenge from NMH’s #1 runner to cruise to a big victory on Saturday, a great way to head into New Englands.  NMH’s course features a series of vicious hills, but Victoria battled through them without a moment’s hesitation, winning by more than a minute over her next competitor.  It was a great moment for Deerfield’s #1 runner.

JV Volleyball’s Athlete of the Week is Steph Martinez.  Steph has been a Setter for JV Volleyball for 4 years now.  She is also one of our Team Captain’s.   Steph has the ability to create winning plays on the floor and also inspire her teammates when they need it most.     Steph’s level of commitment and play led us to a solid win over NMH this week.  It’s hard to imagine JV Volleyball without Steph’s constant encouragement of her teammates as well as her great sense of humor.  As we look to Choate Day we will count on her setting and passing skills to lead the way.

This week’s girls varsity soccer athlete of the week is Regan Hoar. Throughout the entire season, Regan has demonstrated her strengths as a team player and competitor. She raises our level of play and intensity daily. Regan is a positive communicator and is always looking out for her teammates to support and encourage them. Throughout the season, Regan has been asked by coaches to bounce between different coaches and she is always willing to contribute where the team needs her. Thank you, Regan!

Matt Fiero is our athlete of the week. Matt scored twice in our 10-4 win over Cushing today and ended up as the leading scorer for the season.

Junior Tom Park is new to Deerfield this year and has been our most improved player. Early in the season he was overshadowed by returning students and more skilled players. But he’s come a long way and, in Wednesday’s contest against Loomis, he was most valuable player. As a defensive back, he frequently elicits gasps from the bench when he stealthily steals the ball from the opponent’s striker. But just as impressive is the steadiness of his play. He can be counted on to patiently keep the other’s teams offense confined to the sidelines, draining the momentum out of their fast breaks. Perhaps most we appreciate how much Tom cares about the team, how thoughtfully he reflects on each game afterward, and how cheerfully he goes about his work in practice.

Griffin Schutz led the big green in the team’s 6th victory of the season by pacing the team’s rushing attack. Griffin dominated the opposition’s defense with 31 carries for 178 yards and 5.7 yards per carry yielding one rushing TD.