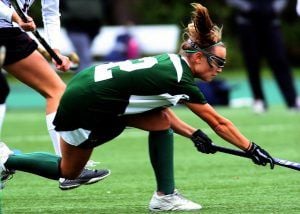 Elizabeth Growney ’16 is off to a great start in her senior campaign with the Bowdoin Polar Bears. In the most recent game at Trinity College on September 28th, the Polar Bears (7-0-1) defeated the Bantams (4-0-3) in a 4-2 win. Growney was the first of four different Bowdoin players to get on the scoreboard, giving the Polar Bears an early lead, scoring just 2:47 into the game. Her goal came off a rebound from an initial shot by her teammate Emma Stevens.

Growney has been on a hot streak, notching points in her last three games. She put away two of the three goals in the team’s 3-1 win against Wesleyan on September 21st, before following it up on the 24th with a goal and an assist in the 5-0 win against Wellesley. Growney also picked up an assist on the game-tying goal against Amherst on September 7th, tracking down a loose ball and dishing it to a teammate, to send her team into overtime, where they won 2-1.

In her career at Bowdoin, Growney has been very successful, both as a field hockey player, and as a lacrosse player for the Polar Bears. She’s started all seven games in her senior season, and already has four goals and two assists for 6 points in 8 games. During her junior year, she started in all 15 games, and had 9 points with 8 goals and 1 assist, with her team making it to the NESCAC Quarterfinals. In her sophomore season, she started in 15 of 17 games, with 3 points from 1 goal and 2 assists, and also played in all 16 games her freshman year.

While at Deerfield, Growney was a four-year starter on both the varsity field hockey and lacrosse teams. She was a 2014 Western New England Field Hockey All-Star and was the 2015 recipient of the Ramsay Cap, given annually to top lacrosse midfielder. In her final lacrosse season at Deerfield, she also received the Benjamin C. Haviland award. She graduated from Deerfield with athletic and academic honors, and has made an impact in both sports at the collegiate level. With Bowdoin being off to such a strong start this year, we hope her senior season will continue to be successful, starting with her next game against Hamilton October 5th.