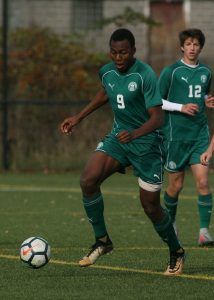 Cabrel Happi Kamseu ’18 is part of a #1 ranked University of Virginia team, that currently has a collective 19-2 goal ratio, and 10-0-1 record thus far.  Cabrel has been a key player for UVA, playing in 8 of 11 games this season, and notching the game winning goal in a 1-0 overtime victory against Western Michigan.

As a sophomore, Cabrel has had an impact on UVA since his freshman season, where he started in 14 of the 16 games, tying as leading goal scorer with 5 goals, and tying as the team’s top point scorer with 11. UVA finished last year with an impressive 10-4-3 record, falling to Notre Dame in the first round of the NCAAs. This year, they are building on that success, and on top of remaining undefeated thus far, they beat Notre Dame on September 28th in a close 1-0 victory, redeeming last year’s late season loss.

While at Deerfield, Cabrel was a post-graduate who made a huge impact immediately. He led the Big Green in scoring and points, and finished his final game for the Doors by scoring all 4 goals in the team’s 4-2 win against Choate. In one season at Deerfield, Cabrel scored 17 goals in 15 games, averaging an amazing 1.13 goals per game, setting a school record for most points in one season. He was recognized as a Western New England Prep School Soccer Association All-Star, and was invited to play in the NEPSSA All-Star game.

Good luck to Cabrel and the UVA Caviliers with the rest of the season!