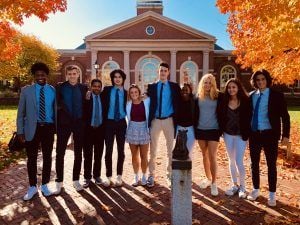 Thirds girls soccer’s athlete of the week goes to sophomore Jenelvis Rodriguez. Rodriguez has done a banner job temporarily filling in for our regular goalkeeper Stella Kerwin-Derrick, who has unfortunately been out with an injury. She has made impressive saves against some tough opponents, including during our two games against Bement. Both in and out of the net, Rodriguez consistently brings her characteristic confidence and active communication skills to the field to help the team succeed. Go Jenelvis!

Alex Judelson and Tysean Price are the boys Jr. B soccer athletes of the week. Alex stepped up to play goalie when our starter when down with an injury and led us to two victories last week. Tysean scored his first career goal against Eaglebrook on family weekend in our big 2-1 win to keep us undefeated.

With a tired, undermanned defense in front of him on Saturday, Wyatt Browne ’22 never faltered in the goal. The JV squad, playing with only one substitute, endured well in the game against Exeter, and Wyatt’s calm confidence was an inspiration to the field players as they went up and down the pool against faster swimmers.  Wyatt made a number of sterling saves, especially on two occasions when he blocked shots from opponents who were alone in front of the goal.

Captain Jared Faux has been a stabilizing force on our team all season. His calm, cheerful demeanor on the sidelines belies the intensity of his game. While he is a skilled forward with a great chip shot, he never hogs the ball and shows his younger teammates how to play smart. After a frustrating succession of games with near-misses, he finally scored his first goal of the season on Saturday in front of his family, saving the team from defeat in its Eaglebrook game. It won’t be his last.

The girls JV soccer Athlete of the Week is Kat Hioe ’20. Kat has been a big contributor not just this season, but since she joined the team. She always has a positive attitude and a great work ethic. Kat is a strong competitor and portrays good sportsmanship day in and out. This was especially evident in our game against Exeter, where she stepped up to play keeper for the team. She made some amazing saves, and kept our team in the game where she saw over thirty shots. We appreciate Kat’s efforts this season for our team!

The week’s AOTW for Varsity Field Hockey is Muffy Mazambani. Following a devastating ACL injury during preseason last year, Muffy was unable to play for the entire 2018 fall season. After working hard to rehab her knee and keep up with her field hockey all year, Muffy came back to school this fall firing on all cylinders. Since she has gotten used to her new position at center midfield, Muffy is a force to be reckoned with on the field. Her speed, stick skills, tenacity on defense and general level of play push her teammates to work hard in practice and leave our opponents unsure as how to defend her. Along with her high level of play, her fun-loving attitude, humility and the respect she has for her team makes her an absolute joy to coach and a wonderful teammate.

Cortland Dicks is the football teams athlete of the week for his efforts leading the team to a 28-0 victory over Philips Exeter Academy.  Cortland started off fast with a touchdown drive in the team’s first offensive possession which has been the case in every one of the Big Green’s opening drives this season.  On the day Dicks was an impressive 19 for 27 and 200 yards with two touchdown completions and another running touchdown on a big 4th down conversion.  All day Cortland kept us on track and the pressure on our opponent with his quick decisions and accurate passes downfield.

Noelle ran a smart, brave race to finish #1 for Deerfield on Saturday, just behind the winning runner from Exeter.  It was her best race of the season and a sign of great things to come!

Gabe broke 20 minutes for the first time on Saturday in a speedy race against Exeter.  Despite the race going out very fast, he ran smart and kept to his own race plan, resulting in a season-best time.

For varsity volleyball, this week’s athlete of the week is Georgia Sackrey ‘23. Georgia showed incredible flexibility and generosity in making the switch to outside hitter for this past Saturday’s match where she proceeded to serve 5 aces and record 5 kills! She has been a wonderful member of the varsity team this year by working hard in practice each day and being incredibly supportive of her teammates. Well done!

Cynthia Lugo is JV Volleyball’s Athlete of the Week.  In this past weekend’s game against Exeter Cynthia helped lead our team to wins in both the 3rd and 4th sets.  We can always count on Cynthia for her skillful setting and serving as well as her positive attitude.  Cynthia shows up at each game ready to play her best and have fun doing it!

In his first season of varsity soccer, sophomore Nyle Kamil has won a spot in the starting 11, where he lines up as either a wingback of a center-midfielder.  Nyle’s cool head and skill on the ball have made him an effective player and a reliable teammate.

Ruby is a tireless worker, a passionate competitor and empathetic teammate. From creating 1v1 scoring chances in practice this week to being the team DJ during warm-ups, Ruby provides the girls varsity soccer team with her positive energy, work rate and her upbeat personality. Ruby is a pleasure to coach, she consistently implements coaching feedback into her game to raise her level of play. We look forward to Ruby continuing to make a positive impact on the team this season! Thanks, Ruby!