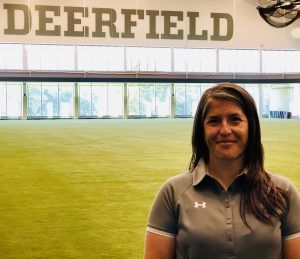 On August 26, in the final week of preparation for the upcoming fall 2019 season and academic year, the Deerfield Athletics Department welcomed Cathy Markowski to its team. Cathy joined the Big Green as the Athletic Stockroom Coordinator. She will be working alongside Deerfield veteran Norm Therien in the stockroom.

In the first week of the school year as Deerfield fall teams begin their 2019 seasons, Cathy has had the opportunity to meet several returning and new student-athletes and coaches at her stockroom window.

Cathy arrives to Deerfield with a wealth of athletics experience. In the fall of 2018, she coached the Loomis Chaffee volleyball team to a NEPSAC Class A championship. Prior to Loomis, Cathy was the head volleyball coach at Division III Worcester Polytechnic Institute and Elms College. While at Elms, she earned 2007 North Atlantic Conference Coach of the Year honors and helped her players garner Player of the Year and Rookie of the Year honors. Cathy coached the Deerfield volleyball team in 2008 and coached the Turners Falls High School volleyball team. In addition to her time teaching volleyball, Cathy also taught Physical Education. A former University of Massachusetts student-athlete, she has been actively involved at the club level as a coach at the Northwest Junior Volleyball Club and the Husky Volleyball Junior Olympic Club. She lives in Feeding Hills, MA with the two Chris’ – husband and son – and their lively chocolate lab Chopper.

Welcome, Cathy! Please stop by the Athletics Stockroom to say “hello” and introduce yourself.