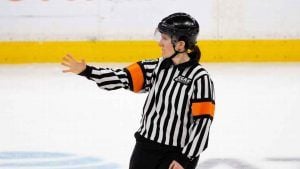 Recently, Katie Guay ’01, was one of four women to officiate the NHL Prospect Tournaments in Anaheim, CA. Marking the first occasion that an NHL affiliated event has included women officials. The tournament included NHL prospects from the Golden Knights, Sharks, Ducks, Kings, Avalanche, and Coyote teams.

Guay is not a stranger to making headlines for her officiating prowess. Since donning the stripes on the ice in 2006 after graduating from a successful collegiate hockey career at Brown in 2005, she has officiated at the highest levels including; the International Ice Hockey Federation (IIHF) and the PyeongChang 2018 Olympic Winter Games. Notably, Guay was joined at the PyeongChang games by fellow official and Deerfield alumna, Jess LeClerc ’04. In addition, Guay has officiated countless women’s National Collegiate Athletic Association (NCAA) games at the DI and DIII level, including the coveted Winter Classic. In 2015, Guay made headlines by becoming the first woman to officiate a men’s NCAA DI collegiate game, and this past year she was one of four referees to officiate the historic men’s Beanpot Tournament at the TD Garden. Marking the first time a female official called a game in the 67-year history of men’s Beanpot tournament.

When asked about her career as a hockey official, Guay said in an interview with USA Hockey, “There are many females that came before me that had the skills and abilities to get on the ice at a men’s game. They weren’t given the opportunity. I’m representing them when I do games like this and also creating paths for future females who aspire to work high-level hockey.”

In an interview with The Sun Chronicle Guay said, “Through high school, I played soccer, softball and lacrosse, but hockey really became my passion.” In her time at Deerfield, her love of the game pushed her to succeed, and she finished her career for the Doors tallying a staggering 74 goals and garnered All-New England Prep School honors in her senior season. As a DI student-athlete at Brown, Guay enjoyed a four-year career, garnering team MVP honors and  secured her name in the records books for most games played (128) and most goals in a game (5). “Title IX allowed me the chance to be a student athlete at the collegiate level and I am grateful for the opportunity to expand my knowledge of the game and continue to be part of the sport I love,” said Guay when asked about her collegiate playing career by HERStory.

When she is not on the ice officiating games, Guay is the USA Hockey Foundation’s director of philanthropy for the Northeast region and recently, she returned to campus as a keynote speaker for the new Athletics Complex dedication in October 2018.

Guay has been paving the way for female officials, and opening doors and new opportunities for girls and women since her Deerfield days. We look forward to seeing what new trail she blazes next.